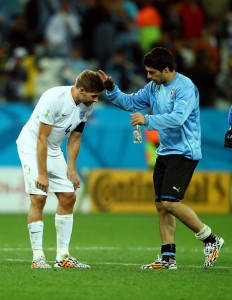 England’s World Cup dreams are hanging by a thread after defeat to Uruguay last night, and according to experts at SOS Rehydrate, The FA only have themselves to blame for not properly preparing their players for the conditions in Brazil.

Dr Blanca Liazola, founder of SOS Rehydrate, said: “It’s clear that The FA has their hydration strategy all wrong. England have been by far the worst effected team at the World Cup when it comes to dehydration, and that just points the finger at their poor preparation!”

Traditional isotonic sports drinks have too much sugar and not enough electrolytes to rehydrate effectively. SOS Rehydrate has three times as many electrolytes as traditonal sports drinks and is the only sports rehydration product that utilises the World Health Organisation’s oral rehydration solution standards.

Dr Lizaola said: “There were signs later on in the Italy game that players were losing concentration due to dehydration. Wayne Rooney’s corner was a classic example. When players get routine things that wrong, and others are suffering cramp, you have to point to dehydration. The FA have scored a major own goal in this World Cup”.

SOS Rehydrate is the only sports rehydration product that can be compared to an IV drip to treat dehydration effectively.

You won’t be betting on England anymore, after their embarrassing exit, but there are plenty of better hydrated teams you could use your World Cup free bets on.