Posted in English, Premier League, Statistics By By Far The Greatest TeamPosted on August 3, 2013July 13, 2017

The first prize will be £100, with monthly prizes which will be detailed on this site over the coming months. Its free to join, so please pass on to anyone who might be interested.

So, I’ve done my usual this season of analysing the first six fixtures and tried to come up with a plan which might give an early season flyer to anyone who takes any notice.

The first thing I did was to rank the teams in terms of difficulty. I did this using a points system. Initially I took last seasons league table and applied a score based on the finishing position of each team. For example, Manchester United have 20 points, and Sunderland 4. The three promoted teams were given 3, 2 and 1 based on where they came last season.

This score is then applied to each weeks opponents and an overall score for the six week is obtained. For instance, if Arsenal are at home to Manchester United, they would be given 20 points. I also decided to weight the away fixtures, to all away game points are doubled. So if Arsenal are away to Man United, they are given 40 points.

As a result of this, the highest score over the first 6 weeks indicates the team with the hardest fixtures and vice versa.

After initially running the numbers, I tweaked around with the scores a little based on what I think might happen this season. I gave Man United, Man City and Chelsea 21 points each, as I feel any of them could win the league. I bumped Arsenal and Spurs up to 18 and 17 as I feel they are clear of the 6th best team. I also lowered WBA, WHU and Swansea’s scores to 10, as I am not convinced they will perform like they did last season, although I could perhaps be wrong in Swansea’s case.

The final table gave interesting results. West Ham have the easiest games in the first few weeks, with games vs Cardiff, Hull and Southampton to name three. Manchester City, Liverpool, Norwich, Arsenal and Spurs also have a fairly nice start to the season.

At the other end of the spectrum, Chelsea have a tough start, with trips to Man United, Everton and Spurs. Aston Villa have the hardest start, opening with away games at Arsenal and Chelsea, with home games vs Liverpool and Man City.

There is a slightly unusual anomaly with this seasons games. Both Chelsea and Villa have a double game week in week 1. I don’t remember this happening before, and certainly makes for an interesting decision with the initial team selection.

I have attached the spreadsheet I used as my comparison tool. Feel free to bastardise it as much as you like. I have protected the sheet, let me know if you need the password.

Here is the table sorted in ease of fixtures. West Ham, have the easiest, Villa the hardest. 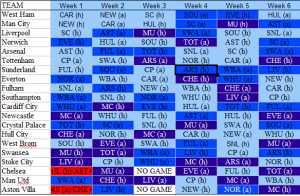 I will now attempt to come up with a shortlist of players to consider with picking your starting team. The first thing thought about was the double game week, a good start can be vital in this game, certainly if you are taking a punt on players you wish to make money on.

I decided that the Chelsea double game week is too good to resist. Home games vs Hull and Villa could mean a huge number of points for their players. The one problem being that it’s the first two games of the season and we really do have no idea who the starters will be, and how many of them will play in both games.

In this situation it is usually best to go with the players that you are certain will play twice. So for me this was Petr Cech and Ashley Cole. I would expect at least one clean sheet vs Villa and Hull, so I think this is a fairly safe option. Elsewhere, Hazard and Mata will play at least one game, and possibly two, so I went for Hazard based on price alone, and the fact I think he will improve markedly this season. Up front is probably best to avoid, as who know who will start out of Lukaku, Torres and Ba, Although I was tempted to gamble on Lukaku, possibly a good cheap bench option for the season. Other Chelsea players I considered with Ivanovic, Luiz and Azpulcieta.

Being an Arsenal fan, I do like to pick at least 2 players from the side where I can, and given we have quite an easy start, it shouldn’t be too hard to get them in. Koscielny at £5.5m is a must. Easily Arsenals best player in the second half of the season, he is guaranteed to play if fit, and I do fancy him for the odd goal here and there. Midfield is tough. Both Walcott and Cazorla are both a little pricey, but certainly should be considered, as should Arteta, who I presume is still on penalties.

Up front, I’ve gone with Giroud at £8.5m. It seems likely that Arsenal will continue pursuing Luis Suarez, who isn’t available for 6 games, therefore Giroud should, I imagine, start the first few games. Given the fixtures that Arsenal have, I think its a safe play to stick him in. I did consider Podolski, but I’m not sure where he will start the season. So in summary, Koscielny and Giroud, whilst considering Walcott and Cazorla if you can afford either of them.

Of the top teams, Manchester City have the easiest set of first six fixtures. Home games vs Newcastle, Hull and Man United, are coupled with trips to Stoke, Cardiff and Aston Villa. As a result of this I intend to have three City players. The problem lies with selection. Who will play. The signings of Negredo, Jovetic , Fernandihno and Navas have increased competition and made it harder to predict who will play.

Zabaleta was one of the defenders of the season last year, and I’m sure he will be a regular this season, but he’s pricey. Nastasic was superb last season but has picked up a serious injury in pre season, meaning Joleon Lescott should step in for the first few games. Cheaper than Zabaleta, he is my first one in. City are also a much better side with Silva in. So I’ve plumped for him over Navas. It could be a mistake, Navas could have an immediate impact and his price rocket, but I think I’m willing to wait. This however might change over the next two weeks, but at present I’m going with Silva.

Up front is the interesting one. I have a feeling that Edin Dzeko, in spite of the signings, will start the season. He has looked very sharp in pre season, so for £7.5m I’m going for him. Negredo is obviously a class player, but at £9.0m he is too much of a risk at present to include. Aguero is £11m, and too much for me at this time. Jovetic could quite literally be anything.

West Ham have a decent start as well. So I’ve decided to take Winston Reid and Joe Cole. They are both cheap at £5m, and should start the majority of games. Good solid bench options, and the week Chelsea don’t play, they have Stoke at home, so you can replace your Chelsea players with WHU ones in a favourable fixture. Other players I thought about were Andy Carroll (not fit) and Guy Demel.

Southampton also have a fairly nice start, so I chose Luke Shaw. An up and coming left back who will surely cement his place in the side this season. At £4.5m he could be one of the bargains of the season. Clyne is also £4.5m, and I guess that choice is a bit of a coin toss. I went for Shaw, but Clyne is of equal worth I think. Lambert is another to consider, especially as he is on penalties.

Spurs are an odd one in fantasy football terms. A decent side, but aside from Bale, they don’t really have a high scorer. I’m making the assumption that Bale is off, it seems almost certain. Therefore I’m going for Lennon. He may well enjoy the increased responsibility once Bale leaves, and at £7.5m is cheaper than I thought he would be. Vertonghen and Lloris are also good options, but are priced accordingly. Soldado has not yet been added, but anything around £8.5m should be thought of as a good price, I may well include him if he isn’t too pricey.

Elsewhere I’ve gone for Giacherrini from Sunderland and van Wolfswinkel from Norwich. Two absolute punts. They could be awful and out of my team by week 5, or they could be inspired signings at relatively cheap prices. I have no real idea what either will do, but both have the potential to outscore their price. Other potentials to think about are Bony at Swansea, Delofoleu at Everton, Weimman at Villa and possibly even Sanogo at Arsenal, especially if they don’t actually sign a world class striker. He will certainly get game time.

As for the second goalkeeper, well its actually quite an important decision. I like to pick a 2nd GK who plays at home when my main GK is away so I have the option of rotating. I’ve gone for Cech early, mainly because of the double game week. So my keeper needs to be at home when Chelsea don’t play, in week 3 and then alternate home and away with Cech. This can be narrowed down to Swansea and in particular Michel Vorm.

So here is my current team 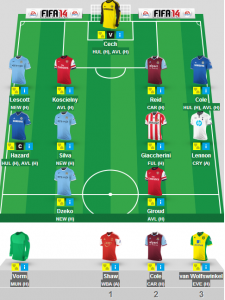 I do hope this is of some help, even if you only use it for fixture analysis. Good luck.