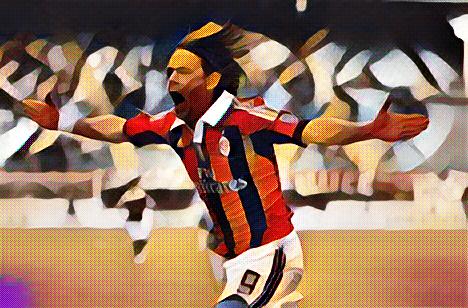 When thinking of a clinical ‘fox in the box’ the person that comes to the top of that list is none other than Filippo Inzaghi. The Italian talisman whose accolades rank him up as one of the most clinical strikers in World football; ‘Pippo’ as he is known in the Italian media, backs up his goal tallies with a number of championship medals to go with it. This article is a tribute to one of the greatest strikers to ever come out of the great footballing nation of Italy.

Filippo started his career – along with his younger brother Simeone – at his hometown club Piacenza, where he came through the ranks. Before he made his name at his boyhood club he spent 2 seasons out on loan at Albino Leffe and Hellas Verona, where he scored 13 goals for both clubs. After impressing at both clubs his opportunity at Piacenza finally came. Young Pippo scored a very impressive 15 goals in 37 games and helped his side win the Serie B title and gain promotion to the top flight; his reputation and stock value was starting to rise as one the most promising youngsters in Italy.

Inzaghi always played with his heart on his sleeve and that passion oozed out of him; his iconic goal celebrations were the epitome of his passion. So many of my Football Italia memories are of Inzaghi racing towards the corner flag, sliding onto his knees with his hands over his face; the emphatic enthusiasm shown was clear that every goal he scored meant the world to him. All except when he scored against his hometown club Piacenza for new club Parma, where the emotion came out in a different way; making Pippo cry.

Things didn’t work out for Pippo at Parma and the following season he moved to Atalanta where he was out to prove his critics wrong and showed the nation that he had the eye for a goal and finished the season as the Capocannoniere – Serie A top scorer – with an incredible return of 24 goals in 33 games.

That’s when giants Juventus made a move for the Young player of the year for a £10 million price tag; a sign that Pippo was developing into a top player that Juve wanted to take the gamble on. Pippo would link up with Juventus great Alessandro Del Piero and the incredible Zinedine Zidane forming a real attacking force. Inzaghi scored a good return in his first season with the Bianconeri scoring 18 goals, winning the Supercoppa and the Scudetto; he also reached the Champions League final but only managed runners up medal as Real Madrid were victorious on the day.

The following season for Juve  was very disappointing, however Filippo was the shining light as the Bianconeri finished 7th in the Serie A; for Filippo he showed how clinical he can be by netting 20 goals. This form carried on into the following season as Pippo scored another 15 goals; Juve though missed out on the title with Lazio pipping them to the post.  Another 16 goals in the following season saw Pippo crowned Juve’s top scorer for the third consecutive season.  For Pippo though, his time at Juve was drawing near. The Bianconeri signed young starlet David Trezuguet and Pippo was subject to sitting on the bench. That’s when Milan came along, the club Inzaghi will be most remembered for playing for.

In the 2001-02 campaign, AC Milan paid around £17,000,000 for Inzaghi but a torrid knee injury kept him out for the opening part of the season. That being said, Pippo formed another formidable partnership with Milan great, Andriy Shevchenko. With an incredible career at Milan, Pippo notched up 300 games for the Rossoneri hitting the back of the net 126 times. A few serious knee injuries limited his playing time during the mid-00’s and the early 10’s but he was pretty consistent banging in the goals. His most prolific season was 2002/03, his 2nd full season with Milan, claiming 30 goals in 49 games.

What made Pippo such an effective poacher was his natural instinct in front of goal. Without being blessed with blistering pace he would still manage to play on the shoulder of the last defender and make those darting runs through on goal. His sense of awareness, anticipation of the through ball and positional play was second to none.  His idol was another great Italian striker; Paolo Rossi, whom his playing style was often compared with.

As well as raking in the goals, Inzaghi also has a vast amount of titles to his name from his time at Milan: 2 x Serie A, Coppa Italia, 2 x Super Coppa, 2 x Champions League, 2 x UEFA Super cup and is also a FIFA Club World Cup winner.

But it isn’t just club football that Pippo managed be successful in. Filippo was the Azzurri’s leading striker in the EURO 2000 helping his country reach the final, but defeat by France on golden goal rules denied him a winner’s medal.  Due to his persisting knee injuries, Pippo was called up to the World Cup 2006 squad but was not a main starter. Only making 1 appearance at the finals, he still came away with a winner’s medal to go along with his already large trophy cabinet. On the international stage Inzaghi scored 25 goals in 57 games, once again a fantastic ratio of goals per game.

Inzaghi is the 4th highest scorer in European club competitions with 70 goals, only Raúl, Cristiano Ronaldo and Lionel Messi have scored more. He became the first player to score two Champions League hat-tricks whilst at Juventus; he then scored a 3rd at Milan.

Despite his goal scoring talent, Pippo was often criticised for being a ‘selfish player’ and not linking up with the team during build up play. That simply wasn’t his style, he knew what he was good at and he stuck to it. Managers saw what he could offer and they exploited it. He was often moaned at by the Italian press for being injury prone due to his knee problems, despite that he continued to play at the top level and retired at Milan in 2012 at the age of 38, bowing out with yet another goal. It was the end of an era at Milan with Alessandro Nesta, Clarence Seedorf and Gennaro Gattuso all hanging up their boots that year. Milan subsequently have been underachieving ever since, is it a coincidence that a core of legends leave the club at one time and since then the club have failed to live up to expectations? Maybe so.

Needless to say regardless of your opinion of Filippo Inzaghi, he was a clinical goal scorer and one of the last true goal poachers. Will there be another true ‘goal poacher’ that follows Inzaghi’s footsteps and if there is will he be as successful as Pippo? Is there even place for one in the modern game now? These questions are all hypothetical of course but facts stay the same; Filippo Inzaghi was a great Italian goal scorer, was passionate, clinical and a key figure in ‘Football Italia’ nostalgia.