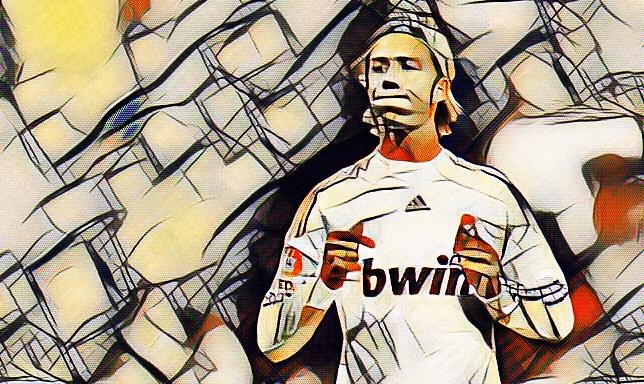 José María Gutiérrez Hernández was one of the most talented players of his generation, capable of moments of sheer magic. His unique ability and creativity stood out even at one of the biggest clubs in the world. Revered for his flair, Hernandez was a serial winner who collected 16 trophies at senior level, including three Champions Leagues. You may know him simply as Guti, a genius of a footballer who made over 500 appearances for Real Madrid and became a true club legend.

Madrid through and through, Guti joined the famous Real Madrid youth academy “La Fabrica” at the age of 9. He began his youth career as a striker before being moved into a playmaker role. His talent was recognized early and he progressed quickly within the youth ranks. After a season with Real Madrid C in the third tier of Spanish football, Guti was selected for the Spanish U18 squad to take part in the European Championships in Greece. Guti starred in the tournament as Spain went unbeaten, notably scoring in the final, a 4-1 victory over an Italian side featuring Buffon, Pirlo, Ambrosini and Totti. Upon his return from Greece, Guti was promoted to Real Madrid B for the following season.

Sparkling form in the second division with Real Madrid B, earned Guti his first call-up to the first team. Former Madrid star and youth team coach Jorge Valdano gave the teenager his debut at the Bernabéu in December 1995. Guti slowly began to establish himself in the first team, making eight appearances in Madrid’s final eleven matches of the season as Real Madrid finished in a horrendous 6th place in La Liga. The Madrid side that Guti broke into was much different to the team of Galácticos of this century. In Guti’s debut season (1995-96), Real Madrid’s first team featured nine players who had come through the academy, including stars Raúl and Manuel Sanchis.

The signing of Clarence Seedorf from Sampdoria in the summer of ‘96 meant Guti made only sporadic appearances over the next two seasons, starting just twelve times in the following two campaigns. During this time, Guti became a reliable player off the bench as Madrid won the league in 1997 and the Champions League in 1998. Still just 21, Guti was again selected to represent his country at youth level, this time at the U21 European Championships in Romania. Guti appeared in all three matches as Spain won the tournament, giving Guti his second European Championship victory at youth level.

Under new manager Guus Hiddink, Guti managed to become more involved in the first team, starting seven consecutive league matches from November to January. Unfortunately for the Spanish midfielder, Hiddink was sacked in February and replaced by John Toshack who returned Guti to his regular role as an impact substitute, preferring a midfield three of Seedorf, Campo and Redondo. Despite the change in manager, Guti appeared a career best 36 times for the club and was rewarded with his first call-up to José Antonio Camacho’s Spain squad. Guti made his Spain debut in May 1999 in Seville against Croatia.

The following season, Guti started 35 matches and scored eight in all competitions as Real Madrid finished 5th but won their second Champions League in three seasons. Despite missing out on Euro 2000 with Spain, Guti had truly established as a regular in the Madrid midfield. The summer of 2000 was a time of change in Madrid, an engineer named Florentino Pérez, became president of the famous club. Pérez wasted no time making additions to the European champions, spending €122 million on six players including Luís Figo and Claude Makélélé.

Even with the new signings, Vicente del Bosque kept his faith in the young academy graduate. With the competition for midfield places fiercer than ever, del Bosque often used Guti in a more advanced role. Guti responded with the best goal scoring season of his career, scoring an impressive 18 goals in all competitions as Madrid strolled to the title.

The addition of a certain Zinedine Zidane into an already crowded midfield meant Guti started less than 30 matches for the first time in two seasons. Still, Guti played an important role in yet another Champions League winning side, starting both legs in the Semi-Final win over Barcelona. At the age of just 25, Guti had broken through into the Real Madrid first team, made over 200 appearances and won nine trophies with the club, including three Champions Leagues. With his skills and creativity with the ball along with his rockstar image, Guti threatened to become one of the true superstars of the game.

Even as the Galácticos kept arriving, Guti maintained his position in the team, and in 2003 was named vice-captain by Carlos Queiroz, a role he could keep until he left the club in 2010. As the years went on, Guti became a useful tool to numerous managers, capable of playing behind the striker, in various center midfield roles and even on the wing. Occasionally linked with a move to receive the first team football that his talent deserved, Guti remained loyal to Real even as competitors to his place arrived on an almost yearly basis.

As the years went on, Guti remained influential but was reduced more and more frequently to cameos from the bench, often with great success. He had the potential to produce magical performances in a short period of time. On one such occasion in 2007, with only a half hour to play and Madrid down 1-0 at home to Sevilla, Guti was introduced in place of Raúl. Less than 20 minutes later, Guti had turned the match around almost single handedly, producing two wonderful slide rule passes for Ruud van Nistelrooy and Robinho. With just five matches to play in the season, the result proved vital as Madrid won the league by way of head-to-head record over arch-rivals Barcelona.

Guti’s seminal moment in a Madrid shirt however, would come in his final season with the club. Away to Deportivo in January 2010, Guti found himself one on one with the opposing keeper. Instead of shooting, Guti produced a spectacular back-heel into the path of Karim Benzema, completely fooling the goalkeeper allowing the Frenchman to tap into an empty net. This moment, described brilliantly by Spanish paper Marca as the “back-heel of God” encapsulates Guti perfectly. Guti could do things with a football others couldn’t even imagine.

Guti played 15 seasons for the biggest club in the world, making over 500 appearances and winning 15 trophies. Even during the rise of the Galáctico era, he managed to stay relevant through 19 managerial changes. This longevity at a club like Madrid is almost unheard of, yet Guti will never be as revered by the football community like his colleagues Iker Casillas and Raúl. Despite all the great moments, Guti’s career sadly consisted of too many “what-if” moments. Guti fell out with numerous managers, had several off-field controversies and often failed to perform in the biggest matches. It is telling that a player of his ability and charisma never featured for his country at a major tournament.

After his departure from Real Madrid, Guti enjoyed one more memorable season in Turkey with Besiktas. The first name on the team sheet, Guti scored 11 and assisted 14 in 37 matches, leading the club to the Turkish Cup title. Guti retired from football in 2012 and has since become a youth coach at Real Madrid.

A footballer with flaws, Guti played the game the way it was meant to be played, beautifully. A maverick and a genius, Guti was capable of anything every time he stepped onto the pitch.