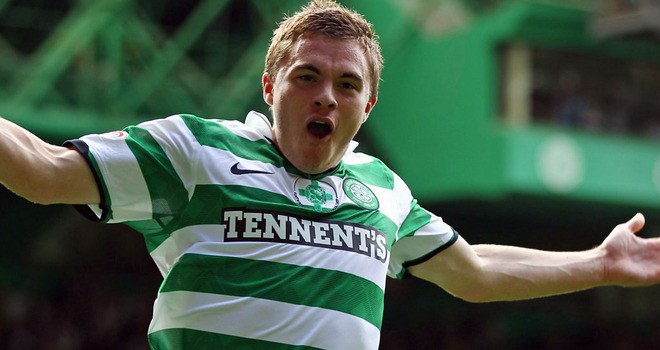 James Forrest passed on the chance of following in the tennis shoes of Andy Murray to fulfil his ambition of becoming a professional footballer.

Despite a phalanx of coaches telling the young Scot he had the potential to make it as a top tennis star, Forrest stuck to his guns and devoted his efforts to honing his skills with a football.

And 15 years later and with a clutch of silverware to his name wearing the green and white hoops of Celtic, the Hoops wideman can be satisfied with his choice.

And Forrest, 25, delivered a stunning display and nabbed a goal as Brendan Rodgers’ side beat Aberdeen 3-0 at Hampden to win Betfred League Cup, their first trophy of the season.

It was Rodgers’ first pot as Parkhead manager, but it was ton-up for Celtic as they collected their 100th major cup with the victory.

Former Liverpool manager Rodgers has overseen an unbeaten campaign so far for the Celts, and he was more than satisfied with the outcome against the Dons.

He said: “It’s a winning club, that’s what the history of this club has been based on. It marks a milestone, the century of trophies and we’ve got to start off the next century of trophies. That will be important for us and the club.”

Forrest snatched Celtic’s second goal after Tom Rogic opened the scoring and Moussa Dembele wrapped up proceedings from the spot. And he says he and his teammates want more glory.

He said: “The boys have been looking forward to winning trophies, and we put in a great performance from start to finish. We started strongly and right from the start we were creating chances. We scored some good goals and could even have scored more.

“I was delighted to score in the final and now, with the first trophy in the bag this season, hopefully we can just kick on now and win more.”

That makes it five league titles, two Scottish FA Cups and two league cups on the honours board for Forrest. He may not be Andy Murray but the Paradise faithful will argue he is still their very own wee smasher.

Everything you need to know about Manchester United target Wanyama

Are Liverpool a one Mané team?