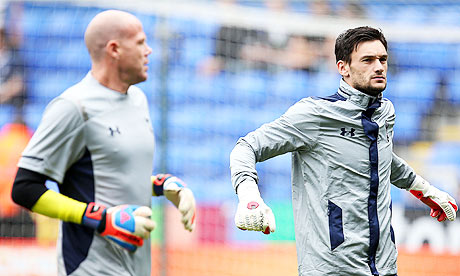 When new Tottenham manager Andre Villas Boas opted to sign the French goalkeeper Hugo Lloris, during the summer transfer window many of football commentators, and those who bet on these things at sports bet and online casino gambling sites, were wagering on Brad Friedel’s days with the White Hart Lane club being numbered. The American appears to see things differently however, and has stated that he is more than happy to remain at Tottenham and fight to prove he should still be first choice keeper.

The 41 year old American has played in goal for Tottenham’s first three league matches of the new season, and proved to be a saviour for his side in their most recent match against Norwich suggesting that he still has much to offer the team as they fight to regain a Champions League place. However he acknowledged that Lloris represents a serious challenge to his status as the club’s first choice between the sticks:

“Hugo Lloris is France’s No 1 and he’s going to want to come in and play; it’s a friendly competition if you like. You have to understand Hugo Lloris is going to be a team-mate, not an enemy.”

However there have already been indications of tensions with Lloris publicly stating his surprise and dismay at not going straight into the first team upon his arrival at White Hart Lane, and indeed few online casinos newcasinosonline.org and sports betting sites would have put money on him not going straight into the side. Then again few would have bet on Tottenham struggling as much as they have during the first few matches of the new season, but there is little question that the veteran American goalkeeper has been one of their few outstanding performers during a sluggish start under Villas Boas. Whether this will be enough to prevent him losing his place to his high profile rival remains to be seen.