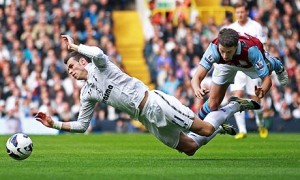 It seems almost every time Gareth Bale plays I have to attempt to rationalise all the controversy over his alleged diving. He’s been booked five times this season, only of which three of those occasions were for simulation – although it remains ambiguous whether his aim was to cheat or perhaps simply negate a foul to his advantage. Is there even a difference? If you’re fouled, that should be enough to see you rewarded with a free kick or penalty in your favour. But then perhaps there sits the problem, all alone on the ground looking up sympathetically, waiting to be validated. It shouldn’t be perceived as a reward, simply a consequence of the opposing player stopping you from playing.

You’re probably confused at this point, which is fine, because so am I when watching football along with most including the referee and the player involved in the incident. I’m beginning to think it’s the narrative that brings Gareth Bale plummeting down to the ground, its weight to heavy to hold up. Is he to blame? I’d prefer to simply state that everyone involved is responsible. All Gareth can do is accept accountability with it and perhaps stop concerning himself with attempting to influence the outcome when someone sets out to stop him.

Let’s take the last yellow card dished out to Tottenham’s Welsh wing wizard. Running through towards goal against Sunderland, a knee to his leg sees Bale lose balance and down he goes. Was there contact? Yes. Do you need to fall to the ground to be given the decision? No. Could he have remained on his feet and continued running? I don’t know. He knows. I don’t. At the pace, speed he was running at there is a strong possibility that contact will result with him taking an unavoidable tumble. So if he can remain on his feet it might be to the detriment of possession (meaning he continues to run, but loses the ball, or the ball loses him). Would the ref award a penalty in those circumstances? I’m not sure he would because they’d be a strong case to argue that the player displayed strength to stay on his feet and continue. Although in other areas of the pitch, sometimes fouls are committed, play continues, and when the ball is out of play the ref dishes out the deserved punishment (if not just blowing up and awarding it straight away).

So, if he can’t stay on his feet, does he attempt to simply tumble naturally like someone tripping over a concrete slab in the street whilst running to catch a bus? Gravity eating him up unapologetically. No. Why? Well because of a couple of reasons. Three things to be exact.

Firstly, we can’t trust referees to be consistent. Some give free kicks others wouldn’t in the same circumstance. There is always something lost in translation but it’s made easy when the narrative comes into play. In this case, Bale has a reputation, so if he hasn’t been blatantly hacked he can’t have possibly been fouled.

Secondly, the hype. The hype (that reputation) surrounding Gareth is that he has a habit of doing this. Doing this being ‘going down to ground too easily’. The fact he has gone down too easily in the past means that (unfairly) not every incident that follows is viewed as an isolated incident. It comes attach with baggage…If he’s gone down easy before, he’s probably going down easy again. Why does he go down so easily in the first place? He’s been hacked down a couple of times, been out injured because of it. When Bale is actually fouled, unquestionably fouled, he can remain sitting on the turf waiting for treatment longer than other players. Self-preservation, the fear of injury plays out in his mind too often. He’s got some stick (from the Spurs faithful) about being a bit soft. Although quite how a player can be criticised for making sure he’s okay, I don’t know. He’s hardly rolling around on the floor screaming his head off. He’s not arching his back or dramatically, theatrically landing like a piano thrown off a building.

Which leads us into the third…

What appears to have happened is, Bale is over-thinking things to the point that when he is fouled, when there is contact, if he thinks there might be contact – it’s already in his head to accept the easy way out. We can’t sit around and debate what constitutes actual diving or cheating and where perhaps that line is blurred. Well, we can debate (or rationalise like I’m doing now), but it’s not relevant as the only person with the power to do something about it is the player at the centre of it.

If a hard, dirty looking tackle is incoming and Bale wants to avoid it by sliding away and falling down – then he should, as long as he dusts himself up without a cheeky glance to the ref. If he’s going to get booked for it, so be it. If he’s actually avoided injury by second guessing, so be it. He’ll have to take the hit. The irony is, he’s done that a fair few times and it’s not helped. The fact he always claims innocence suggests he’s more than aware of the game he’s playing.

So the alternative is, if contact is made, anywhere on the pitch, stand your ground. If you attempt to stand your ground but still go down then there is little chance of the ref giving the free kick the opposite direction. Why? Because the sheer force of the foul/contact has instantly unequivocally crashed you down into a heap. Don’t exaggerate the foul, don’t allow that pull of gravity to so easily embrace you.

You still confused? Of course you are. I’m dizzy from it.

Its ridiculous there should be any discussion on this at all. A foul is a foul. We all know what it looks like. The problem is, Bale is on a hiding to nothing if he continues glide the tackle. Take Defoe against Sunderland. Now that was a dive. No contact, a blatant attempt to cheat to claim a free kick. Where is the extensive analysis, the narrative, the pointing fingers? How did the ref translate that compared to the incident where Bale was carded?

Remove the ambiguity, remove the hype and remove any doubt from the man in black with the cards.

Bale is growing in confidence, he’s progressing to greatness, gradually but surely he’ll get there. Modern footballers know how to play the game. Wasn’t something they did back in the day when ‘footballers were footballers’ but these days, there is a culture of making sure you’re awarded a free kick, when it is a free kick, but by doing so it clouds the judgement given by the officials. So in that respect, Bale isn’t completely innocent.

I don’t think Bale is a cheat either. He’s Neo in the Matrix trying to stop the bullets when he should really just allow himself to be shot.