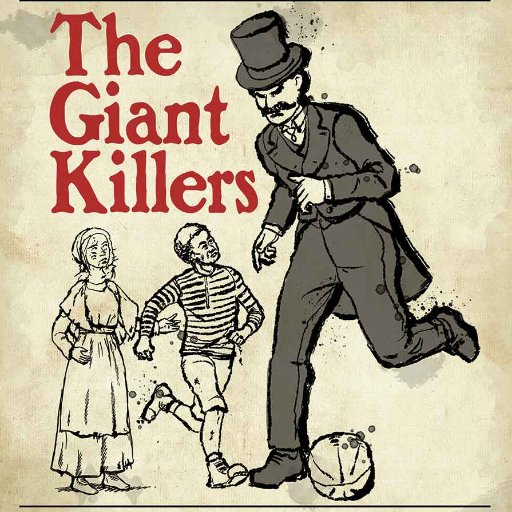 “People always think of Football as a working class sport but it started as a game for the upper classes” explains Andrew Pearson-Wright, co-writer of The Giant Killers which opens at this summer’s Edinburgh Festival.

“It was played at Harrow and Eton and then at Oxford and Cambridge University’s and when these men graduated they wanted to carry on playing. The first football teams were made up of lords, knights, peers, university lecturers and the wealthiest members of society. The first decade of the F.A. Cup saw it dominated by The Wanderers (a team made up of former students of Harrow school) and The Old Etonians. It was the gentleman’s game played by gentleman. On the other hand, the ball games that were played by workers were a lot closer to Rugby. They used their hands more, the tackling was vicious.”

So when did it change?

“Well that’s what our play is about. In my opinion, it’s down to one group of Mill Workers from a town called Darwen in Lancashire. They were the first working-class men to play in the F.A. Cup, they reached the cup quarter finals in 1879 where they played The Old Etonians. The tie captured the public’s imagination; it was billed as David versus Goliath on a football field, the rich versus the poor. All though we don’t want to give away any plot spoilers, the game was a classic, if it hadn’t really happened we would be accused of making it unbelievable.”

So why would a group of workers decide to play in a competition that was just for the upper classes?

“I think it was the idea of competition, it gave their games meaning. Ironically that was the main reason that there was opposition to the F.A. Cup in the first place.”

There was opposition to the F.A. Cup?

“Oh massive opposition, remember this was a game for gentlemen. It was a past time, something you did for fun, people were scared that the minute you made it competitive it would become ungentlemanly. But they had to do it, if they didn’t football would have died”

What does he mean I ask? How did the cup save football?

“This is something I’d never heard before” he begins

“But, when I started writing I went to the F.A. and met with their historian, they have a library at Wembley, it’s brilliant, they have records of the first meetings that the football association held, the minutes everything, it was a football geeks heaven, anyway the first few meetings were really well attended, lots of teams starting up, lots of enthusiasm but month by month they got smaller in attendance. It reminded me of running a five a side team, the first few weeks you’ve got six subs and by the end of the season, you spend all your time asking mates if they can bring anyone from work because only three people have turned up. Anyway, I can’t remember the actual figures but it was ridiculous, something like only five people turned up to one meeting but then they decided to start the cup. There is a strong case for saying that if it wasn’t for the F.A. Cup then association football would’ve died out. Who knows what we would be playing today? There were other ball games that could’ve taken it’s place, who knows maybe Rugby would’ve become the number one sport!”

But they started the cup and interest grew again. The cup had been going for six years before Darwen entered for the first time and their participation changed football. Once workers had players they could get behind they fell in love with it. By the time the football league started in 1888 most of the teams were from the north and almost all of the players were working class.

“The sad thing is their contribution has been largely forgotten but hopefully this play will change that.”

And what does he think of the F.A. Cup now?

“I still love it, I think it’s been a great season. All they need to do is give the winner a Champions League spot and it will be what it was, I’m sure of that.”

And how do you bring football to the stage? Do you show the matches?

He smiles “That’s what everybody keeps asking. We do, it’s a challenge especially on the small stages you get at The Fringe but we’ve found a way to do it that we are really proud of.

“I’m a football fan and I’ve always wanted to see a good football story. There are loads of good boxing and basketball movies, some good baseball movies but football? They’ve all been crap. But yes, you have to get the matches right, if people don’t buy that then it won’t work.

“But it’s not just about football, I co-wrote it with my wife, the actress Eve Pearson-Wright, she can’t stand football but she loved these characters and wanted to bring them to life. It’s more like Brassed off or the film Pride, it’s about community.

“It’s not been easy to get this far, people keep telling us that people who like football won’t go to the theatre, its snobbery and it pisses me off. But they thought that about football too, there were too many rules, the common man wouldn’t understand it, it was a graceful game for gentlemen but Darwen changed that. They are our inspiration in more ways than one.”

The Giant Killers is on at The Rose Theatre (promoted by The Gilded Balloon) in Edinburgh at 2.30pm from the 2nd to the 28th of August. You can follow the play on twitter @LongLaneTheatre