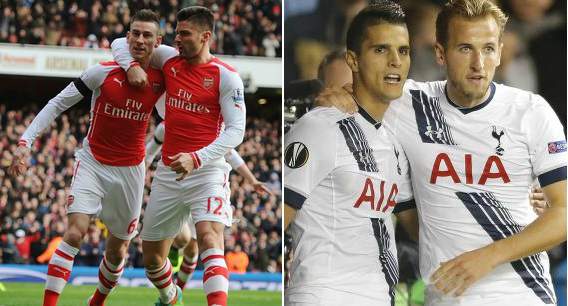 Arsenal are set to play two consecutive derby in the space of a week as they confront Tottenham Hotspurs on Wednesday in the Capital One cup.

Boss Arsene Wenger is expected to ring some few changes to the team, following injuries and suspensions, however, the Frenchman will have his team set up for all three points against Mauricio Pochettino side.

French striker Olivier Giroud who was benched for Arsenal’s clash against Chelsea at Stamford Bridge last Saturday is to assume duties in the centre forward position of the team as Theo Walcott will be rested. The former Montpellier forward has received some flaks for his abysmal performances for the Gunners this season and, he will be hoping to hit the ground running against Spurs tomorrow evening at White Hart Lane.

Also, Petr Cech who could do nothing to prevent his former side from finding the back of his own net on two occasions will also be given a rest by Wenger, allowing Colombian goalie David Ospina to come in between the sticks.

Veteran midfielder Mikel Arteta is expected to come into the Gunners’ starting XI in the absence of Santi Cazorla, after the Spaniard received his marching orders for two bookable offences against Chelsea on Saturday. Arteta will likely be partnered in midfield by Mathieu Flamini – who could be playing for Arsenal for the first time this season – and Welsh midfielder Aaron Ramsey will also be in line to start the game, as Alexis Sanchez could also be rested.

Arsenal will be hoping to bounce back from defeat after having slumped last Saturday. Wednesday opponents Tottenham ran out 1-0 winners over Crystal Palace on Sunday courtesy of a goal by Korea international Son Heung-Min.