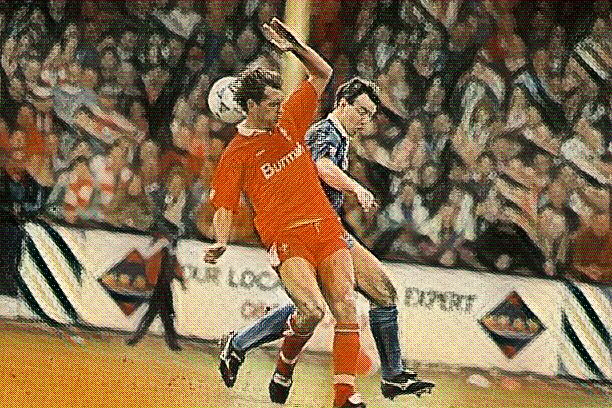 In 1991 Swindon were dealt a blow when manager Ossie Ardiles resigned from the Division 2 club and joined Newcastle United.

But every cloud has a silver lining. The club approached Glenn Hoddle and offered him the role of player manager. Hoddle had not long returned from France after playing for AS Monaco for 4 years, his career curtailed after a knee injury forced him out of playing football at the high level.

Hoddle joined Swindon Town during one of their toughest periods. Swindon had gained promotion the previous season, only for the team to be demoted back to Division Two after the club admitted to illegal payments. The club were struggling, having had to sell some of their players and after the scandal, the team found themselves battling against relegation.

Hoddle had 8 games to keep Swindon up. With the club in 17th they needed to turn it round and fast, which he managed, but only just, with two wins and one draw securing Division 2 football. The club managed to stay up by two points.

The 1991 / 92 season was Hoddle’s chance to show what he could do as a manager. Having made just slight changes to the team he kept up the year before, this season he changed the way the team played.

He introduced a 5-3-2 formation. The idea was to use wing backs to flood the midfield but also give an attacking balance on the wings. Hoddle himself played sweeper. The club, even though financially they were struggling, had signed centre back Shaun Taylor for £200,000 from Exeter. The team was still strong with players like Micky Hazard, Ross Maclaren, Dave Kerslake, Duncan Shearer and Martin Ling.

The season started badly, drawing against Leicester and then losing to Cambridge United. But as confidence in the players grew playing a new formation and playing fluid football, the results in time came. Their next 12 games they only lost on two occasions. The results they were getting were excellent, with wins against Sunderland 5-3, Watford 3-1, Plymouth 4-0 and Ipswich 4-1. Goals were not a problem for the team and Duncan Shearer was on fire. He had already scored 10 goals in 14 matches.

They continued their good form, but despite losing only once, to Southend 3-2, they could only muster two wins – a tricky 1-0 against Portsmouth and all three points versus Millwall. But it was the seven draws that had damaged their run. Shearer though, had continued scoring for fun, heading the Swindon scoring charts with 16 goals. Steve White alongside Shearer was also chipping in with his fair share of goals with White scoring 10 goals.

Scoring was not a problem for the team, but for Swindon it was trying to turn the draws into wins.

However, January was a disappointing month, losing 3 games before turning it round again with impressive wins at Bristol City 2-0, Brighton 2-1 and a goalless draw against Grimsby Town. Then, as the pressure began to tell, disaster struck. Swindon lost their next 4 consecutive games to Middlesbrough, Oxford, Charlton and Newcastle.

Paul Bodin had been brought in as a more attacking wing back in the hope of getting the club back on track. But with Swindon falling away, the pressure was beginning to mount. Yet, with Hoddle’s guidance, the club put together a fantastic run of games, Shearer scoring both goals against Tranmere in a 2-0 win and then grabbing another goal in the 3-1 victory against Southend.

Then came the news all fans had been dreading. Blackburn Rovers had put in a bid for Duncan Shearer. The striker had been excellent and had scored 32 goals, but £800,000 was too much for Swindon to turn down. With the club in dire financial straits it was a large amount of money and Shearer left for Blackburn immediately.

Swindon had 9 games left to push for a playoff place, but without the goal scoring exploits of Shearer they struggled. Admittedly they only lost one game which was the final game of the season, but by then it was too late. Once again they were unable to turn the draws into wins. The last 9 games were so frustrating for the fans and for Hoddle. But drawing 5 games put paid to any hopes of making the playoffs. Swindon finished 8th just five points short of the playoffs.

Hoddle felt at the end of the season that had the club not sold Shearer, then they would have made the playoffs and gone up that season. It was a bitter pill to swallow for the Swindon fans and the club. For the Englishman with the bad knees however, he had managed to play in 25 games that season.

After the previous season of just missing out on the playoffs, the Swindon supporters were on a high. They felt this time the club could gain promotion this time around. Glenn Hoddle had the team playing fluid attacking football, and with John Moncur and Craig Maskell arriving along with Dave Mitchell playing upfront. The team seemed high on confidence. With Hoddle playing as sweeper he was joined by captain Colin Calderwood and Shaun Taylor in the three man defence.

The 1992/93 season started well with wins over Sunderland, Bristol City, Cambridge and a draw versus Wolverhampton. Hoddle himself scored an amazing goal against Sunderland on the opening day of the season. But the next four games brought the club back down to earth. Losing to Millwall and Charlton, they then only managed draws against Bristol Rovers and Oxford.

But the team were playing good football and started to find some form. They beat Watford 3-1, Notts County 5-1 and beat fellow promotion hopefuls West Ham 1-0. Swindon found themselves in second place and the supporters began to believe that this was their year.

However it was short lived, and they struggled for the next few months. They only managed one win in November beating Southend and lost both games in December against Derby 4-2 and Leicester 4-2, who were also chasing promotion.

They had dropped away and needed to turn things around, and they did. The team stepped up to beat rivals Millwall 3-0, Tranmere 2-0 and leaders Newcastle 2-1. They had lost only twice in 12 games, suddenly Swindon were back in contention. After a disappointing loss to Tranmere they bounced back with wins against Luton 1-0 and a classic 6-4 victory against Birmingham, this was after the team had been 4-1 down. The fans were ecstatic.

With Swindon in 6th they were now 7 points in front of the next placed team Millwall who failed to bridge the gap, even though Swindon finished the season poorly, failing to win in their last four games.

The fans however, had started to flock back to watch the club play entertaining football, with attendances over 10,000. For three games over 15,000 packed into the tiny County Ground.

Swindon Town had made it into the playoffs. They now faced Tranmere Rovers over two legs in the semi-final. The first leg was at home.

Tranmere with Pat Nevin and John Aldridge in their ranks would be no easy match. In front of a packed County Ground, Swindon took a 3-0 lead inside 30 minutes an own goal by Vickers and a goal apiece from Mitchell and Maskell. Despite Tranmere grabbing one goal back, Swindon had a 3-1 lead to defend in the second leg.

The second leg was a tight affair, but Swindon took the lead with a goal from Moncur. Tranmere hit back but Craig Maskell scored with a shot inside the area. Although Tranmere had won 3-2 on the nights, Swindon had won 5-4 on aggregate. They had made it to the playoff final. Leicester City would be their opponents having dispatched Portsmouth in their semi-final 3-2.

Come May 31st, 73,802 supporters were inside Wembley ready to watch the playoff Final. The game was a classic.

The first half was fairly quiet until with just three minutes of the first half remaining up stepped player manager Glenn Hoddle to put Swindon 1-0 up and take the score into half time. The fans were buzzing inside Wembley and the Swindon players reacted immediately after the second half. Craig Maskell scored after good work by Moncur. Swindon were flying and when Taylor headed in number three it looked all over for Leicester.

But next came a crazy 12 minutes. Julian Joachim pulled one back for Leicester, followed by Steve Walsh. Suddenly the game was 3-2 and the Foxes had the momentum. Steve Thompson scored Leicester’s third goal to bring the teams level. The Swindon defence which had been strong throughout the season was rocking. With 6 minutes left on the clock the Leicester keeper brought down Steve White in the area. Referee David Elleray, without hesitation, gave the penalty which seemed slightly harsh. Paul Bodin was the man to step up. Bodin, who had had an excellent season, showed nerves of steel as he slotted the ball home, sending the Swindon faithful into raptures.

Swindon held out until the final few minutes to claim a 4-3 win and send the long suffering Swindon fans into a frenzy of excitement. The club had finally been promoted to the top division for the first time in their history and this time they would not be demoted back down.

The club had played some scintillating football throughout the season – attacking teams from out wide, with the wing back pushing forward on many occasions.

Hoddle was incredible during the promotion season, playing 44 times in the league. The majority of the attacks started with Hoddle. His raking diagonal passes to the wing backs seem to cause the opposition so many problems. He had wanted his wing backs to push up and attack and he found them with his dazzling array of passing playing as sweeper. He may have lacked pace, but his vision and technique were superb. In his role, he was able to dictate the play and start attacks from deep.

Where Swindon excelled was defensively, they were extremely strong at the back making it difficult for teams to beat them. Even though the vast amount of talk was around Hoddle, the defence and a midfield of Hazard, Ling, Maclaren and Moncur were superb. Praise must also go to the forwards, Craig Maskell scored 21 goals that season, with 12 coming from Mitchell. But Bodin and Shaun Taylor were exceptional at the back scoring 12 apiece.

With Swindon back in the town and parading the trophy thoughts were already on next season. Fans had already heard the rumours of Glenn Hoddle perhaps leaving to join Chelsea. The Swindon Town faithful sang ‘Glenn don’t go’. But the joy and jubilation of that season was short lived as just days later Glenn Hoddle left and became Chelsea manager.

John Gorman took charge of the club going into the Premier League.

It was a bitter pill for the Swindon fans to swallow, losing Hoddle after two successful seasons. Would Glenn Hoddle have kept them up in the Premier League? Probably not, but their task was made all the more harder without him. The team lost his vision on the pitch and his managerial skills off it. Hoddle had built a great team who played football the right way and his tactics were spot on.

Swindon Town supporters called Hoddle Judas for years to come, especially when they played Hoddle’s new team Chelsea. But as time has worn on, the Swindon Town faithful have slowly started to mellow and appreciate what Glenn Hoddle had done for the club. When you think that this was a club with financial constraints, having to sell their best players, what Hoddle achieved was unbelievable.

It has been a rollercoaster ride for the South West of England team, but they will never forget the Hoddle years. Not only having Glenn Hoddle grace the County Ground but the football that he brought with him and passed down to the team.

It really was an exciting time to be a supporter of Swindon Town FC.