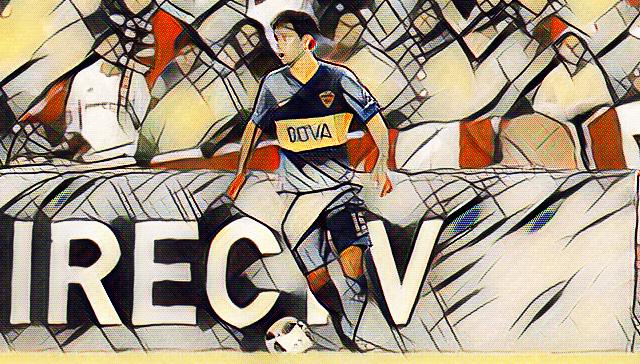 Gonzalo Maroni stole the limelight on Sunday evening as Boca Juniors stayed three points clear of the chasing pack in the race for the Argentine title. In a 3-0 victory over Arsenal de Sarandí at La Bombonera the 18-year-old scored a spectacular volley and left the pitch to a standing ovation.

Like Juventus’ Paulo Dybala, Maroni started his career with boyhood club, Instituto de Córdoba, before switching to Boca for £500,000 in December 2015. Maroni made his debut for Instituto as a 16-year-old in Argentina’s second tier, making five appearances for the side he had joined as a ten-year-old. But when Boca came calling it was impossible for the youngster to say no, and the transfer fee also helped ease Instituto’s money worries.

On Sunday evening Maroni played at the tip of a diamond, behind forwards Dario Benedetto and Cristian Pavón, impressing with his pace and direct play on his full debut. Boca took the lead after just five minutes following nice link-up play between the two forwards, with Benedetto scoring against his former club. Benedetto then sealed his brace in the 25th minute following neat work from Colombian Wilmar Barrios, bagging his 14th league goal of the campaign in the process.

On the hour Boca launched a rapid counterattack, as Fernando Gago released Frank Fabra down the left-hand side. The Colombian full-back centred the ball in the direction of Benedetto, seeking his hat-trick, although it was cleared by the Arsenal defence. The danger, however, wasn’t over and the ball fell to Maroni 15 yards out. Maroni caught the ball sweetly on his right foot, his volley giving the Arsenal keeper no chance whatsoever. Ten minutes later Maroni was substituted, receiving a rapturous applause from a crowd saluting their new hero. Memories that no doubt will remain with the youngster for a lifetime.

The hapless Arsenal, who were league champions less than five years ago, meanwhile are in huge danger. The club is propping up the league table with only 11 points from 22 games, and a goal difference of -26. Relegation is looking almost certain unless there is a huge change in fortune for the club.

The title run-in looks like it will go to the wire, with several clubs pushing Boca all the way. Newell’s Old Boys remain in second, three points adrift, following a 1-0 win away to Huracán. Ignacio Scocco bagged the vital goal with an assist from former Blackburn Rovers forward Mauro Fórmica. The surprise package are Colón de Santa Fé who are six points behind Boca following an incredible seven match winning streak. At the weekend they thrashed Sarmiento 4-0 away from home. Estudiantes and San Lorenzo are a further two points back, and then River Plate occupy sixth place, nine points behind their fierce rivals from La Bombonera.

The next few games will be key for Boca and will go someway to deciding where the title ends up this season. Boca’s next three games all come against teams in the top six, with an away trip to La Plata to face Estudiantes up next. Then comes the Clásico weekend, as all 30 teams are paired up with their rivals for one bumper derby fixture date. Boca will host their fiercest rivals River Plate, who could go into the game only six points behind if results go their way in the next round. Therefore the tie will be crucial. After that Boca face Newell’s Old Boys, once again at home. If Boca manage to emerge from those ties unbeaten there is a great chance they will finish the season as league champions come the end of the season. However, it is impossible to predict and it seems like the Argentine title race will go down to the wire.