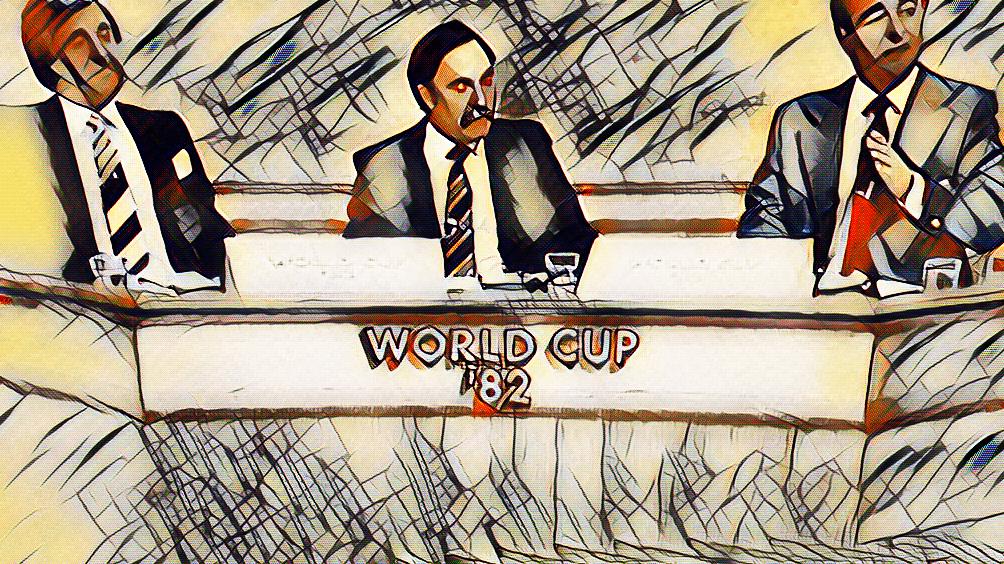 When you sit down and plan your viewing for the upcoming World Cup, there will be a plethora of choices available with virtually every match live. 1982 was my favourite tournament yet so much of it was only available via a highlights format.

My first World Cup was the 1978 tournament in Argentina. FIFA hadn’t quite switched on to the power of television to propel the tournament up alongside events such as the Olympics, so many of the matches were available via highlights packages only. Yet 1982 presented BBC and ITV with a great opportunity to showcase the event. An expanded tournament of twenty four countries meant more matches. There were thirty eight matches in Argentina, yet this time there were thirty six in the First Phase alone.

But television had not really taken the plunge with football. The eighties were gradually realising its pulling power but the authorities and executives were concerned with hooliganism and the image of the game. This tournament should’ve been a dream for viewing figures. In 1974 and 1978 Scotland were Britain’s only representatives, yet this time England and Northern Ireland joined them.

The matches were being played at prime time for a European audience with most of the first round giving us three games in a day, either two afternoon games or two in the evening, kicking off at 4.15pm BST or 8pm BST. Ideal.

Yet the coverage was patchy and began in a farcical manner.

These days we’re expecting nearly every game live with broadcasters using multiple channels, but back in 1982 there were only three, BBC1, BBC2 and ITV.

BBC and ITV shared the broadcasts between them with neither wanting to compete. What you need to remember is back in those days there was no live league football, this didn’t come in until the end of 1983. So the only live matches we got were the FA Cup Final and England v Scotland in the British Home International Championships. The League Cup Final wasn’t live and not even all England matches were live. Some of the qualifying games were shown live, though and even Wales game at home to USSR was live on a Saturday in June. We had been a little spoiled with having the European Cup Final shown live for the past six years, but then that was because English teams had won it every year (Liverpool 77, 78, 81, Nottingham Forest 79, 80 and Aston Villa 82).

The British Home International Championships was generally played during one week at the end of May, although by 1982 it was coming to an end with some matches played earlier in the season. Yet still only one of the six matches was live, England versus Scotland.

There were no FA Cup matches live on tv, until the Final when both broadcasters gave up the whole day to coverage. No wonder those in their fifties and sixties look back on the FA Cup Final from the seventies and eighties with fondness as we finally had our sport get the concentrated coverage we felt it deserved.

You also need to remember there was no football on a Sunday in England. The first fixture played on a Sunday in the First Division (now Premier League) was on 27th January 1974 when Stoke City beat Chelsea, 1-0. The next fixture played on a Sunday wasn’t until 6th February 1983 when Swansea lost 1-3 at home to Watford. 1983, the season after this World Cup, was when FA Cup had matches on a Sunday. Everton and Liverpool were both drawn at home in the Fourth Round so Everton moved their tie to the Sunday. In the following round, both teams were drawn at home again and this time it was Liverpool’s turn to switch their date as Tottenham, Everton’s opponents, would not budge.

With just three channels the broadcasters were trying to juggle so many people with differing interests. BBC was especially concerned not to alienate too many viewers. Both broadcasters showed the FA Cup Final but would share the honours during this tournament. BBC had an especially tough time as Wimbledon, Royal Ascot and Test Match cricket going on at the same time.

ITV was given the opening game and opening ceremony but astonishingly refused to show either, fearing a backlash due to the ongoing Falklands War. Of course the irony was the watching public would’ve taken great joy with seeing Argentina humbled by Belgium.

ITV showed the next match in the following afternoon when Italy and Poland played out a boring goalless draw, although there were fears of this match not being played as there was a dispute over who should pay for additional power supplies at the recently refurbished ground. BBC1 showed the evening game between Brazil and USSR, although this was interrupted by a news report confirming the Argentine surrender in the South Atlantic.

On the third day of the tournament neither broadcaster bothered with the afternoon game, Peru v Cameroon and this proved a smart move with another goalless draw. ITV had the evening game between Scotland and New Zealand with BBC not bothering with Hungary’s demolition of El Salvador which kicked off at the same time. BBC1 had England’s opening game live against France with the corresponding game between Algeria and West Germany only receiving a place in the highlights packages. Of the three games available on the first Thursday just one was live, Northern Ireland’s opening fixture against Yugoslavia, so neither of the afternoon matches were shown.

The first Saturday might’ve presented an opportunity for wall-to-wall football but both channels coveted their evening audiences so neither evening games were shown but ITV had shown the afternoon game, yet another goalless draw from Group One.

England’s second match, against Czechoslovakia, was live on ITV on the Sunday but yet again there was no evening coverage, which was a shame as the Spain v Yugoslavia was a decent match. Interestingly enough, Yugoslavia had been played the Swedish anthem for their first game against the Irish, and now this time they had to listen to the Danish anthem!

And that’s largely how things continued. Football viewers had to just be thankful for the coverage we got. We were used to only getting to see highlights packages. The lack of weekend live broadcast was particularly disappointing as the previous summer England had played two matches on successive Saturday evenings in Switzerland and Hungary and both were live.

By the time we hit the second weekend of the tournament the First Phase matches were all completed, so once again we had to feed off highlights and roundup programmes.

The Second Phase caused fewer problems for either broadcaster as there were just two matches, one in the afternoon, one in the evening, so they alternated coverage with every match shown live. From then on the only game which wasn’t live was the Third Place Play-off where Poland beat France to finish third for the second tournament out of the last three.

The Final was broadcast on both channels and so we were back to the conundrum of FA Cup Final day. The Beeb or ITV? Often it would depend on the pundit panel assembled, or for some they would choose what to watch based on who was commentating.

The pundit panel was now an established part of World Cup coverage, having been brought in as an idea by Jimmy Hill for the 1970 World Cup in Mexico. That competition was different as it was the first tournament to be broadcast in colour. European TV managed to get FIFA to change the kick-off times to suit their audiences rather than the locals. What worked as far as television was concerned was the slight tension and chemistry between the guests. Jimmy had selected Derek Dougan, Malcolm Allison, Pat Crerand and Bob McNab, all of whom were very certain of their own opinion and equally confident of how right they were all the time.

In essence football in this country was largely a male preserve with the authorities still mistrusting of television. The view still pervaded “if you show football live on television then no one will turn up at the grounds to watch it”.

Unfortunately football had to learn the hard way what was keeping people from grounds was the violence and lack of facilities for the supporter, television hadn’t quite understood its own potential for drawing in the viewers. If you watch coverage of eighties matches now shown and the score is shown in the top left hand corner of the screen, that has been added since. You had to wait for the commentator telling you the score or when a goal was scored a graphic would appear on screen also letting you know how far through a game you were. Now television has realised a viewer wants to be informed so when they turn on a programme and they’ve missed the start they should immediately be informed of the state of the game, the score and how much time they’ve missed.

The advent of more channels has revolutionised the way we consume football on television now and it is easy to see how we can become quite ambivalent to it all. It is a far better product than the one we were served up back in 1982, with far more cameras, better quality pictures although the punditry probably hasn’t improved.