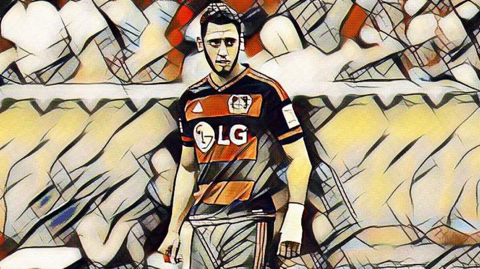 As you may have heard, AC Milan have been busy this summer. Five new arrivals have been already confirmed in Andre Silva, Mateo Musacchio, Franck Kessie, Ricardo Rodriquez and Fabio Borini. All players which have excited fans as the red and black revolution is in full-flow. However, Milan’s sixth new arrival, confirmed yesterday, is perhaps the most interesting. Step forward, Hakan Calhanoglu. The Turkish attacking midfielder became popular a couple of years ago due to his pinpoint accurate free kicks, becoming Bayer Leverkusen’s set-piece specialist. However, there is much more to the new recruit, from FIFA bans to being held at gunpoint, Calhanoglu’s journey to Milan has been bumpy.

Born originally in Germany, Hakan Calhanoglu chose to represent Turkey through his parent’s origins, from U-16 level to senior team, making 26 appearances to date. He explained that to represent Turkey instead would be an honour, and wants to be the Turkish Mesut Ozil, who coincidentally also has strong Turkish roots.

Like Ozil, 23-year-old Calhanoglu is an attacking midfielder by trade, capable of playing out wide with exceptional skill in set-piece situations. Starting off at Karlsruher, then Hamburg, Calhanoglu then encountered his first piece of controversy when making his €14.5 million move to Bayer Leverkusen in 2013. Calhanoglu took sick leave from Hamburg before the transfer, prompting anger from fans.

Three seasons in Leverkusen followed, scoring 17 goals in 79 games as he was deployed either left wing, right wing, centre forward or most notably, number ten. He became one of the club’s star players, scoring important and often spectacular goals, leading to being nominated Bundesliga’s Golden Boy in 2014.

A regular starting place in Turkey’s national team followed, and with it came more controversy. In October 2013, Calhanoglu and fellow Turkey and Leverkusen defender Omer Toprak were both held at gunpoint by teammate Gokhan Tore and a friend. The reason was believed to be Toprak’s friend dating an ex-girlfriend of Tore’s. The fallout of the incident was the trio not playing together in the national team, partly through injury and coincidence, and part due to team selection. The trio settled their differences in 2015.

Back on the pitch, Calhanoglu was making a name for himself through his spectacular free-kicks. Strikes at club and international level led to him scoring the most free-kicks in Europe’s top five leagues from 2013 to 2015. Calhanoglu scored 11 free-kicks from 82 shots, with a conversion rate of 13.4%. This dwarfed Messi and Ronaldo’s conversion rates – the latter who Calhanoglu claims to model his free-kick style on. A particular effort which gained popularity on the internet was his 50-yard effort in a 3-0 win over Borussia Dortmund when he was still at Hamburg.

A few quiet years had passed and so Calhanoglu soon found himself in another controversy. In January 2016, he was banned for four months by FIFA due to a situation regarding a broken down move between Karlsruher and Trabzonspor in 2011. Trabzonspor paid Calhanoglu €100,000 for signing a contract with the club, however, talks broke down and he stayed at Karlsruher after the payment had been made. The player has denied any blame for the event, however, was still charged €100,000 and the ban remained.

Now free to play again, Calhanoglu has moved away completely from German football and joined a new-look Milan for around a reported €20 million. Under Vincenzo Montella’s wing, the Rossoneri will be aiming to regain their Champions League place next season.