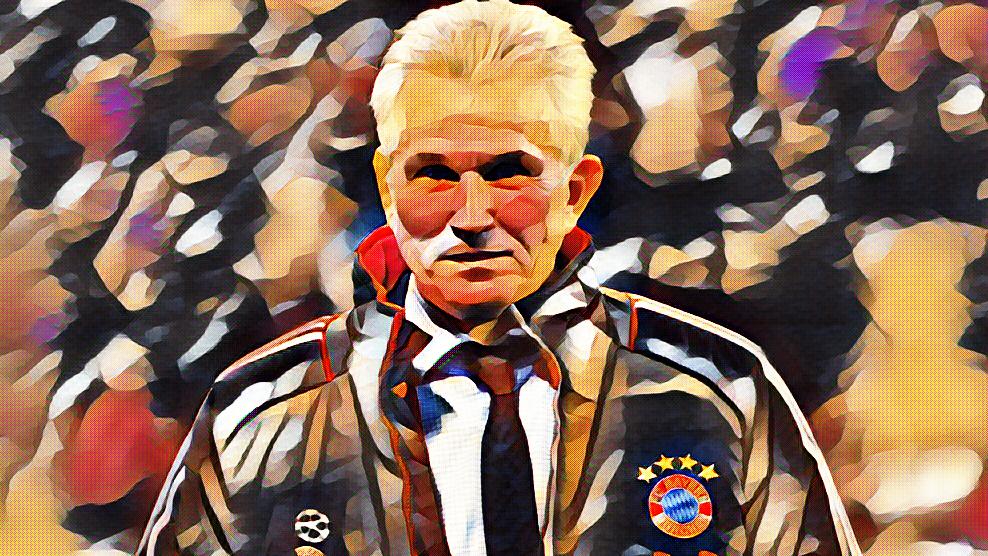 After the recent departure of Carlo Ancelotti, Bayern Munich have appointed Jupp Heynckes for his
fourth spell as manager at the club. He first took the reins in 1987, then again as caretaker in 2009
before his last stint from 2011 to 2013, the last season of which he led Bayern to the first treble in
their history, winning the Bundesliga, DFB Pokal and the Champions League. The season before however was the agony before the ecstasy.

It was 19th of May 2012, the Champions League final at Bayern’s home ground, the Allianz Arena.
Bayern were up against a Chelsea side who had scraped their way there, doggedly defending against
Barcelona in the semis and here in the final. The “home” side took the lead through Thomas Muller
in the 81st minute, finally breaking down the resilient Chelsea rear guard, only for Didier Drogba to
once again be Chelsea’s saviour, thumping a header past Manuel Neuer. The game advanced to
extra time, in which Petr Cech saved an almost certain winning penalty from Arjen Robben, then on
to penalties. In goal for Chelsea, Cech seemed telepathic – guessing the right way for each penalty,
denying Ivica Olic and Bastian Schweinsteiger. Didier Drogba was left with the deciding say, duly
slotting away to send the Chelsea fans and dugout into delirium, and plunging Bayern into despair.

This was the second time in three seasons Bayern had reached the final of the competition, and the
second time they had lost. Couple that with losing the Bundesliga to Borussia Dortmund for a second
year running, the Bavarians were at a low ebb. In the summer of 2012 they went to work in the
transfer market, determined to get back to winning ways. Several players were brought in,
including centre-back Dante from Borussia Monchengladbach, Mario Mandzukic from Wolfsburg and
record Bundesliga signing Javi Martinez from Athletic Bilbao. They meant business.

Heynckes’ side typically lined up in a 4-2-3-1 formation; Manuel Neuer in between the sticks; Phillip
Lahm and David Alaba as full backs with Dante and Jerome Boateng in the centre; Javi Martinez and
Bastian Schweinsteiger in the engine room. Mario Mandzukic started up top but the three players
behind him changed as the season progressed. Initially Heynckes preferred to start with Muller on
the right, Ribery on the left and Toni Kross in the number 10 role. However in the latter stages of the
season Arjen Robben started on the right, shifting Muller into the centre and leaving Ribery out left.

Bayern have gained the moniker “FC Hollywood” from some opposition fans in Germany, due to a
reputation for having a dressing room full of divas and prima donnas. The same could not be said of
this team, however. Each player was supremely talented and a hard worker, making for a formidable
side, industrious in defence and devastating on the counter, with goals coming from all over the
team.

Bayern began the season by winning some silverware in the shape of the DFB Supercup, beating
Borussia Dortmund 2-1, Mario Mandzukic scoring on his competitive debut. They then went on to
begin their Bundesliga campaign in blistering form, winning their first eight matches, scoring 26 goals
and conceding just two. The next match they suffered their only loss of the campaign, 2-1 at home
to Bayer Leverkusen.

In the Champions League, they were drawn in a group with Lille, BATE Borisov and Valencia. They
won their first match at home to Valencia 2-1, but then suffered a shock 3-1 defeat away to BATE
Borisov, who were expected to be propping up the group table. Bayern ended the group stage with
13 points, level with Valencia, only finishing top by virtue of one goal. Domestically, they ended the
calendar year top of the Bundesliga and had advanced to the quarter finals of the DFB Pokal.

Bayern Munich have long been the dominant force in German football, and are not used to losing.
They’ve won the top division 27 times, 18 times more than their nearest challenger, FC Nurnberg.
Not since the 90s had Bayern gone without winning the Bundesliga two seasons in a row, until
Jurgen Klopp’s Borussia Dortmund in 2011 and 2012. There was talk of a power shift, could
Dortmund be the new dominant force in Germany? They had an exciting young side with an exciting
young manager, in contrast to Bayern, who had an ageing coach in Heynckes, and players like Lahm,
Schweinsteiger and Ribery who some accused of being over the hill. They began the 12/13 season
with a point to prove.

One player who was instrumental in the campaign was homegrown Thomas Muller. To many, Muller
remains a confusing player – he’s obviously good, he scores lots of goals, important ones, and is
integral for both club and country, but what is he actually good at? Muller describes his role as a
“Raumdeuter” (Football Manager geeks will be familiar), translated as “interpreter of space”,
someone who can find gaps in the opposition defence. He is a big game player, Germany boss
Joachim Low described him as being “impervious to pressure”. He would finish the season as top
scorer, 23 goals in all competitions, several goals coming at vital points in Bayern’s campaign.

If the Bavarians had looked dominant before the turn of the year, they were utterly imperious
afterwards. Following the winter break, they went on a fourteen-game winning run, wrapping up the
title in record time on the 6th of April. They dropped just two points, a draw away to Dortmund,
picking up 49 points out of a possible 51. Any doubts over who Germany’s dominant footballing
force was had evaporated.

Bayern won the DFB Pokal in their last match of the season, a 3-2 win against Stuttgart, having
dispatched Borussia Dortmund and Wolfsburg en route to the final. Thanks to a Muller penalty and a
brace from Mario Gomez, they went 3-0 up, finishing the game slightly nervy after conceding two
late goals.

In the Champions League round of 16 they drew Arsenal, advancing in what proved to be a tense tie.
The contest looked all but over after Bayern won the first leg 3-1 in London, the away goals rule
meaning Arsenal needed to win 3-0 in Munich to advance. Arsenal took an early 1-0 lead through
Olivier Giroud, and then added another five minutes from time through Laurent Koscielny, making
for a tense end to the game for the home side, who eventually progressed through away goals. The
quarterfinals brought Juventus, who Bayern saw off in a much more professional fashion, beating
them 2-0 home and away to set up a semi-final tie with Barcelona.

Going into the first leg in Munich, everyone was anticipating a close encounter. Barca had been
Europe’s premier side for a few years, but Bayern were looking unstoppable. There were doubts
about the Germans however, they had missed a golden opportunity the win the contest the year
before, were they gaining a reputation of being chokers? Over the next ninety minutes Bayern
dispelled any notions of that, thrashing the Catalan side 4-0 thanks to a double from Muller, and
goals from Gomez and Robben. It was a completely dominant performance, Barca were left shell
shocked. They looked towards the second leg at the Nou Camp, if any team could surmount such an
unassailable lead it was Barcelona and Lionel Messi. Bayern had different plans. Showcasing their
teamwork and industry, they not only kept out Barca but went on to beat them 3-0, inflicting upon
them their heaviest ever aggregate defeat in Europe.

One stand out performer from the semi-finals was Arjen Robben. Robben began the season
downtrodden – a miserable Euro 2012 with Holland, missing the chance to win the Champions
League for Bayern at their own ground, and relegated to the bench. He made sporadic appearances
through the campaign, until Toni Kroos picked up an injury against Juventus, Heynckes making the
decision to move Muller centrally and bring Robben back into the fold. He repaid the managers faith
in him in the semi-final against Barca, not only scoring in both legs, but showing his newfound work
ethic – tracking back, doing the defensive work, before terrorising the Barca defence on the counter
attack. Alongside Franck Ribery on the other flank, it’s difficult to think of a better pair of wingers in
Europe in the last twenty years.

Onto the final at Wembley, where Bayern were pitted against Borussia Dortmund. It was a fitting
finale, the chance to exorcise two demons – to beat their domestic rival, and to finally win the
trophy that had so cruelly eluded them 12 months earlier. Both teams missed a number of chances
before Mario Mandzukic opened the scoring for Bayern on the hour mark, poking home after being
set up by Robben. Dortmund equalised just eight minutes later, Ilkay Gundogan slotting home the
penalty after Dante was penalised for a high boot on Marco Reus.

The match looked to be heading for extra time when, in the 89th minute, Robben had his
redemption. Mandzukic lost the ball on the edge of the Dortmund penalty area to Nevan Subotic,
who before he could turn was caught by Robben, who took the ball past the defence, poking the ball under Weidenfeller, rolling home to send the red end of Wembley into raptures. Robben looked like he could scarcely believe it, springing towards the adoring Bayern fans, mouth agape, before he was engulfed by teammates. In that moment Robben had secured his own redemption as well as Bayern’s – they didn’t choke and nor did he, sealing a fifth European cup for the German side.

Heynckes “retired” at season end to make way for Pep Guardiola, who set records domestically with a fantastic free-flowing team, but was perhaps harshly judged due to the high standards set by his predecessor. With both Guardiola and Ancelotti falling short in Europe, Bayern fans will be hoping the return of Heynckes spells better fortune.