Skip to content
1 Comment on Hope Powell for the PremiershipPosted in Premier League, Rants By By Far The Greatest TeamPosted on August 3, 2012June 30, 2017Tagged Hope Powell 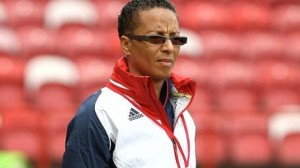 It might sound like a facile question but it matters. In Britain, a top-level football manager is likely to be a white, middle-aged man. He is extremely likely to have been a former football player. In the higher-levels of the game being Scottish helps disproportionately as does a certain mix of charisma, ego and charm.

Yet there is no reason as to why a football manager at a Premier League team must be a former footballer as Andre Villas-Boas proves (Villas-Boas is also young – younger than some of the players he manages). Arrigo Sacchi should have knocked the argument about being a former player out of the park but it hasn’t. We still hear rubbish from the golf-club of ex-pros that you ”have to know the game, know the dressing room” to succeed. An outsider won’t know the game, won’t be able to control the dressing room, won’t be respected or understand ”the banter” and nature of the dressing room.

Football doesn’t like the idea the idea of outsiders infiltrating the game. It is deeply conservative game in many ways. Consider how many in the game wanted Villas-Boas to fail at Chelsea yet are the same voices endlessly promoting people who have achieved little in previous roles Alan Curbishley or Steve Bruce for jobs. Consider the downright hatred from many media sources, particularly ex-pros, of innovations such as sabermetrics. Consider Owen Coyle’s ”Zonal Whoever” comments.

We know that football is generally poor in its recruitment (hence why clubs who master the market can excel on the pitch and financially). We know that Brazilian and Dutch footballers tend to be overvalued in the marketplace. We know that blonde players are overscouted. We know that clubs tend to scout in traditional areas – away from middle-class areas, private schools and areas with large Asian populations. Why do we expect management selection be any different? As Simon Kuper put it ”as there isn’t much he can actually do, the key thing is to look the part”

It is very difficult to evaluate whether a manager is doing a good job and I think most clubs are not as good as they could be in managerial selection. It is especially difficult for fans to evaluate their ability.

Most managerial decisions, and much of a manager’s work, happens away from public viewing and behind closed doors. Moreover, the outcome of his decisions often happen months – or even years – down the line. A manager who signs a specific player; tinkers with the training systems; tinkers with the youth set-up; or brings in new coaches may not last long enough to see the outcome of their work. The next manager may come in and take the credit.

All this adds up. Clubs appoint a manager who excels somewhere and then flops almost instantly. Therefore it makes sense for clubs to pick managers who fans, sponsors and the media expect to be managers.

Introducing a new kind of manager…

With all that in mind. Imagine a manager who has played for England 65 times for England and scored 35 goals. Imagine a player who has managed England for 13 years (including guiding them to the final of European Championships), who holds a UEFA Pro Licence and who has just guided a team through the first stage of the Olympic Football Tournament with three wins and no goals conceded. Imagine a charming, clever and genuine coach.

Now imagine that she is a black, female, Lesbian.

It is my view that Hope Powell is talented enough to manage in the men’s game. She has the knowledge, has the skills and has the ability to manage an elite bunch of players. Think of the male managers who get appointed failure after failure. Why are they trusted? Why isn’t a woman given a chance?

Partly it will be football’s inherent conservatism. People will believe that a woman can’t manage a group of men, that they won’t respect her, that she won’t understand ”the banter”. This, beautifully, is essentially non-testable. Moreover, plenty of male managers lose the respect of their players or cannot control the dressing room.

Partly it will be down to football’s innate sexism (remember the Masse affair – when there was outrage over a decision Sian Massey got right). Massey was criticised when she got things right, one cannot imagine how a feral fandom and rabid press would deal with a female manager who lost a series of games.

Partly though it is because football is poor at recruitment of managers and, therefore, clubs need to appease and please fans by picking players who look like managers. No club wants to draw huge media attention to itself by being the first team to pick a female manager – the scrutiny on her would be enormous. Every selection under the microscope, every word and every actions scrutinised. Powell could do it but I doubt she will get the chance.

When we blame ”football” for its ills we are really blaming everyone involved. The reason Hope Powell won’t become a manager of a men’s team isn’t because she cannot do it (because she can). It is because to the overwhelming majority of fans disappointingly want managers to look more like Steve Bruce rather than Hope Powell – regardless of which one has more talent, ability and knowledge.

They know where they are with Bruce or Curbs. He’ll get on well with the boys and get sacked in 18 months time. They wouldn’t know how to deal with Powell. That is a shame for us all.