It appeared for a long while that it was done. Manchester City had sewn it up, or, at least, they thought they had. So had everyone else. Manchester United fans, slumped on their seats, looked aimlessly in the distance. Others were down on the concourse thinking but not talking. Whilst in the home sections of the Etihad crowd there were jubilant scenes. The plastic flags that had been given to supporters littered the floor. Shouts of “championees” could be heard from within the bowels of the stadium as half-time cups of tea were drunk.

What followed was extraordinary. United scored, quickly added another and then one more to complete a remarkable act of escapology against the Premier League champions-elect. From 2-0 down to 3-2 up in the space of 16 second half minutes. The match had spun out of control and at the final whistle the shouts of euphoria had given way to tears in some cases, and they were not those of celebration. 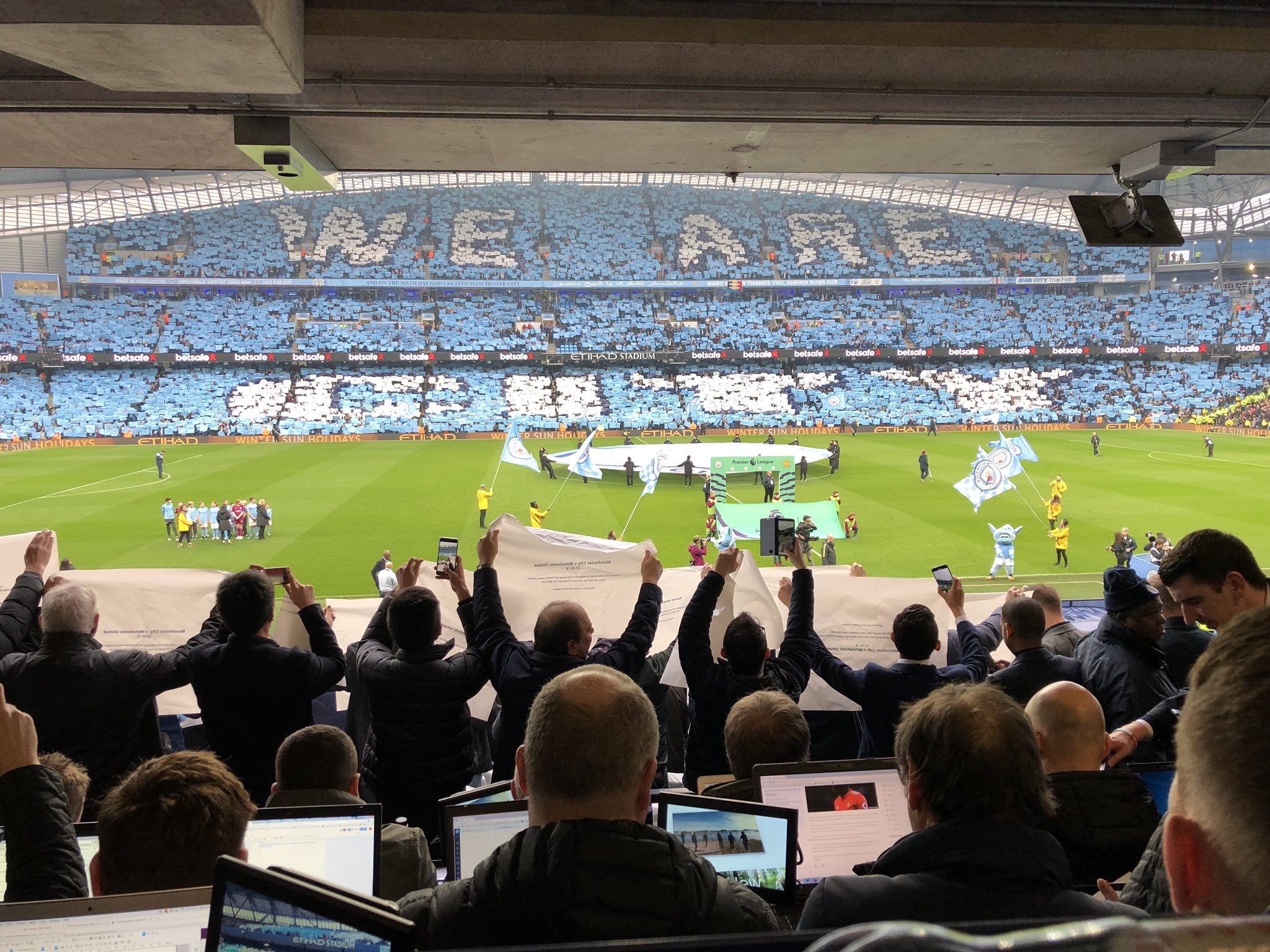 It was a derby match that will not affect the destiny of the title – at least not this season – but as a standalone game of football it was wild, eccentric and a joy to watch. United are famed for remarkable comebacks but somehow this seemed even the more astonishing. In the opening period, United were – to put it bluntly – abysmal. The match was apparently being broadcast into one billion homes around the world and it was quite embarrassing to see the champion’s closest rivals being humiliated in such a manner.

The United fans’ gloominess at half-time was tampered by the fact that it could have been so much worse. Vincent Kompany and Ilkay Gundogan had both scored for City and it could easily have become a rout of five or six if Raheem Sterling had not been having a forlorn day in front of goal. Sterling’s misses did not feel so consequential at the time, with City winning 2-0, but they did by the end.

United certainly rode their luck bearing in mind the two incidents when penalties should have been awarded against Ashley Young – the second one, at 3-2, a studs-up lunge at substitute Sergio Aguero that should also have resulted in a red card – but it was a triumph, ultimately, for the strength of personality within Jose Mourinho’s team. A difficult week for City got that bit more challenging – this is the first time in Pep Guardiola’s coaching career that one of his teams have conceded three goals in successive matches and Nicolas Otamendi, in particular, was badly exposed during the period of the game when Paul Pogba scored twice and Chris Smalling turned in the winner.

During the first half, Pogba was part of a midfield that was being over-run and part of a team with 10 men, as Alexis Sanchez hadn’t bothered to come out for the opening period. Yet the match turned and spun into a frenzy five minutes into the second half, when Gundogan’s shot flicked off the angle of crossbar and post. After that, United’s stars seemed to remember where they were and the occasion they were playing in – probably with some help from Mourinho. The difference in Pogba’s and Sanchez’s performances was stark.

Guardiola must have been shocked to see his City side unravel once more when a touch of pressure was applied. Sanchez – who was involved in all three of United’s goals – drew Otamendi out to the right wing and then swivelled away from him to help create Pogba’s first goal. Ander Herrera chested Sanchez’s cross into Pogba’s path and once the Frenchman had aimed his shot beyond Ederson it was remarkable how easily City had been rumbled.

Two minutes later, Sanchez crossed from the left and Pogba eluded Otamendi once again to equalise with a precise header. Smalling’s goal was another cross into the penalty area, this time from Sanchez’s free-kick, and the centre-half was completely alone as he side-footed his shot into the net.

City’s vulnerabilities at the back can often be overlooked when they attack so beautifully but it is worth noting that Guardiola’s side have not actually kept clean sheets in successive home matches since September. Yet the last two games have shown how susceptible they can be against top-level opposition and this was one occasion when Mourinho could never be accused of ultra-defensive tactics.

Once the ground had emptied and the roller-coaster of emotions for all had been played out, Guardiola sat in his press conference unable to offer any explanation of why and where it went wrong. His team selection clearly had an eye on Tuesday’s Champions League tussle with Liverpool – Kevin De Bruyne was on the bench, Gabriel Jesus and Kyle Walker were also rested, whilst any temptation to fast-track the fit-again Aguero into the starting lineup were resisted.

However, at the time it was irrelevant. The players in sky blue on the pitch were ripping United apart; creating chances, albeit only scoring a few, it appeared to be a decision that suited all. Kompany had leapt high to power in Sane’s corner and five minutes later Gundogan swivelled superbly past Nemanja Matic to stab in City’s second and put a fittingly glossy finish to a lovely team move.

At 2-0, the mood was euphoric. This fixture had long been touted as the one; TV broadcasters drooled at the prospect of this derby having such consequence. City were on course to win the league with six games to spare. The guard of honour had already begun; United’s defence seemingly uttering “after you sir”. BBC 5live’s Alan Green had already started his match report at half time, but minutes later it was in a bin somewhere on the Etihad concourse. Little did he or any of us know what was to come our way.

The Premier League crown will still be placed on City’s head, but it won’t take place for another couple of weeks at least. For so long, it had seemed done and dusted there and then, but the exhilarating high had turned into an excruciating low – and vice versa for those of a United persuasion. It was always destined to be an occasion that people would remember as an ‘I was there’ but few could have anticipated the 90 minutes of football that was played out. It will certainly be remembered as an ‘I was there’ moment but not for the reason that was expected.