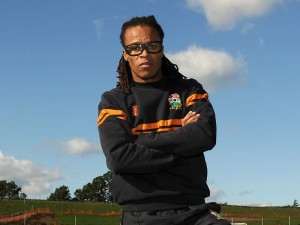 Sitting at the bottom of League Two with the probability of staying in the Football League seemingly decreasing after every game there was very little for supporters of Barnet to be cheerful for around about a week ago, that was until a well known Dutchman in the form of Edgar Davids was to join their ranks as a player/head coach. Davids having spent time in Europe’s elite leagues with Juventus, Ajax, Barcelona and Tottenham Hotspur during an illustrious career will bring a sizeable knowledge of the game as a whole to Underhill and whilst his initial aims are to aid Barnet in their fight to stay in the Football League there may well be a cause to believe that the Dutchman might just make a difference to English Football as we know it.

Edgar Davids has made no secret of the fact he grew up playing street football which he often attributes as the catalyst for his impressive close control and ability to find space on a full sized football pitch which would go onto to helping him become one of the most widely recognized midfielders of his generation. Davids has spent a lot of his time post Crystal Palace trying to set up street football arenas around the globe in particular in Vietnam. Davids earlier this month before becoming a member of the Barnet staff said “coaches need good players, and what I and the street football community are trying to do is to help to create more good players. We go back to the roots of football, and foster a game in which players work a lot on the ball”

It has long been recognized that in terms of technical ability, English football has fallen behind a lot of other footballing nations in recent years. This is illustrated perfectly in international tournaments where England have been outclassed by technically superior teams such as Germany and as recently as this past summer Italy. Whilst Barnet at the moment is simply the starting point there could well be a revolution on the cards should Edgar Davids be able to work in an environment that he controls. With the Suriname born Davids being appointed as Assistant Head Coach at Barnet it is quite likely he will take charge of most of the League Two sides training sessions, these training sessions will be completely different to what has gone before at Underhill with Davids focusing on close control and the ability to find space, his knowledge of street football and his strong belief in the concept of street football itself will without doubt be used in training.

It is a simple fact, if on the five or six a side pitch you develop the ability to find space for yourself in such a tight area then it will be of great benefit to you when you move onto the full size pitch as you will find it even easier to find space for yourself and then bring teammates into play, this is why Spain, Brazil, the Netherlands and to a slightly lesser extent others like Russia, Poland and Ukraine are so fantastic in terms of technical ability when their young players reach senior level. Their young players when they leave academies will have far greater close control, first touch and spatial awareness than that of their English counterparts of the same age and this is something that has to change in order for England to be successful in the future.

You would think that Edgar Davids with the reputation he has built up over his career could walk into any Chinese or Qatari side at this current time and pick up a large pay packet however it seems that he is motivated to achieve much more than that, he is realistic he understands that his playing career is nearing its end, he said as much when he joined Crystal Palace in August 2010 “I might last two games, I might stay here for two years, I don’t know”

The Pitbull as he is so affectionately known in Turin wants to be part of something far greater than a cameo season in China or Qatar. Since he left Crystal Palace Davids has been coaching at amateur level with Brixton United in the hope of replicating Marco van Basten’s rise to the top of the coaching hierarchy from amateur level and he has been successful having won two cups with the side, this illustrates that Davids’ philosophy of technical football can work in England and whilst amateur level is a world apart from the professional stage the basics are the same.

If you can get a team in League Two playing good football with a high level of technical ability then you have every chance of being successful just take a look at Swindon Town last season under Paulo Di Canio, whilst they have had considerable financial aid in that time there is still a philosophy of the Italian that has been followed to the letter and has seen them not only promoted to League One but also being one of the standout teams in the third tier of English football.

Davids having overseen last weekend’s heavy defeat to Plymouth Argyle made his first real mark on the club this past Friday evening when he made his playing debut for Barnet wearing the Captain’s armband against Northampton Town. After a week of training with the squad and coaching the players it appeared that there had been a change in mentality at Underhill with the Bees after having taken just three points from their opening twelve games convincingly beating Northampton 4-0. Davids said after the match “I’m proud of them because the tactical things we worked on all week they executed them”

Davids if he can continue motivating the Barnet players and improving them technically then there is hope for the Bees’ Football League status and should Davids and Mark Robson keep Barnet in the Football League then there is every possibility that the former Ajax man could really make his mark and get a chance to work with the younger players at the club and then should that prove to be a success then who knows where Davids could move to in the future.

Whilst it seems so insignificant and miniscule in the grand scheme of things at this moment the appointment of Edgar Davids whilst indeed it is a risk, is an appointment that signals a change in philosophy of some of England’s less travelled teams. Gone are the days of the stereotype “if you’re in League two, then you have an awful pitch and you just play it long” there are many more coaches at that level trying to incorporate technical, attacking football into their sides makeup and this for English football can be no bad thing.

Should Davids as I expect him to do succeeds at Barnet then there may well be a place closer to the English national team for him in the future. The playing style of the English national team is something that troubles Davids “When I look at the English team and I see them play, I’m not a great fan. I know they have talent but it’s not developing right now. It needs a lot of work.” Davids being given the chance to work with England’s best young players in the future would be certainly a positive step with the Dutchman without doubt being strong enough in character to stick to his principles and keep utilising his street football coaching methods and it may be this that the England players of the future need more than anything.

Despite it still being early days at Barnet the potential for success and development is there with Edgar Davids as part of the staff and the English FA should really look at Davids and take note of his progress with Barnet as he may well be the man to take the mantle from Sir Trevor Brooking and Gareth Southgate and succeed where they appear not to have done, in revolutionising the training and coaching given to young players in order for them to stand a chance of matching up against the likes of Spain, Brazil and the Netherlands in the future and it is this possibility that gives me every confidence that the appointment of Edgar Davids at Barnet could be the first step towards a great change in English football.