Skip to content
Posted in Premier League By By Far The Greatest TeamPosted on March 11, 2013March 11, 2013Tagged QPR, Sunderland 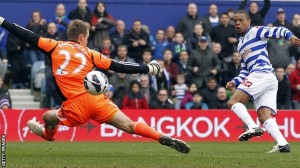 Bob Chapman once again fills Pete Sixsmith’s outsized shoes to  report on a game the master chose to miss. It started as a day when Bob  and a friend would impress two young Aussie women with a scintillating  show by Sunderland preceded by the delights of a west London gastro-pub. Something went wrong; they endured takeaway KFCs in a foodless boozer  near the Bush and the poor Aussies may never set foot in another  football ground. Meanwhile, Bob was left feeling there’s something  damaging to the health in watching SAFC at this stage of a season …

Pete Sixsmith contacted me last week, to ask whether I could fill in for him at QPR, whilst he went and communed with the  gentry down at Ascot, supporting Shildon in the FA Vase.

Naturally I replied that this posed no problem. However, it does  become a real problem for me when Sunderland play so poorly and lose.  What can you say? As a teacher I write numerous reports all of which  usually have to have a positive slant.

All the same, I will try my best even though my fellow supporters at  Loftus Road suggested I should just send in “rubbish, could well go  down” and leave it at that.

It’s getting to that time of year when my mind is totally preoccupied  with football. Being a Sunderland supporter it’s always the same. Oh for the life when I could just go and watch a match without there being  some underlying threat. I’m sure it does you no good in the long run.

I was greeted by some unusual faces when I arrived at Bedford station.

Kevin Spencer had brought along two female Australian gap year  colleagues for the experience. Being Aussies they preferred Rugby Union  but were quite willing to give “soccer” a go. They told me they went  down to London most weekends.

Choice of pre-match pub was my brother Tim’s. He selected the  Coningham Arms on Uxbridge Road, a traditional boozer only 10 minutes  from Loftus Road. To come through the door at midday to find it  virtually deserted, apart from a man with a strange haircut standing at  the bar seemed bizarre and a little unsettling. Closer, rather  intermittent examination of this haircut revealed a blue and white close crop with a QPR razor cut into it. Was this a sensible choice?

Anyway he turned out to be a really friendly chap and it soon became  clear we had similar opinions. He, like me, couldn’t understand why we  were in such a desperate situation with the squad we have. The beer was  OK but definitely no food was on offer. Food came from the local KFC two doors along. The two rather charming pint-sized landladies didn’t seem  to mind, although our Australian friends certainly seemed bemused.

I like days out in London, but resent having to pay exorbitant ticket prices for matches. The fact that 91 p[er cent of QPR’s income is spent on players’ wages suggests they will have problems should they go down. I dislike clubs like that, although to their credit they do produce a  quality programme.

In an article headed “The numbers game”, Sunderland apparently per game  have 11 shots against an average of 17.  Our average possession is only  44 per cent and we complete one through pass per game. I think this last point is at the crux of our problems, in that we currently don’t have  an adequate midfield.

Unlike other recent matches I felt we deserved nothing from this  game. We only showed one glimpse of quality in the whole 90 minutes. A  Sessegnon break down the right allowed him to get to the bye line and  deliver a quality cross to Johnson at the back post. His drive in was  converted by Fletcher for the opening goal. Once they equalised, rather  fortunately following a deflection off O’Shea, there was only going to  be one winner.

Although we are now playing with Graham and Fletcher up front we seem unable to get up and support them with any conviction. Sessegnon and  Johnston are always double marked when they are on the ball, so we need  to use an alternative strategy. Sadly we don’t seem to have one. Tricky  wingers are always double marked and I couldn’t understand why we didn’t do it yesterday as Colback and Gardner were continually exposed.

We are definitely a much better side when Cattermole is playing. He  drives the team on from the midfield and I feel this is the area that is causing most concern.

If Cattermole had been fit for the season then we wouldn’t be in this mess. Danny Graham had a season in the Premier League with Swansea and  then got found out by defenders. If you do not have pace then ultimately you will struggle. Consequently he spent most of his time on the bench. I believe we have bought a Championship player and the sooner we recall Wickham the better.

Alternatively we should revert back to 4-5-1. You could never predict a  Roy Keane side and MON is the complete opposite. I think you need  something between the two and you don’t play players out of position.   Although we were beaten by two wonder strikes with which Mignolet had no chance, you have to question why those players were able to shoot from  outside the box.

So I am sorry it is not much of a report but I can’t honestly  remember seeing very much football and the resounding response at the  end of the match was justified.

Will we go down? I don’t think so, as I am sure we will pick up the  necessary points of which three against Norwich are essential.

Like Pete Sixsmith against Fulham, my loyalty points mean I have been offered a hospitality  package at the Stadium of Light for the game against Norwich. I have managed to persuade my wife of nearly 23 years to come along for her first match. Let’s hope it’s a win and the  first of many for her – unlike our Aussie friends who went straight home after the match. Was it the “soccer” or was it the Coningham Arms  experience. I may never know!