Skip to content
Posted in International By By Far The Greatest TeamPosted on June 13, 2013July 13, 2017Tagged Haiti, Spain 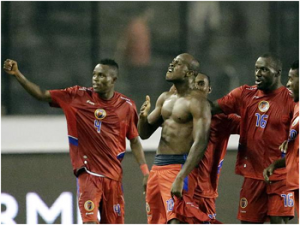 Who would have thought it? In a matter of a few days, the Haitian national football team has come away from two formidable friendlies against Spain and Italy with a narrow loss, historic draw and three goals.

And the most sturring thing of all is: despite the bookies were favouring their oppoents, they deserved it. At times, looking far superior than their illustrious opponents although they have not won many awards.

The recent friendlies are serving as warm-up matches for Haiti’s upcoming Gold Cup journey, which kicks off in early July. As well as being played for footballing reasons, the Italian tie carried extra significance as it was created to help raise money for the sufferers of the tragic 2010 Haitian earthquake.

Sunday’s encounter with Spain was seen as ideal for Vicent Del Bosque’s men. They have the small matter of the Confederations Cup to contend with which commences on the weekend. It was the perfect chance for Del Bosque to rotate his squad and, what he presumed, conduct a trouncing over minnows Haiti. However, it didn’t quite work out that way.

Spain were straight out the traps and, as you would expect, had the lion’s share of possession early on. They scored twice in the opening 20 minutes and it looked like it was going to be a rout. But plucky Haiti displayed great strength of character and admirable resolve to come back fighting and they reaped the rewards late on as Wildedonald Guerrier completed an exquisite solo goal.

Haiti were relentless in the second-half and their athleticism and enterprise stunned Spain. They negated the likes of Fernando Torres and Juan Mata ever so well and were unfortunate not to acquire at least a draw. As the goalscorer Guerrier – who celebrated the birth of his son Cristiano the day before the game – so fittingly said after the clash: “It was a great honour to play against the world champions and I think we showed that Haiti is not only about the earthquake we had, but we showed that we have talent.”

Antonio Israel Cantero’s troops headed into the friendly against Italy with great aplomb. Played at Brazilian club Vasco da Gama’s home stadium, in Rio de Janeiro, there was a large buoyant Haitian contingent there to support their team. It made for a lively and entertaining atmosphere, very much like in the 1974 World Cup meeting between the two when striker Manno Sanon scored *that* historic goal for Haiti. Italy went on to win 3-1.

This time around it was far more evenly contested, though. Again, Haiti conceded an early goal. In fact, it was ridiculously early as Italy netted after just 19 seconds. But, just like against Spain, the side didn’t give up and created a fair few chances. Italy went 2-0 up late on and then took their foot off the gas. Haiti seized the last 10 minutes and looked hungry for at least one goal. PSG winger Jean Eudes Maurice – on loan at Le Mans – was tripped inside the box with seven minutes to go and substitute Olrish Saurel nonchalantly stuck the ball into the bottom right corner.

The momentum had swung like a tree in gusty winds. Haiti were recycling the ball productively and with Italy on the back foot, substitute Jean-Philippe Peguero latched on to a long ball over the top and struck low to send the Haitian crowd into absolute delirium. Admittedly, even I was jumping for joy as my mouth gaped in absolute shock. In the space of seven minutes Haiti had turned the match completely on its head and Peguero’s goal will never be forgotten in Haiti’s football history even if it was a friendly.

Having watched the match live online, it was clear to see where Haiti’s strengths lie ahead of the Gold Cup. Jeff Louis was fabulous throughout on the left wing. Not afraid to run at his man, he was brave and direct. He had the speed to cause problems and he made life hard for Mattia De Sciglio. Léonel Saint-Preux, filling in for the injured Kevern Belfort, also put himself about and used the ball intelligently. The squad appears to being gelling wonderfully and there is a genuine sprit that permeates the team.

These two friendlies could be the making of Haiti. Results like the one against Italy don’t come around too often, if at all, and they must be savoured, treasured. These string of matches will do Cantero’s players the world of good as they prepare for their first Gold Cup appearance in four years. But, for now, Haiti as an island should and will cherish and venerate the draw against Italy for as long as possible. With Peguero, naturally, going down as a national hero.