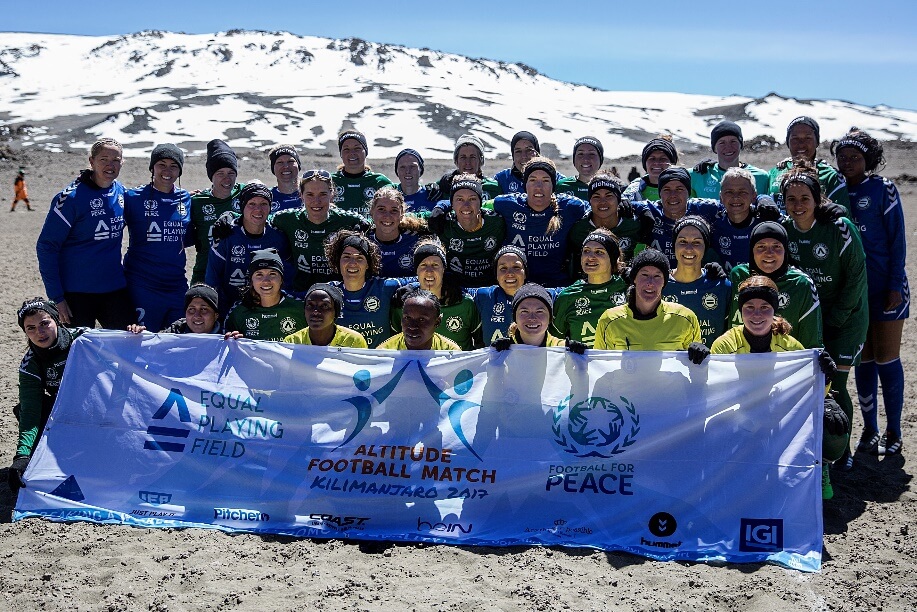 30 women from 6 continents taking part in the match

Equality in sport is always a big topic, so to try and raise awareness 30 women from 6 different continents came together on June 24th with what they believe to be a Guinness World Record idea… 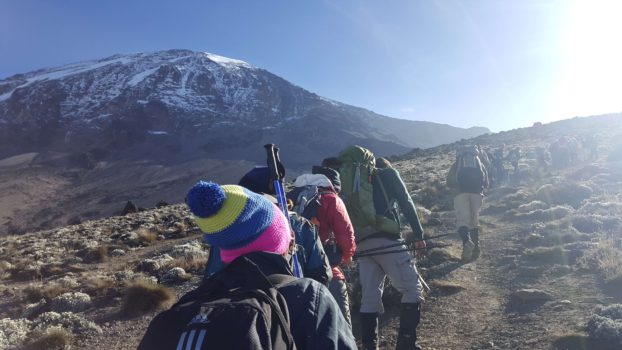 Most amateur footballers struggle to get out of bed on a Sunday morning to play a game of football in their local league, so climbing Kilimanjaro, the highest mountain in Africa, to play a match isn’t something that happens too often. Yet, last week it happened – at an altitude of 5.729 metres. And now the ball has been passed to the team at Guinness World Records to get this occasion recognised as the highest altitude FIFA approved match ever played.

Volunteer pro players from across the world

The players who volunteered to take part were a mix of professionals and amateurs aged between 15 and 55 from more than 20 different countries around the world. Players included two-time Olympic Gold medallist and World Cup winner Lori Lindsey from the US, and the retired France international Sandrine Dusang. The two teams, Volcano FC and Glacier FC played the record-breaking match in custom-designed football kits from hummel. The match was played in a crater just below the summit on a FIFA approved pitch with full-size goals and lines marked with flour. The two 11-player teams played a full 90-minute game at an altitude almost 2km higher than the highest stadium in the world. The game ended 0-0.

Erin Blankenship, co-founder of Equal Playing Field and player from team Glacier FC commented: “The world record was the original idea. Because it was the one thing you can’t challenge. You can’t challenge the fact that you’ve got a group of athletes playing at almost 19,000 ft, it doesn’t matter what gender they are. Building on that, what else do we want to do? What is the story we want to tell? Who and what are the players, organisations and challenges that surround equality in sport and women’s football in particular. This now gives us a platform to work from.”

Football for Peace Co-Founder and International footballer – Kashif Siddiqi, said “Sport can play a great role to challenge current mind-sets, create a positive impact and better opportunities for the next generation of women.” 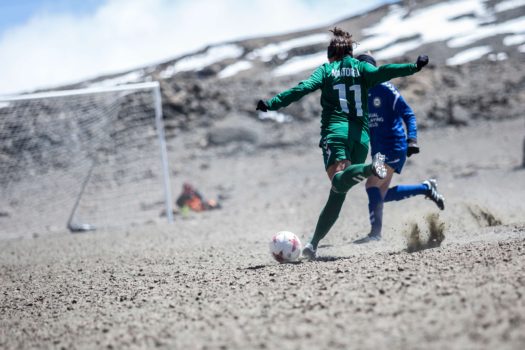 A shot is about to come in on goal

Playing for gender equality in sport

Funds raised will go towards a number of football clinics being run by Equal Playing Field and Football for Peace partners in around fifteen countries over the next two years in the run-up to the 2018 Women’s World Cup. They aim to support football schools and partnerships with clubs to promote gender equality in sport. The partnership with Equal Playing Field and Football for Peace is yet another in a long list of special sponsorships, where hummel seeks to change the world through sport.

Morten Vestberg, Senior Karma & Corporate Communication Specialist from hummel, comments: “No matter your gender, religion or wealth, nothing or nobody should stand in your way when it comes to playing sport. These female footballers have demonstrated that so beautifully. They climbed Africa’s highest mountain to play a football match at an altitude of 5729 metres and set a new world record, while also raising awareness of equality in sport. Together, we must continue to fight against prejudice in sport until there are no more obstacles to playing sport – men and women, on an equal playing field.”

There won’t be too many people that cannot agree on the fact equality in sport is something that needs to remain top of the agenda. Occasions and achievements such as these will go a long way to making sure that future generations will not face the same challenges as people from all backgrounds face today.

hummel is the official kit sponsor for the world record match.