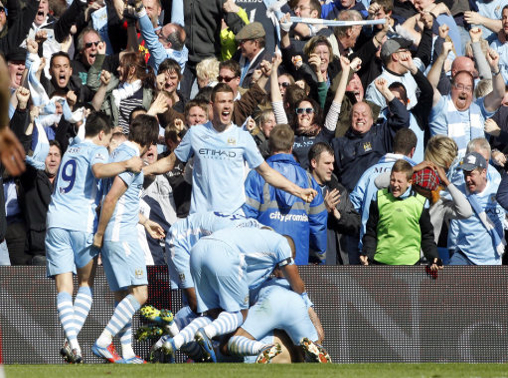 ‘I swear you’ll never see anything like this again.’

Now featuring heavily on rotation on promos for the new season, Martin Tyler’s commentary following that goal has quickly become an indelible part of Premier League history, but like time and tide, the Premier League seemingly waits for no man.

True, we have the European Championships and the joy of the Olympics (not to mention the ongoing saga of Kevin Pietersen and the ECB) but in what has been a summer that has hardly begun weather wise, the relentless ‘Best League in The World™’is back with all its pomp and bravado, seemingly barely pausing for breath since Vincent Kompany hoisted the trophy amid the high drama on a truly epic day final day back in mid-May.

So, with eyes and minds now turning towards the 2012/13 season it is time to look ahead and focus on whether City, having waited some 44 years to lift the league title, can achieve it all over again.

When reflecting back on their achievement, what will resonate most for City players, coaching staff and fans alike is just how hard it was to win. Since the introduction of the Premier League, aside from City and Blackburn with one title apiece, the remaining titles have been won by either United, Chelsea or Arsenal. If the top four was considered a closed shop, multiply that by some when considering who can actually go that step further to get their hands on the trophy.

It has become fashionable at the start of each season to state that this one will be the one to signal the decline of United; that the toll of an ageing core and Glazer’s draining funds from the club will finally tell. Even the most ardent of United fans will concede that last season saw an overachievement from their club and that had the title been won it would have ranked amongst Alex Ferguson’s best achievements (no mean feat considering his CV of course).

Whilst City very much stand on equal (not merely noisy neighbours these days) footing with United in terms of consideration for trophies now, the Reds still have to be feared. City finds themselves in the position of being the hunter, not the hunted. Nothing stings Ferguson quite like a lost title, particularly when it is to a new foe – or in this case a new old foe. In fact, United have a very good record in winning back the title after losing it the previous season. If we look at the era of the Premier League, the only occasion that United failed to win back the title was in 2004/05 (Joe Mourinho’s first title and the middle of three seasons without a title for United). Equally disconcerting from a City perspective will be that not since 2008/09 has a side managed to retain their title the following season; has the ‘dynasty’ era of the Premier League been replaced by parity?

But what of City’s chances? Only Jack Rodwell has arrived at the club during the summer with Mancini’s very vocal displeasure at the lack or arrivals culminating in last week’s press conference in which a barb or two was clearly aimed Brian Marwood’s way. The irony of one or two articles castigating City’s lack of spending though was surely not lost on most given the theme of the past couple of seasons.

It does very much look as though Daniel Agger will not be wearing blue this coming season but don’t be fooled in thinking this means City’s squad will be lacking. Rodwell is clearly a longer term signing whilst Blues’ will be nervously hoping that neither Vincent Kompany nor Joleon Lescott are absent for any sustained period but this is a squad on par with any in the Premier League. There is also the wildcard that is Carlos Tevez; absent for virtually all of 2011/12, he appears to be physically and mentally in good shape ahead of the season. To go a season without any major incident may be a long stretch but an on form and motivated Tevez undoubtedly adds an extra dimension to an already prolific City attack.

City starts the season as slight favourites with most bookies. Chelsea and possibly Arsenal will improve upon last season’s performance but it shouldn’t be forgotten quite how much of a gap there was from the two Manchester sides in 2011/12; to overhaul this would take some doing. Tottenham will again challenge for the top four whilst if Liverpool, under new manager Brendan Rodgers, can improve their conversion rate a couple of percentage points will be closer to the top four too.

The Champions League will be an interesting one for City. They were handed a tough group last season but there was a worrying naivety about their approach and play last season, and including their Europa League forays, do not appear to have fully got to grips with the nuances of European competition. Expectations will be high this time around as Champions of England and Mancini knows his ultimate legacy may well depend upon whether or not he can lift the trophy.

The Premier league however remains the pinnacle. Often referred to as the ‘bread and butter’, this gives an almost disrespectful feel to a competition that is so difficult to triumph in. Mancini’s comments this summer make it clear that domestic success remains the priority.

Whilst success breeds success, equally true is that it breeds expectation. Hopes become replaced with demands; a trophy-less season will now be branded as a failure. This will provide an added pressure to a squad where expectations are already high.

It does feel just about right that they start as favourites though. In their favour they do have the experience of the title win (and we saw what winning the FA Cup the season before managed to engender within the squad), but crucially it wasn’t just winning the title but the circumstances in which they achieved that will provide them of that necessary know-how and ability to navigate the path to be taken to repeat as Champions.

Manchester City striker: I’d rather be in Argentina