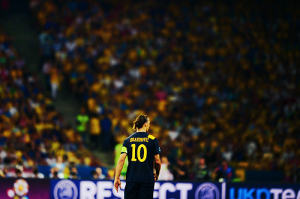 For every critic and doubter, there is a fanatic and supporter of Zlatan Ibrahimovic, football’s greatest enigma. He has the enviable title of the world’s most expensive player when you accumulate all his transfer fees. Love him or hate him, one thing no one can doubt is the technical ability that he possesses. Amongst the most naturally talented footballers on the planet, the question marks of Ibrahimovic have always been whether he delivers on the big stage?

That would depend on what is classed as the big stage but the simple answer probably to the surprise of a few, would be, Yes. Never perhaps has he lived up to the reputation he’s earned around the world in the Champions League but he’s gone some way as to correct that in his time with AC Milan having scored 9 goals in 16 appearances.

Above anything else, Zlatan is a winner. There is no one in top flight football across the world that can boast a better record than the Swede. Ten league titles in eleven seasons with five different clubs is testament alone to the quality of the man and it is in league competitions where Zlatan has proved his worth, especially in the crucial games. Zlatan has found the net in both the Milan derby and El Clasico… The big stage.

Critics may like to object and argue that he’s been apart of the best teams with or without him at that moment in time, these critics are unlikely to watch Zlatan on a regular basis, otherwise they’d be made aware of the pivotal role he plays in every side he features in. For all the negative attention his ego receives, that level of expectation in himself and others combined with his drive is likely to motivate those around him to perform at a level to match his own.

Not your typical striker. Not your typical 6ft 5 footballer either. Ibrahimovic’s technical ability is not generally associated with someone of his height but it doesn’t compensate in anyway for his strength or aerially ability. The other, often overlooked ability is his passing, he isn’t just a goalscorer but a creator and can act as the playmaker to a side which is not uncommon when he drops deep as he tries to dictate the tempo.

Elevated into the spotlight after scoring THAT incredible solo goal for Ajax which all but came to define the man. The confidence, the arrogance and most importantly the brilliance. Golaso after Golaso followed. Capable of explosive shots that can almost burst the net to passing the ball into the net with either left or right foot and more than a handful in the air, the threat posed is endless. However defenders may be wary of physical harm when around the volatile striker as his ill temper and short fuse has resulted in him seeing red on various occasions.

Moving to Italy and league giants Juventus, Zlatan won successive Serie A titles with the Bianconeri (later to be stripped from the club). During his time with the ‘Old Lady’ Zlatan drew plaudits from the elite of Italian football, including Paolo Maldini.

“I think Juventus have made a great signing with him and the way he moves with the ball really does remind me of van Basten.”

After Calciopoli scandal resulted in Juventus being relegated, Zlatan changed allegiance and joined rivals Inter Milan. Personally his time at Inter was more successful in terms of goals but as part of a team Zlatan continued to win league titles for fun. Three seasons under both Mancini and Mourinho saw him score 66 goals in 117 games. In his third season he secured his first Capocannoniere after scoring 25 goals in the league. Despite the best efforts of then coach Jose Mourinho to persuade him to stay for another season, Ibrahimovic moved to Barcelona.

His spell at the Nou Camp saw him labelled as a ‘flop’ but a 1:2 goal ratio suggests it wasn’t as bad as many believe. Yes, the fee was ludicrous and yes it did not work out as expected but let us not judge his career by one season in Barcelona in which he and manager Pep Guardiola did not see eye to eye for much of the duration.

This season gone, marked the first time in his career that he did not capture the Serie A title, a late season collapse after the absence of Thiago Silva meant that one of his former clubs, Juventus were crowned champions but that didn’t take anything away from the individual performance of Ibrahimovic and it was probably his best season to date. 28 goals and 9 assists in 32 appearances meant he ended the season as the league’s top scorer.

Now Zlatan finds himself a part of the “French Revolution” PSG’s very own attempt to take over Europe. The undoubted talisman of the team having scored 11 of his side’s 21 goals this season. The reliance on him to fire in front of goal will be no different to his last season at Milan but Ibrahimovic will be hoping the title ends in his hand this time round. This season he has also achieved something no footballer had ever done before when he scored in the Champions League for PSG as he became the only player to score for six different teams in the competition.

That same reliance has followed Ibrahimovic for most of his international career with Sweden. The load was lightened during the years the team boasted the likes of Ljungberg and Larsson but now the hammer tends to fall solely on Zlatan. His 35 goals in 84 games could well have been better had he not imposed a self exile from the team after being sent home for breaking team rules. Then again, he wouldn’t be Zlatan Ibrahimovic had he not done it.

Arrogance? Or, incredible self belief? How Zlatan sees himself is a major part of why he is the footballer he is. It became a well known fact that Ibrahimovic had a trial at Arsenal when he was just a teenager but when asked to have a trial after he spent time training with the team, he replied.

“No way, Zlatan doesn’t do auditions…I thought ‘You either know me or you don’t and if you don’t know me you can’t really want me.”

The confidence began at an early stage and his decision to stay at Malmo at the time may have been one of the best he has ever made. He has even gone on to proclaim himself as a “living legend” for the club.

“We usually say that you cannot become a legend before death. But I am a living legend – at least in Malmo.”

The fun and games don’t stop with Zlatan there. On two separate occasions he has found himself having a verbal spat with female reporters whilst in Italy. On one occasion Zlatan found himself irritated from the questioning and responded by telling the reporter to ‘Get back in the kitchen.’ The second scenario sees Zlatan being accused over his sexuality and finds a witty response.

“Come To My House With Your Sister And See If I’m Gay.”

The comedy genius isn’t over. Obviously frustrated at the exit of Sweden in the Euros, Ibrahimovic was asked who he thought would go on to win the Euros?

“I don’t give a shit who wins it now. I’m going on holiday. Hopefully in Sweden but if the weather’s bad I’ve got an aeroplane ready”

Possibly one of the only players in the world that puts himself in the same category as Lionel Messi in terms of talent but he isn’t the only one who believes in him.

Jose Mourinho – “But, for me, Ibrahimovic is the best.”

THE FALL OF ITALIAN FOOTBALL