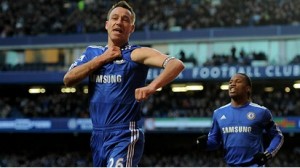 John Terry retired from International football this week after claiming the FA had made his position in the squad “untenable”.

This is a huge turnaround from the statement he made less than five months ago, claiming that nothing would convince him to make the decision to stop playing for his country.

“I’m not going to throw away my international career for anyone, I am proud to represent my country, I will never turn my back on England,” he said. “I was baffled by these rumours about me quitting. I even had players coming up saying they heard I was going to quit. But I never considered quitting.”

Terry had to be confident that he was going to be found not guilty when he went to court, given how limited the evidence against him was, so thoughts of quitting the England team were far from his mind. Whatever people’s opinion on what happened at Loftus Road that day, nobody could seriously claim that he could have been found guilty “beyond reasonable doubt” with anything the prosecution had on him.

The most damning evidence probably came from the lip-readers and even then it was something or nothing. In their opinion, which was deemed to be “educated guesswork”, Terry said “you fucking black cunt”, which would negate his claim that he was repeating back what he heard Anton Ferdinand say to him, as “a fucking black cunt?”. Still, there was no way anyone could be found guilty of a crime on such minimal evidence.

However, in the summing up from the chief magistrate, there were some fairly critical statements that left questions hanging over Terry’s innocence. He claimed it was “inherently unlikely” that Ferdinand accused Terry of calling him a “black cunt” which is what Terry’s defence hung upon. He also said that Terry’s explanation of why he uttered the words “black cunt” is “unlikely” as “it is sandwiched between other undoubted insults.”

Terry’s decision to quit suggests he had previously thought the FA would let this one go, but there is no way they could be taken seriously again if they didn’t pursue this matter with an investigation of their own, after the summary from court seemed to suggest that “not proven”, the name given to this verdict in Scotland, was more fitting than “not guilty”.

The laws of football and the laws of this country can obviously not work in the same way. If they did, both Jonjo Shelvey and Jonny Evans could have been charged for ABH on Sunday and the FA would struggle to prove “beyond reasonable doubt” that a player intended to stop a goal-bound shot with their hand, or the difference between assertive play (no intent to harm) and dangerous play. The FA has to rule based on probability because the vast majority of the cases are judgement calls without any great deal of evidence to consider. When a player is banned for three or more games because of a nasty tackle, decisions over the length of the ban will be made based on their opinion of the potential danger of a challenge and the intent behind it. They will decide when a natural protest to a sending off decision oversteps the mark and warrants an extended ban. They make judgement calls on where the line is drawn between an accidental swing of the arm when jumping for the ball or an intentional elbow.

The FA, you would presume, therefore have no choice but to apply the same rules to Terry’s case, just as they did Luis Suarez. No court would have been able to prove the motivation of Suarez was not just a cultural misunderstanding either and he would have been found “not guilty” too. The stakes are higher, being tarnished a racist for the rest of your career, but the FA can’t change their own rules, can they?

Paragraph 6.8: ‘Where the subject matter of a complaint or matter before the Regulatory Commission has been the subject of previous civil or criminal proceedings, the result of such proceedings and the facts and matters upon which such result is based shall be presumed to be correct and the facts presumed to be true unless it is shown, by clear and convincing evidence, that this is not the case.’

Terry’s defence reminded the FA of their own rule, believing this would be enough to have the case thrown out, however it is likely that Terry’s confession of directing the words “black cunt” at Ferdinand, despite his explanation of context, has forced the FA to act.

The FA might also point to an interview that Terry gave them immediately after the incident. Terry was asked ‘can you remember what you said to him?’ and he replied ‘I think it was something along the lines of ‘you black cunt, you fucking knobhead.’ In an interview with The Daily Mail, Terry changed his story, claiming he said ‘Do you think I called you a fucking black cunt?’ which was his version of events for court too. ‘You black cunt, you fucking knobhead’ is neither sarcastic nor repeating what Ferdinand said as a question, as was the defence in court.

Other convincing evidence might be the fact that contrary to Ashley Cole’s statement, there is signal in the Loftus Road dressing rooms, as confirmed by QPR. Cole and Terry claimed that they went to speak to Ferdinand after the game because of the accusations that were made on the pitch, but Ferdinand claimed he didn’t accuse Terry of anything on the pitch and only heard about the “black cunt” remark after the game. The reason why the lack of signal was relevant is because the prosecution claimed that the reason why the Chelsea players went to the home dressing room after the game was because they had been told that Terry’s verbal abuse had been caught on camera and was spreading around the internet like wildfire.

These two pieces of evidence could warrant the FA looking at the case again, therefore complying by their own rules.

So, with the rulebook being thrown back at him, Terry is obviously jumping before he is pushed, with it looking as though the FA will almost certainly ban the former England captain. His decision to play the victim, insisting the decision is down to the FA’s behaviour, is one that has come under criticism from some sections of the press.

Daniel Taylor, The Guardian, writes: Terry’s argument is a tenuous one, undeserving of sympathy and badly undermined by the fact the FA has a duty, surely, to convene its own inquiry when a Premier League footballer – at the time the England captain, no less – is accused of calling an opponent a “fucking black cunt”. Terry denies the charge and his grievance seems to boil down to one thing: that the FA wants to make sure there was no wrongdoing within its own rules, rather than just letting it pass and doing, well, what would be best for him.

Terry, in short, has no right to depict himself as being victimised when the FA has actually been pretty good to him given the seriousness of the allegations. Previous England managers were not allowed to pick players who were facing criminal charges but the current FA regime never enforced that rule with Roy Hodgson. Terry played in Euro 2012 and the FA relieved him of media duties.

If Terry is saying that the FA should just have moved on to the next subject and ignored a case in which Kick It Out is firmly aligned to the Ferdinands, then the Chelsea captain sorely misses the point.

Henry Winter, The Telegraph, writes: John Terry claimed on Sunday night that the Football Association had made his position in the England squad “untenable”. Nonsense. Terry was the author of his own downfall. Too many scrapes, too many embarrassments. John Terry rang the division bell too often in the England dressing room. If he was chasing the sympathy vote by yesterday’s swipe at the FA, Terry is unlikely to have swung the debate his way.

His “untenable” critique does not ring true. He continued to be picked by England managers during his troubled times, first by Fabio Capello and then by Roy Hodgson. Hodgson backed him strongly, a tactic that looks even more questionable now that Terry has walked away.

Terry’s inclusion in the Euro 2012 squad came at the expense of Rio Ferdinand’s involvement. Nobody fully believed Hodgson’s claim that Ferdinand was omitted “for footballing reasons”. It was to do with the dressing-room dynamic, with the tension between the pair following Terry’s dispute with Ferdinand’s brother Anton. Hodgson invited a man with significant character flaws to the party in Poland and Ukraine.

There is roughly a 0.5% chance of Terry not facing punishment but the fact he has given up playing for England suggests he knows he will join the 99.5% of players who the FA charge and then convict.

18-Year-Old Sensational Talent From Serie A Moving to the England, Club KEEN to Sign Him in January