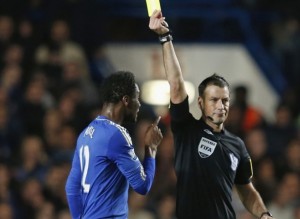 You would have been forgiven for thinking the biggest controversies from Sunday’s game at Stamford Bridge involved the timing of Fernando Torres’ red card and Javier Hernandez’s offside goal, but hours after the final whistle, Chelsea confirmed they had lodged a formal complaint against referee Mark Clattenburg for “inappropriate language” directed at two of their players.

Whilst nothing official has been confirmed, the reported allegation is that Clattenburg called Juan Mata a “Spanish tw*t” and John Obi Mikel a “monkey”.

It has also been reported that neither of the players heard these insults personally but were told of them by their team mates. Oriol Romeu has confirmed Mata only found out about the alleged insults after the game.

“Neither Juan nor Fernando told me they heard it because from what I have understood they didn’t hear anything,” said Romeu. “It was someone else who heard it, but not directly at them. It was another player who heard it and that is what they told me. I didn’t hear anything as I left quickly to go home but after talking to Juan he told me there was some problem and he had to stay. I only know Chelsea made a complaint and I think there could really be a problem if what Chelsea players say happened really happened. If there was really a racist comment or something said against a Spanish player this will be serious. We know in this country people are very vigilant about these issues.”

The names being mentioned as those who heard the insults and passed the information on are David Luiz and Ramires. As the videos below show, neither of these players have a strong grasp of English, if any at all, which adds doubt to the likelihood of them hearing what they say they did. It is also incredible to think that a referee, whose mic can be heard by three other officials, would use racist language on the pitch. That would be hard to believe in any scenario, let alone right now, when the awareness of racism in football is at a peak. However, something being unlikely doesn’t mean it is untrue, as the FA found when determining John Terry was guilty racist abuse when he was England captain. This incident has to be taken seriously and investigated thoroughly. Whilst you would like to think there is nothing sinister behind the allegations, that frustrated Chelsea players didn’t seek revenge for what they believed to be a poor performance from the referee, at this stage, without all the information at hand, the most likely explanation would be a misunderstanding from the Brazilian players. It is puzzling that Ramires and Luiz heard the insults but Mikel and Mata did not.

With the insults apparently taking place on the pitch, Mikel confronted Clattenburg after the game in his office, along with manager Roberto Di Matteo, assistant manager Eddie Newton and chief executive Ron Gourlay.

Clattenburg, his assistants and fourth official are understood to have been stunned by the claims, with Michael McDonough, Simon Long and Michael Jones denying hearing anything of that nature over the officials’ microphone link-up.

Some reports this morning have claimed the exchange was like a “pub brawl” and the threat “I’ll break your f**king legs!” being directed at Clattenburg. Whilst there is the possibility of consequences for the referee, it’s hard to imagine that Chelsea will avoid punishment for their reaction, if the reports in today’s papers are accurate.

Clattenburg filed his match report, including details of the exchange after the match in an “extraordinary incident form”, and the FA have begun their investigations. Clattenburg will today formally deny the allegations when he meets with the FA.

All in all, this is a very strange story and hopefully one that is resolved quickly. Clattenburg will not be officiating any games this weekend, not as a punishment, but to keep him out of the limelight. With just trickles of information available at present, it’s hard to form much of an opinion, but the FA will be closer to working out what actually happened after meeting with Clattenburg today.