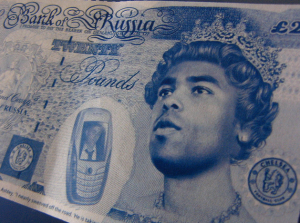 Athletics is a very virtuous pursuit, isn’t it? Strip away all the corporate endorsements (and performance enhancing drugs) and you’re left with sport in its purest form; raw athleticism in a quest to achieve a sort of human perfection. You can’t say the same about football. Team sports are different – and football is different from other team sports. It’s not virtuous; it’s full of cunning (cheating), trickery and Schadenfreude. The team ethic is still important, though. The best footballer in the world will struggle to achieve real success without a reasonably talented and dedicated supporting cast. It’s true that Maradona was practically unstoppable, but even he had some reasonably competent teammates at Napoli and in the Argentina team.

So, the team is important, and surely the collective purpose of a football team is to win as much as possible? And to do that, the individuals all have to be striving to improve their own performance, don’t they? Should I stop asking so many questions? Ok, but to bring us to the crux of the matter – and I’m going to pose another question here – if we assume that the team is integral to the individual, should we be more forgiving of players if they want to move to a club that offers them a greater chance of success?

Whenever a footballer claims he wants to move for ‘professional reasons’ he is usually met with howls of derision from fans of the spurned club. It’s the money, stupid. There is a deep suspicion of footballers who want to better themselves but, sometimes, don’t we all need a change of scene? Robin Van Persie has secured a nice pay rise in moving to Manchester United, but he is also putting his talents under more intense scrutiny than at any other stage in his career. Witness the depressing shadow cast by Dimitar Berbatov to see what can happen to players that fail to meet the required standards (you might argue he did meet the standards, but that’s a different story). That Van Persie is prepared to move from a club where he was the captain, the fulcrum of their play, and adored by their fans, is not a decision he would have taken lightly.

The weight of evidence suggests he is significantly more likely to win something at Manchester United than at Arsenal. The same could be said about Sol Campbell’s move from Tottenham to Arsenal, and of Fernando Torres when he moved to Chelsea. The Spaniard was already on a huge salary at Liverpool, but they had fallen too far down football’s pecking order to retain the services of their best player. What happened to him at Chelsea is immaterial to the fact that his new club were more likely to win things in the next few years.

Given the brevity of professional football career, it’s not surprising that some players want to move if they think they’ve got a chance at a club ranking higher than their current one. But, even if you refuse to forgive such selfish motives – and I’m not claiming to be that forgiving myself – you have to concede that for some the chance to move could mean an opportunity to develop their ability. Great players will shine wherever they play but, returning to the original theme of this piece, football is a team sport. If a great player is supported by other great players, with a collective determination to succeed, their own performance will benefit.

It was enjoyable watching Matthew Le Tissier scoring wonder goals for Southampton. He didn’t have any silverware to point to at the end of this career, but was clearly very happy to have represented the Saints, and retire a legend at the club he loved. This is the intangible element that can’t be quantified or priced – and, going back to the beginning, it is what makes football a peculiar sport. It’s why the fans love loyalty, but it’s not enough for everyone. Some people want material things – something that says they were the best, or at least, part of the best. They want the winner’s medal. We like to think that footballers owe their clubs, but we’re deluded. If some footballers feel they owe it to themselves to move, then it’s probably right that they should. It doesn’t mean we have to like it, far from it, but when they say they’re moving because they want to win things, some of them might mean it.