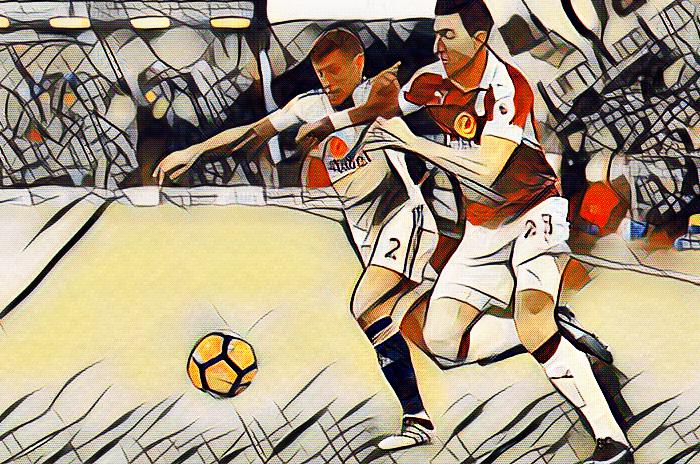 Back in the yesteryear fullbacks routinely were the worst players on the team who had little or no attacking duty and instead were instructed to stay back at all times. They were basically wide centre backs. The evolution in tactics over time has led to them being one of the most important organs of the team if not the most important which is illustrated by the fact that fullbacks have made the most high intensity runs in the Premier League this year. In today’s game in addition to marauding attacking fullbacks we see inverted fullbacks who cut in and be part of the midfield a system deployed by Pep Guardiola at Bayern Munich and more recently Manchester City.

Attacking Fullbacks in the diamond:

Fabio Capello had a reputation for being a dour defensive coach, yet for his first spell at Real Madrid which only lasted a year 1996-1997 he brought the league title to Madrid with the help of a marauding fullback. Roberto Carlos one of the most famous players in modern football who was discarded by Roy Hodgson at Inter Milan for lacking the defensive discipline to be a full back. Yet he was perfectly utilised by Capello and was one of the major reasons in Madrid winning the title that year. Capello used one of the first examples of a narrow formation to incorporate the 3 strikers Madrid had at that time which gave prime license for Carlos to bomb forwards and use his attacking skills. He routinely turned up on the left wing and provided crosses which back then were a dilemma for managers as wingers struggled to deal with him and the defenders were more occupied with the 3 forwards. While Pannuci occasionally went forward but not as much as Carlos and he sometimes dropped in to a 3 man defence to guard against the counter attack and make sure the team was not too exposed defensively.

Now to another flying full back, arguably one of the best right backs in history if not the best. Cafu was another Brazilian who benefited from the diamond formation. He was very similar to Carlos Alberto in his playing style but was obviously more athletic, the athleticism helped him bomb up and down the wing in an era where football was much more physically demanding.

Full backs in 3 at the back formations:

Cafu and Roberto Carlos’s contribution to the World Cup winning team is often overshadowed by the brilliant attacking trident Brazil possessed. Luiz Scolari had played around with a lot of formations and eventually settled on the 3 4 2 1. Gilberto and Kleberson were two very defensive players who were mostly deployed as midfielders with Gilberto as a traditional anchor man rarely venturing forward and Kleberson with a bit more license to roam. The solid defensive shape allowed the front three to flourish and the wing backs to bomb forward.

Here you can see an example of how high and wide Cafu and Roberto Carlos were. Look at the half spaces they occupied and the lack of defensive cover in those same space. This was due to Ronaldinho and Rivaldo cutting inside and drawing the fullbacks with them which led to Cafu and Carlos being afforded plenty of space that Brazil could utilise.

This was an effective tactic which was very similar to the 3-4-3 tactic Antonio Conte used in his title winning season with Chelsea in terms of the freedom it gave to the front 3 and the space it left for the wing backs.

A lot has been said about Conte’s almost revolutionary change to the 3 4 3 and how it changed their season but as you can see above it was used prior and to the same effect. Once again the front 3 was very narrow and they interchanged quite a lot which bamboozled defenders and as you can see in the diagram above allowed the wing backs to successfully utilize the widest half space to great effect. Once again Conte used two defensive minded midfielders to great effect to insure Chelsea had the right balance between attacking and defending, with Kante acting as a tireless box to box midfielder and Matic the more traditional shield.

Their average heat map for the season gives you an example of high and wide they were playing. This allowed the successful transformation of Victor Moses from a below average winger to a good wing back.

Inside Forward + Attacking full back combo:

This partnership if correctly used is devastating and very dangerous. As seen above most of the fullbacks best work comes when paired with a winger who cuts inside. Two of the most successful partnerships in football have been between An inside forward and a full back, Messi and Dani Alves and Ronaldo pre 2014 and Marcelo. How many times have we seen Messi cut inside fake a shot and pass it to Dani Alves who then puts the ball in, the same goes for Ronaldo and Marcelo.

Here is an example of this approach leading to goals as Messi drew the Manchester City players to the middle which opened up space for Alves to run in to and when he eventually got the ball he crossed to Suarez to score.

This can be a double edged sword though as the inside forwards do not help out defensively often which often leads to overloads down the wings and the full back being isolated defensively.

This tactical creation is a brainchild of the ever innovative Pep Guardiola which he used at Bayern Munich and more recently Manchester City. This tactic is ideally used for teams that are possession based and requires the full backs to be technically proficient. It basically involves the full backs cutting inside and packing out he midfield leaving the wingers to supply the width. This creates more triangles in the midfield and almost always ensures that you have an extra man in the middle which makes it easier to keep the ball. This in turn forces the wingers to follow the full backs inside which leads to the creation of spaces for the winger and leaves the opposition full backs isolated against the wingers and vulnerable to one on ones.

The diagram shows the effectiveness of this approach in creating space. The full backs are also very effective in nullifying the threat of a counter attack as they can move fluidly into the half spaces in the midfield or the flanks depending on the position of the winger and the game situation.

This approach was far more successful when Pep used it for Manchester City due to the nature of the wingers. Sterling and Sane are more direct than Robben and Ribery and it helped that Sane was on the left (left footed) and Sterling was on the right (right footed). This meant that they could hug the touchline and get on the outside more naturally. You can see how narrow Walker and Delph were playing above and how wide Sane was which forced Azpilicueta to track him and opened up space for sterling who was completely unmarked. Pep used this system to help keep the ball against Chelsea’s packed midfield and he kept the wingers high and wide up the pitch to pin the wing backs back and prevent them from getting forward. This wasn’t helped by the fact that Azplicueta was playing who is naturally more suited to defending than attacking.

The tactical evolution in football has led to fullbacks being more important than ever, as illustrated in the article full backs these days perform many vital roles. To be an elite fullback in today’s game you need to be almost a complete player, you need to be technically sound and physical. You very rarely see teams setting up in two banks of four anymore with the fullbacks limited to defending. Narrow formations are very much a trend in football right now which means fullbacks are being more and more valued by the second. Look at the money Pep spent on fullbacks this season, this shows how vital fullbacks are to his system. The stats also back this argument as you can see below fullbacks are becoming more and more involved in the creation and scoring of goals (Marcos Alonso’s double vs Spurs this season, Dani Alves vs Monaco last year.) The rise in the importance of full backs correlates directly with the number of quality full backs in the world right now. You very rarely used to see people talking about full backs amongst the world’s elite but today many fullbacks are considered among the world’s best players.