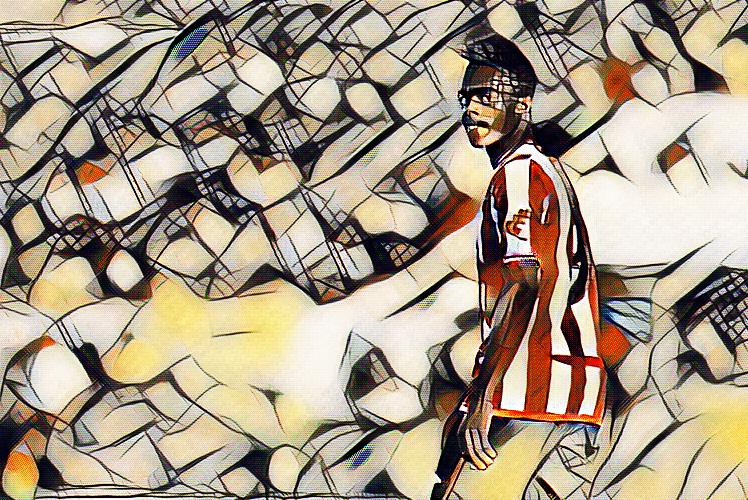 Inaki Williams: the first black player to score for Athletic Club, in the Europa League no less, who last month scored one of the club’s greatest goals in its long, illustrious history with a thumping volley against Getafe – but is there more history to be made?

Williams’ 2017/18 season so far is perhaps indicative of Athletic’s inconsistent campaign under Jose Angel Ziganda, who was appointed as manager after Ernesto Valverde’s departure to Barcelona. Los Leones currently sit in 12th place after yesterday’s 1-1 draw against Valencia, a far cry from last season’s seventh-placed finish.

Five goals, and four assists, in 26 La Liga matches is a poor return for a forward player linked with Manchester City, Liverpool and Borussia Dortmund; he was rewarded with a new contract, which includes a €80 million buy-out clause, in January – it is time that this figure is justified.

The onus to score lots of goals for Athletic has fallen on the shoulders of Artiz Aduriz in recent seasons. The 37-year-old has scored eight times in 25 appearances this campaign, but has previously managed at least 14 in his last five seasons.

He scored twice in Athletic’s 3-1 Europa League round of 32 first leg victory against Spartak Moscow, which took his tally for the competition to 30. Only Radamel Falcao (31), Klaas-Jan Huntelaar (34) and Henrik Larsson (40) are ahead of him in the all-time top scorer standings.

It was announced that Aduriz had picked up a leg injury that meant he was deemed unfit to last the entirety of the second leg, which left Ziganda with very few options.

Since 1912, the club has abided by an unwritten rule whereby only players with connections to the Basque Country are signed. This concept falls hand in hand with Basque nationalism, and is widely praised for promoting young players from the cantera (homegrown) system, whilst also allowing for the arrivals of signings desperate to represent their region with pride.

It does, however, mean that Athletic’s squads often lack strength in numbers; the only other recognised forwards in the first-team squad are Williams, Kike Sola and Sabin Moreno. The latter pair have scored just seven La Liga goals between them in 57 appearances. Iker Muniain’s absence with a ruptured cruciate ligament, which has seen him sidelined since September of last year, meant that Williams was the only option for Ziganda in attack.

Athletic lost the game 2-1, but they had still done enough to progress to the round of 16 on aggregate. Williams, though, performed poorly. His pace and trickery got him into excellent positions, but his final ball let him down. A wayward shot from Inigo Lekue’s cross in the first half, which flew well over Aleksandr Selikhov’s goal, showed Williams’ lack of composure. He was unmarked inside the penalty area with time to control the cross and turn to shoot, but he instead ballooned his shot well over first time.

Aduriz was introduced from the substitutes’ bench in the 84th minute for Raul Garcia; as soon as he stepped onto the pitch, he was met with a rousing reception from the San Mames faithful. Athletic’s fans and players are renowned for their togetherness, their pride and their delight in representing the Basque Country – was Aduriz’s welcome because the home faithful were extremely glad to have him back, or was it applause at an attacking change at the expense of a pitiable Williams?

Next time out, in a 2-1 victory against Malaga, Williams was dropped in favour of Aduriz in the centre-forward position. Optimists in Williams’ corner would argue a home tie against the league’s bottom club was the ideal time to bed Aduriz back into the rigours of league football, but others would say that, with a realistic chance of stealing a Europa League qualification spot, Ziganda does not believe Williams merits a place in his strongest starting side.

With Muniain set to return soon and Oscar de Marcos’ form as a marauding right midfielder with the know-how to track back and defend against the best wingers La Liga has to offer, could Williams’ place be permanently in doubt?

De Marcos scored the equaliser in yesterday’s draw against Valencia, with Williams once again named as a substitute. He was brought on for Markel Susaeta but had little impact.

Williams should no longer be considered as a young prospect. At 23, with over 100 league appearances in four seasons, Williams has played more minutes than any other Athletic player this campaign and, in theory, represents a future at the club without Aduriz.

But, in the immediate future, what part will Williams have to play? All eyes will be on Ziganda’s team selection for the tough trip to Sevilla.