Skip to content
40 Comments on Is Suarez not used to the booing by now?Posted in International, Premier League By By Far The Greatest TeamPosted on August 2, 2012June 30, 2017Tagged Liverpool, Luis Suarez, Olympics, Uruguay 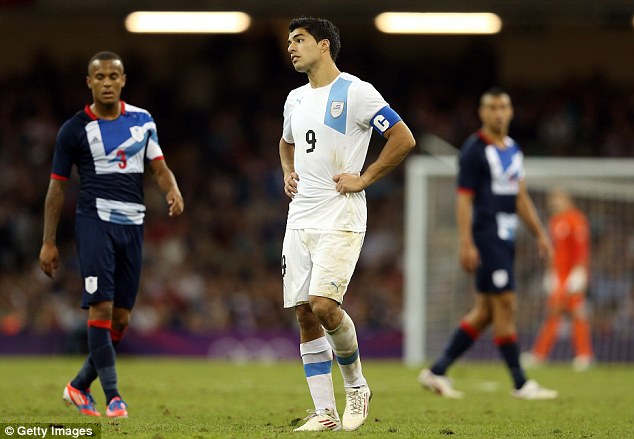 The FA ruled that on the “balance of probability”, Luis Suarez racially abused Patrice Evra in a game between rivals Liverpool and Manchester United at Anfield. The most damning evidence was probably the argument that “negro” could only be considered a safe term if used in a friendly way. Given that Suarez and Evra were in the middle of an argument, with the Uruguayan having already kicked Evra on the knee before hitting him around the back of the head and pinching him, it was hard to believe Suarez was using the term in a “conciliatory” way as he claimed. Suarez’s story changed several times whilst Evra’s remained the same, which lead to the Liverpool man being deemed an unreliable witness.

The FA report: “The impression created by these inconsistencies was that Suarez’s evidence was not, on the whole, reliable. He had put forward an interpretation of events which was inconsistent with the contemporaneous video evidence. He had changed his account in a number of important respects without satisfactory explanation. As a result, we were hesitant about accepting Suarez’s account of events where it was disputed by other credible witnesses unless there was solid evidence to support it.”

It also didn’t help his case when he admitted that he lied in his initial statement, when he claimed he pinched Evra to defuse the situation. The FA report read: “It was plain to us that Suarez’s pinching of Evra’s arm was not an attempt to defuse the situation. It could not conceivably be described in that way. In our judgment, the pinching was calculated to have the opposite effect, namely to aggravate Evra and to inflame the situation.”

Had Suarez’s case gone to court, he would have been found “not guilty” (or “not proven” as the Scottish more accurately describe the judgement) just as John Terry was, because there wasn’t the evidence there to prove guilt “beyond reasonable doubt”. The Chief Magistrate in Terry’s court case has made it easy for the FA to charge Terry though and find him guilty like Suarez because of what he said in his summary. He said it was “inherently unlikely” that Ferdinand accused Terry of calling him a “black cunt”. He also claimed “Mr Terry’s explanation is unlikely. It is sandwiched between other undoubted insults.” The FA make a judgement on what is most likely to have occurred and in the case of Suarez, the most likely explanation is he was racially abusing Evra. Just like Terry, this wouldn’t make him “a racist”. Yes, we all know Suarez has a black grandfather, just like some of Terry’s best mates are black, but in the heat of the moment when wanting to wind up an opponent, racist terms can seemingly slip out.

For Suarez, it is not just the fact he was deemed guilty of saying this to Evra, it is his subsequent behaviour, and the behaviour of his club, that has lead to increased unpopularity. The Liverpool players and manager donned a t-shirt with Suarez on the front after the verdict had been reached and no apology was offered to Evra. Even if Suarez hadn’t meant to offend Evra, it was clear that he had done, so why not apologise? Suarez then refused to shake Evra’s hand when the players next faced each other, although he did apologise (after receiving a bollocking) for this.

It would be foolish to think this is the only reason he isn’t liked in this country though. He is a cheat. Whilst fans of all teams have a player in their ranks who goes to ground without any contact, these players are immensely unpopular when they play for another club. Suarez is also the player than denied Ghana progression in to the World Cup semi-finals after he blocked a clear goal with his arms. Let’s not forget the seven game ban he received in Holland less than two years ago when he bit Otman Bakkal during an argument on the pitch. For all his footballing ability, which makes him a hero at Anfield, he’s an all round bad egg, and the abuse he dished out to Evra was just the icing on the cake.

It should have come as no surprise then that the British crowds have given Suarez a hard time in his games for Uruguay during London 2012. Just as he was booed at every Premier League ground he visited last season, he has been booed at Old Trafford, Wembley and the Millenium Stadium.

“Disgraceful behaviour by parts of the Old Trafford crowd for booing Suarez… should stay at home #olympicspirit” tweeted the former Liverpool player, Dietmar Hamann, after the first game, as if this was the 1936 Olympics in Berlin. How dare the British crowd show their dislike of someone who has been deemed guilty of racially abusing an opponent, eh Didi?

Despite boasting talents like Edinson Cavani, Sebastián Coates, and Suarez, Uruguay managed just three points at the group stage, after beating the United Arab Emirates, but losing to the ten men of Senegal and Team GB.

Ahead of the final group stage game against Great Britain, Suarez was asked about the booing he had received. He played down the impact of it though, insisting it didn’t bother him. “Fans should focus on themselves and their own team,” he said. “What interests me is the Liverpool fans and the Uruguay fans.”

Suarez’s team mate, Cavani, warned the GB fans to boo at their peril. “Luis knows that the crowd might be against him, but that is the worst thing that they can do,” said the Napoli striker. “He can punish any team in the world, but if you antagonise him you will give him more of a reason to punish you.”

Great Britain won 1-0 and Uruguay were sent home, but not before they tossed their toys out of the pram.

“I’m tired of this situation with Luis,” Coates said. “I think it has gone too far and I don’t like to see him treated like this. I know the kind of person he is and I think the abuse he gets is very unfair. He knows all his team-mates and a whole country are fully behind him and I think fans over here should leave him alone.”

“I think they jeer me and they boo me because they must be scared of facing a player like me,” he said. “They fear me, but that doesn’t affect me. I’m just hurt because we lost and we are going home. I can take the abuse… but I think it was a total lack of respect from the crowd to boo when we were trying to sing our national anthem. I think those things should not happen.”

In 270 minutes of football at the Olympics (60 minutes of that against the ten men of Senegal), Suarez failed to score even once. New Zealand’s Chris Wood, who is currently on loan at Bristol City, has scored at this Olympics. As has Egypt’s Marwan Mohsen (Petrojet), Japan’s Yuki Otsu (Borussia Mönchengladbach II) and UAE’s Rashed Eisa (Al Wasl), amongst others. Whilst there’s no doubting Suarez is a better player than any of these, he’s hardly done anything to leave opposition fans quaking in their boots this summer. Maybe Suarez is naive enough to believe he’s booed merely because he’s good, and judging by some of the statements he’s made since Evragate, that wouldn’t be beyond the realms of possibility. This remark though is more likely borne from frustration and petulance, with the Uruguayan striker, contrary to his statement, becoming utterly fed up by his pantomime villain status (King Rat, anyone?).

It’s going to be a long season ahead if Suarez is tired of the booing already though. Believe me, there’s plenty more where that came from, Luis.