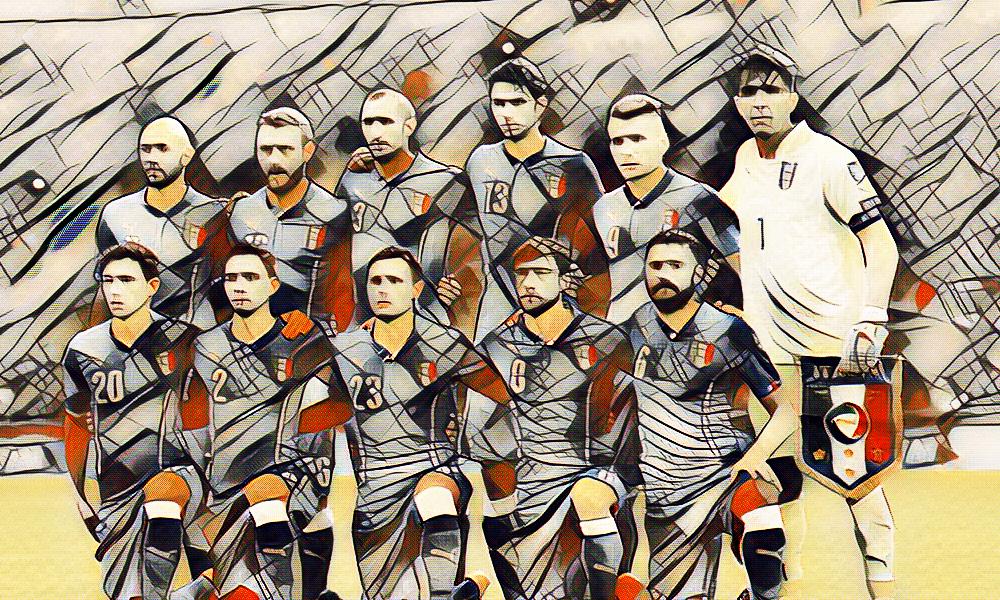 It is officially August. Already. At this point in the summer, pretty much everyone wants the new season to begin. Pre-season friendlies and tournaments are okay stop-gaps to fill the time, but there’s only so many times you can read the same transfer speculation before succumbing to boredom. Therefore, here is something a little different to hopefully brighten up your news feed. With a year to go until the World Cup, Italy has a number of breakthrough stars and young talent staking their claim for a place in the national team. With that in mind, here is the probable team boarding the plane to Russia. If you want to have an early bet on Italy to win the 2018 World Cup, head over to our friends at mybestbettingsites.co.uk – they will look after you alright.

The evergreen goalkeeper will be 40 years old by the time the World Cup rolls around in 2018. To even still be playing at that age is a remarkable achievement in itself, never mind at the highest level. Few current players can claim true legendary status, however, Buffon is certainly held in that regard. With an incredible 169 caps to his name, he is one of only three players left from the squad which won the World Cup in 2006 (along with Andrea Barzagli and Daniele De Rossi). Still undisputed number one at Juventus, Buffon will likely enter the World Cup as first-choice goalkeeper, with natural heir Gianluigi Donnarumma still not experienced enough to take over such responsibility.

The youngest member of the familiar three-man defence for Italy and Juventus, Bonucci has now left the Serie A champions for a revolutionised AC Milan side. Previously linked with a move to the Premier League, Bonucci’s performances has elevated him to one of the best central defenders in world football. His position is perhaps the safest in the back-three, having just turned 31 at the time of the World Cup, Bonucci is still well in his prime as a defender.

A tough call between Romagnoli and Juventus prospect Daniele Rugani, with both certainly becoming the backbone of the national side in years to come. However, with a seasons’ experience next to Bonucci, Romagnoli just beats Rugani to a starting place, as the Juventus youngster may spend some of the season on the bench. This is particularly likely if Juventus switch to a back four, with Chiellini and Barzagli occupying the starting positions. Still, not a bad pair to learn from.

How can someone imagine an Italian defence without the big, buzz-cut beacon that is Giorgio Chiellini? Infuriating at times, but equally incredible, it seems for every goal-saving tackle he makes, a howler of a touch or pass follows. One thing that cannot be denied is the passion and commitment Chiellini shows every time he represents the Azzurri. That kind of leadership is vital, especially in a World Cup run. Chiellini will be hoping he stays injury-free this season to make sure of a starting place. Me? I just hope he plays enough for my favourite football analyst (my father) to shout, “ma per chi gioca questo asino?”

Translation – “Who does this donkey actually play for?”

Think of a cross between the genius playmaking ability of Andrea Pirlo and the tenacity and work-rate of Daniele De Rossi. The result is Marco Verratti. Described by Xavi as ‘one of the best midfielders in the world’, Verratti was unfortunate to miss Euro 2016 following surgery from a hernia. He may be small in stature at just five-foot-five, but Verratti has the presence of a player a foot taller thanks to his tireless work in midfield and class on the ball. Italy have needed an architect at the base of midfield since Pirlo’s departure, and while players like Marco Parolo are decent enough to plug some of the gap, there is still a gulf in class missing from the team without Verratti’s presence.

Whilst personally I would pick youth over experience, unfortunately I am not Italy manager (yet). Knowing Italy like I do, old heads will likely start over energetic young players. Like his midfield partner Verratti, Marchisio missed out on Euro 2016 following a ruptured ACL in April 2016. Playing a 3-4-3 formation would require some energy as well as tactical experience to make up for having only two central midfield players. Fortunately, Italy have both in Claudio Marchisio. The ultimate all-round midfielder, Marchisio is the perfect partner and mentor for Verratti. Like Chiellini, he can only hope that his frequent injury problems stay away, especially the season before a World Cup.

I have a horrible feeling that Mattia De Sciglio may actually start in the World Cup. A simple change in formation would remove the need for the inconsistent left-back, however, I have committed to this formation so too little too late. Left-back is the one position which Italy lack in terms of an undisputed starter. Contenders for the position such as Matteo Darmian predominantly play on the right, leaving no choice but to play Juventus’ new signing, once hailed as ‘the next Paolo Maldini’. Oh 2012, how naïve we were.

Moving on to a much stronger and better contested position, once again first choice Alessandro Florenzi can only hope to stay injury free. Again, an ACL is the culprit here, although to Florenzi’s defence he is not an injury plagued player. Presuming he recovers well from the injury (easier said than done), hopefully Florenzi can return to form and to Roma’s starting line-up. His energy and all-round qualities would be a major asset down the right, adding defensive solidity as well as accurate deliveries into the box. A benefit of playing in this formation is that he could even drift into midfield to help out the central duo when needed, where he has proven more than capable of playing.

‘Lorenzo Il Magnifico’ has been nothing short of a revelation for Napoli since Gonzalo Higauin’s departure and Arkadiusz Milik’s injury (another name to break my laptop). As part of a deadly front-three along with partners Dries Mertens and Jose Callejon, Insigne will be looking to add to the 18 league goals last season and add a much-needed injection of pace and agility to the national side.

Fiorentina’s main man has been snapped up by Juventus after scoring 16 goals in all competitions last season. Bernardeschi has received high praise from the likes of legendary manager Arrigo Sacchi, mostly for his ability to drift by players and create opportunities. The winger will have another season’s worth of experience by 2018 and will be 24 at the time of the World Cup. Having two wingers in their prime will be a benefit for our next and final player…

Belotti has shot to fame this season by scoring a bag full of goals, 26 in 35 Serie A in fact. The striker is still being heavily linked with AC Milan who are in the market for a big name striker. The fee for Belotti is likely to be very high, considering he has a 100 million release clause should he move for a foreign club. Wherever he ends up, Belotti needs to make sure he has another stellar season to secure his place leading the line into the World Cup.