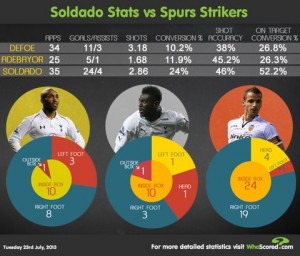 A statistical comparison between Tottenham’s current strikers and Roberto Soldado. (Via WhoScored.com) 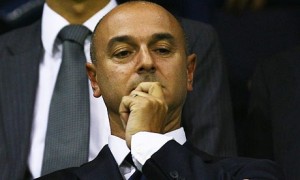 Let’s face it. Daniel Levy’s stubbornness in the transfer market in the last 11 months have cost Spurs dearly. Champions League football is yet another year away from White Hart Lane aswell as the daunting possibility of Gareth Bale’s inevitable departure being a year earlier. Daniel Levy haggling during transfer negotiations are world-renowned and has garnered a heavy reputation as a hard-bargainer. His annoying but usually successful techniques of bringing down prices have helped Tottenham coup some of Europe’s biggest talents for relatively peanuts. Van Der Vaart, Holtby and Lloris being prime examples of players that arrived in North London for low transfer fees; with Lyon President Jean-Michel Aulas describing negotiations during the Lloris deal as the “hardest in the 25 years at the club”.

Yet where Daniel has excelled, he has also faltered to devastating effect. The constant pulling-out from deals has left many Spurs fans annoyed, with Levy’s inability to wrap up deals costing Tottenham players. Levy leaving Joao Moutinho till the last few hours of last year’s transfer deadline day meant Spurs missed out because paper work could not be submitted in time; while Leandro Damiao’s transfer broke down earlier this year over the suppossed fee, despite Spurs desperately needing reinforcements. It is increasingly evident that Levy’s tactics have back-fired in the last year or so when he could be backing his new manager with to adequate resources to compete. His obsession with driving a hard-bargain and his stubbornness to cough up the extra few bucks means Spurs, inevitably, miss out on big players.

With Mourinho back, the top 3 places seem cemented, leaving just one spot left for the highly coveted chance of playing in Europe’s biggest competition. With Arsenal (again) seemingly having trouble acquiring players, this summer seems to be the perfect opportunity for Spurs to finally leap frog the Gunners.

Regardless of Arsenal’s incompentence, domestic competition has never been stiffer, so the time for Levy to back AVB with hard cash has come. Daniel Levy should not be put off spending his money considering Andre Villas-Boas’ transfer record in England – which is absolutely impeccable; it’s hard to find a single player he signed struggle. Juan Mata, Romelu Lukaku & Jan Vertonghen are prime examples of players he has brought from oversees to roaring success. AVB has already sought out Brazilian midfielder Paulinho, and the deal to send him to Spurs for £17m already been completed. Yet despite signing one of Brazil’s finest talents, Spurs fans alike are all worried this could be another of those transfer windows; where they sign an excellent player but miss out on a much-needed striker. With Paulinho & young FC Twente winger Nacer Chadili already in the bag, Tottenham are now reportedly in for Valencia striker Roberto Soldado. Although Daniel Levy may have been slightly hesitant to heavily fund Andre-Villas Boas last season, he should not hesitate to now after Andre proved his worth this and showcased his tactical nous to rack up Tottenham’s highest ever points total.

To say Spurs are in desperate need of a striker is massive understatement. Tottenham’s current strike force is the epitome of inconsistence. Jermain Defoe’s early season form was sensational and it looked like he’d cement his place as the undisputed striker. However injuries disrupted his rhythm and his form dropped dangerously as he scored only a solitary goal in 2013 – a truly woeful statistic for a player who offers very little if he isn’t scoring. As for Emmanuel Adebayor, he has enjoyed dogs abuse from many Spurs fans all season – a shadow of the man who scored 18 goals and recorded 12 assists the year before. So poor were Defoe’s & Adebayor’s performances during the second half of the season, that AVB simply played Bale as a deep-lying center forward; whose brilliance pulled them out of trouble time and time again. The need for a striker is at breaking point and one of those two need replacing with a hungry established striker. Enter Roberto Soldado.

The former Real Madrid striker is Villas-Boas’ seemingly preferred target after not being impressed by Benteke and Damião. The Spanish international netted 30 goals last season – a brilliant return during Valencia’s worst season in recent memory. After missing out on Eurpean football, Soldado is reportedly desperate to seek pastures new and the appeal of the premier league has caught his eye. Roberto would slot in perfectly at Spurs in Andre’s rumoured 4-3-3 formation next season. Having played most of his career as the lone striker, Soldado’s goal-scoring abilities and hold up play are his strongest attributes – a strong mixture between Adebayor and Defoe. Soldado also boasts one of the most extraordinary conversion rates in football, scoring with 27% of his shots; a phenomenal, refreshing statistic for Spurs fans after watching Adebayor last season.

Roberto Soldado would be a test of Spur’s and Levy’s ambitions, a test they must past if Andre-Villas Boas is to take Tottenham Hotspur to the next level.

Should Manchester United, Liverpool and Tottenham Hotspur sell their stars?