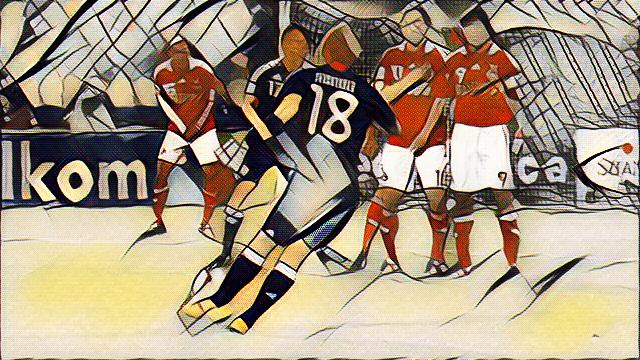 A dazzling knuckleball free kick from 35 yards. A curled set piece from 25 yards. A tap-in after some dazzling skill and trickery. June 24th 2010 provided three resplendent goals which defined a memorable FIFA World Cup South Africa win for Japan over Denmark in the final round of Group E games.

Going into the match, Denmark recovered from their 2-0 defeat to The Netherlands with a 2-1 win over Cameroon with goals from striker Nicklas Bendtner and Dennis Rommedahl and sat in third place in the group on goal difference. Japan too defeated Cameroon 1-0 thanks to Keisuke Honda followed by a 1-0 defeat to The Netherlands meaning the neutral goal difference put them in second place and only having to draw their final game against the Danes and still progress.

Having secured second spot in the group, the victors would go on to face Group F winners Paraguay. The importance of the match meant Japanese coach Takeshi Okada decided to field the same starting lineup who had played well in their previous two games. Danish Coach Morten Olsen introduced Thomas Kahlenberg in the place of Jesper Gronkjaer in midfield whilst giving defender Per Kroldrup his FIFA World Cup debut since Simon Kjaer was suspended.

In front of just under 28,000 spectators, the Thursday evening game at the Royal Bafokeng Stadium got underway, with Japan controlling the early minutes of the action. Chances at either end fell to Daisuke Matsui and Jon Dahl Tomasson, but it was Japan who broke the deadlock after 17 minutes when Keisuke Honda hit a home a superb knuckleball style free-kick from 35 yards into the left-hand corner of Sorensen’s goal. The Danish keeper attempted to track the ball as it fired closer towards his goal but the swerve and power was too much to deny the incredible strike from distance.

Trailing 1-0, Danish captain Tomasson had another chance to score but failed to connect with a long pass from Christian Poulsen and Japanese goalkeeper Eiji Kawashima impressively parried away the ball. With half an hour gone, it went from bad to worse for the Danes as Japanese midfielder Yasuhito Endo’s found the back of the net with a right-footed free-kick from 25 yards past the outstretched hand of Sorensen. Needing to get ahold of the game and turn their fortunes around, Danish coach Olsen made the first half tactical substitution to take Martin Jorgensen off and bring from Jakob Poulsen in the midfield. A free-kick from Christian Poulsen was the closest Denmark got to the Japan goal in the first half but keeper Kawashima comfortably gathered, whilst Japan right-back Yuichi Komano shot from a tight angle but was turned over the bar by Sorensen.

The second half commenced in similar style to the first as the Danish goal was tested once again, but this time it was an error by keeper Sorensen who had the crossbar to thank for. A 40+ yard free kick by Endo, scorer of the second goal, looked to be comfortable floating into the hands of the Sorensen, only for the keeper to spill the ball off the crossbar and back into play, just inches away from being a humiliating own goal. Opportunities to half the deficit fell to Kahlenberg who reacted late at the back post to a cross and his ‘stuck-out-foot’ attempt went wide from close range, whilst Jakob Poulsen and Daniel Agger’s attempts from range were comfortably saved.

Shortly after substitute Søren Larsen hit the crossbar from his wicked turn-and-shot from outside to box, Denmark finally had the opportunity to get back in the game from the penalty spot after Agger who deemed to have been pushed by captain Makoto Hasebe in the Japan box on 82 minutes. Up stepped the captain Tomasson who, having missed a number of chances in the game, was searching for his 52nd international goal to match the record of his nation’s then-leading goalscorer Poul Nielsen and get his side back into the game. His penalty was initially saved by Kawashima, only for the Japanese keeper to parry the ball into the path of the onrushing striker who poked in a rebound to Kawashima’s visible frustration through punching the ground.

The usual change in momentum to find an equalising goal in the final minutes of the game having just scored was not to be for Denmark as Japan, on 87 minutes, sealed the memorable victory thanks to the skill and trickery from star performer Honda. Facing the tired and leggy Danish defence, the forward cleverly turned Rommedahl on the edge of the box and assisted a Shinji Okazaki tap-in with a silky side foot pass to give Japan a two goal lead and send them through to the Round of 16. A late penalty claim for handball by Denmark after Agger had a shot blocked inside the box saw the match come to a close to the sounds of cheering Japanese supporters and a loud collective buzz from the infamous vuvuzelas.