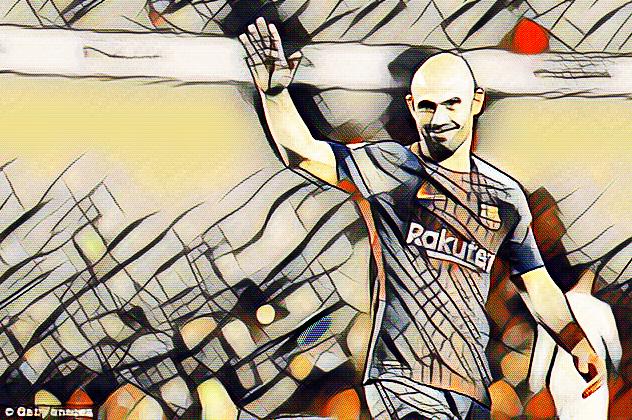 One of the many beauties of football is the many weird and wonderful paths players take to make it to the top. It’s those journeys that provide us with the “Did you know he played for …” moments that win pub quizzes and evokes the typical emotional response from friends:

For Barcelona’s unsung genius, Javier Mascherano, it was the time he played for West Ham under Alan Pardew. *That* picture next to the manager and Carlos Tevez will live long in internet folklore, featuring a wry smile from Pards and some sort of nightmarish grin from Tevez. But, behind Mascherano’s forced expression – the knowledge that one day he was destined for far greater things than being coached by an Ibiza regular.

Before his brief stint in London, Mascherano came through the ranks at River Plate, making his debut for the Argentinian giants at 19. Remarkably, and perhaps a nod to being wise beyond his age, Mascherano made his senior international debut before his club debut in 2003. He was an already an exceptional player at youth level, playing mainly centre-midfield as he rose through the age groups with ease.

That being said, it was still some time before Mascherano became a fully-fledged international regular, he made appearances at the FIFA World Youth Championship in 2003 and the Under-23 tournaments in 2004.

At club level, he was thrown in at the deep-end, experiencing success and heartache in equal measure. River won domestic silverware but also lost the Copa Libertadores semi-final two years in a row, with the first loss being to rivals Boca Juniors.

Mascherano then made the odd leap to Corinthians mid-season in 2005, suffering a fractured foot after just nine games. When he did play, the Argentine was so impressive that European clubs started to pay attention to the little maestro. Real Madrid were among the giants rumoured to be interested in signing Mascherano, but in the end, he made another move which could only be described as odd. West Ham.

Maybe a better and more technical way to sum up the transfer would be ‘incredibly dodgy’. There was a suspicion that West Ham didn’t actually own the players, but that third-party agencies instead were the true owners and that the club was preparing for a takeover. This turned out to be the case, and the club descended into chaos which translated on to the pitch (although, the club/Pardew ratio of blame is tricky to work out, so let’s just blame both equally). In amongst the turmoil, Mascherano played seven games with the football world crying out for him to leave.

Eventually, he was allowed to leave for the much greener pastures of Anfield and finally started to fulfil his potential as a Liverpool player. His incredible tactical reading of the game and cool, composed play on the ball started to gain high praise from teammates and managers. Xabi Alonso said: “He is analysing and thinking about each moment on the pitch.”

“One of the best young players I have seen in the last years and the biggest talent. He is a monster of a player and destined for great things.”

“I knew about this player when he was with River Plate. He was playing in their reserve team but already on the national team. That shows you the quality and the character of the player.”

Mascherano missed out on the miracle of Istanbul in 2005, but featured in the second Champions League final against AC Milan in 2007. He worked tirelessly to stifle the legendary midfield including Kaka, Clarence Seedorf and Andrea Pirlo. Liverpool lost 2-1 but Mascherano was nominated his side’s man of the match.

His tough-tackling and no-nonsense approach to the game made him a fan-favourite, a combination of a wise, old head and cultured playmaking, as well as a warrior’s approach to defending. However, it was also a dangerous combination and occasions arose where fans would be reminded that Mascherano was still a raw talent.

He was sent off at Old Trafford for protesting a yellow card given to Fernando Torres and had to be dragged off the field by teammates. Mascherano also finished the 2009/10 season with the worst disciplinary record in the league with nine yellow cards and two reds. Despite being far from the complete package, his performances were enough to entice the world’s top clubs, namely Barcelona.

When the Spanish giants came calling, it was hard for the Argentine to say no. Despite becoming an Anfield favourite, he ultimately won no silverware at the club and after coming of age during his time at Merseyside, it was now time to win trophies.

In August 2010, Mascherano joined Barcelona for €24 million. He shifted positionally from a defensive-midfielder to mainly a centre-back, but was still occasionally used in midfield as a shield for the back-four.

He formed the ultimate ‘big man small man’ partnership, but instead of up front, it was one half of a centre-back pairing with Gerard Pique. With Carles Puyol’s time winding down, Mascherano and Pique lead Barcelona to four La Liga titles in six seasons, as well as two Champions Leagues and four Copa del Rey titles, winning the treble in 2015.

He became Mr Consistent, a player happy with doing his job and doing it well, with no interest in unnecessary tricks or wandering up to score goals. Maybe this is why Mascherano has been undervalued at times, with the MSN trio grabbing the headlines up front, praise was diverted away from the defense which became a watertight unit. He made no less than 40 appearances for Barcelona until this season, an amazing tribute to his professionalism which allowed him to stay injury-free. It is fair to say he gave his all to the club, and is only right he gets the praise he deserves as he leaves for China.

It’s hard to emphasise enough how much Mascherano did not care about scoring goals. One solitary strike in 334 appearances for Barcelona. To put it in perspective, when he scored two goals in four days for Argentina, he doubled his record for his near eight-year tenure in Spain. In fact, he has only scored six goals throughout his entire career. Now that a move to China has been agreed, it’s the perfect time for the little Argentinian to change his mind and become a number nine.

Mascherano also managed the small feat of 141 appearances for Argentina in an international career which still isn’t over. He played every minute of the 2006 World Cup campaign, and whilst he tore teams a new one at international tournaments, Mascherano decided to take that phrase one step further at the 2014 World Cup. In the process of making a goal-saving tackle from Arjen Robben, he literally tore his anus. While Argentina lost in the final and the trophy went to Germany, Mascherano surely deserves a statue for his sacrifice. His performance merited at least an individual award, he had the most tackles of any player at the tournament and third-most passes. Statistically, he was probably more-deserved of the best player award than Messi was. Maybe I’m being a tad anal.

Either way, in the era of football vanity that we live in, where players literally check facial injuries with a phone camera, Mascherano deserves to go down in history as one of the best, no-nonsense defenders to have graced La Liga.