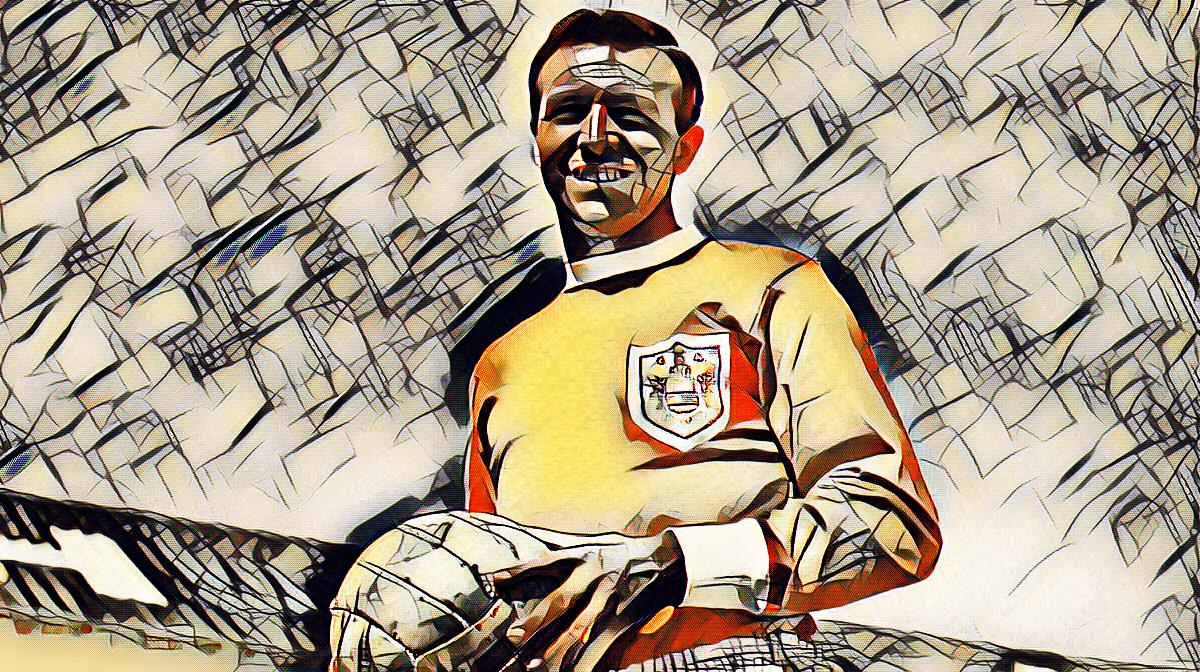 He became the first English coach to reach the European Cup final when he led Leeds United to the final in 1975 against Bayern Munich. During his playing career, he was faithful to one club for his entire career. This Tuesday he passed away at the age of 82. This is the story of Jimmy Armfield.

Known as “Mr. Blackpool” he has both a statue outside Bloomfield Road and a whole stand inside the stadium named after him. He was flattered when the statue was created in his honor.

“I feel quite humble about it and I must be honest I will be very proud to see it as I am with the stand, as Blackpool is my team and my town. It is nice to think that anything I have done has been appreciated, all people like to think that.”

He was also known as a gentleman on the pitch. He never got sent off and was only booked one time. That happened in a FA-Cup match against Norwich City. He said this about the situation a couple of years later:

“I had played more than 500 league games by then so the referee was almost apologetic.”

He was born In Denton but the family moved during the Second World War to Blackpool. It was at Bloomfield Road in Blackpool that Joe Smith discovered him during a practice game. Armfield’s team won with 4-1 and he scored all the goals for his team. This made Smith so impressed that he offered Armfield a trial with the club. He joined the team at the age of 17 after he had graduated from school. In Blackpool, he became teammate with two of this time’s most famous players in England – Stanley Matthews and Stan Mortensen.

When he made his debut in 1954 he did it in a very strong team. Blackpool had won the FA-cup the previous year after a final that would be remembered as “the Matthews final” – even though Stan Mortensen was the one to score three goals. But Matthews was fantastic in that game and his crosses from the right wing was perfect every time.

Armfield adapted to the Football League fast and became a regular player in the first team. During his national service, he played together with Sir Bobby Charlton. The two of them would also play alongside each other in the national team a couple of years later. Charlton remembers Armfield with joy.

“I knew the man as well as the player, and it was not by chance that we stayed in touch for so long after we both retired. I have missed listening to his authoritative radio commentaries and now I will miss seeing Mr. Blackpool around the scene.”

Another player who also remembered Armfield with joy is Geoff Hurst.

“Jimmy was a great part of our group at the World Cup, one of the great full-backs, and one of the nicest guys you could wish to meet. I got to know him more after the World Cup, playing golf and at the reunions. Just and absolutely super guy and a sad loss.”

With the national team, Armfield made his debut against Brazil at Maracanã in 1959 in front of over 120-thousand spectators. He played in the World Cup of 1962 in Chile where he was dubbed “the best right-back in Europe”. He was also selected the best right-back in Europe in 1963 and 1964. Sadly, two different injuries made him lose his spot in the English national team and instead Alf Ramsey selected George Cohen for the World Cup in 1966. And even though he was a part of the squad that won the World Cup that same year, he didn’t get a medal until 2009. Only the eleven players that was on the field during the final game was given medals but in 2009 the FA persuade FIFA to award all players from that squad and Armfield final got his very much deserved medal.

In 1971, he retired and became the manager of Bolton Wanderers. He helped the team getting promoted to the Second Division in 1973. In 1974, he was appointed the new manager of Leeds United. Leeds had just sacked Brian Clough who turned out to be a disaster that didn’t get along with anyone inside or around the club. Armfield led the team to the European Cup final of 1975 against Bayern Munich. But sadly, for them, they couldn’t beat the German machine. The game itself was surrounded by controversial decisions and the luck wasn’t on Leeds and Armfield’s side. They were denied two penalties in the first half by the French referee. In the first situation, Franz Beckenbauer accidentally touched the ball with his hand but the referee didn’t point to the spot. The second situation involved a heavy tackle on Allan Clarke when he was going to round the goalkeeper Sepp Maier. But once again the referee showed no signs of giving a penalty.

In the second half Peter Lorimer gave Leeds United the lead, only to realize, a couple of seconds later, that the referee had disallowed the goal. The referee took a chat with his assistant after Beckenbauer had pointed out that Billy Bremner stood in an offside position and even though he didn’t touch the ball, he was involved. This caused frustration, both on and off the field and after two late goals from Bayern, the game was over. After the game, disappointed supporters caused damage in the city of Paris (where the final was being played) and to various of private properties. This also included the demolition of a 50-thousand-pound camera as well as a lost eye and broke arm on a German media worker.

UEFA banned Leeds from European football for four years but it was later reduced to only two. However, the controversial was so big that UEFA actually considered to abandoned the whole competition but came to their sense and continued the following year.