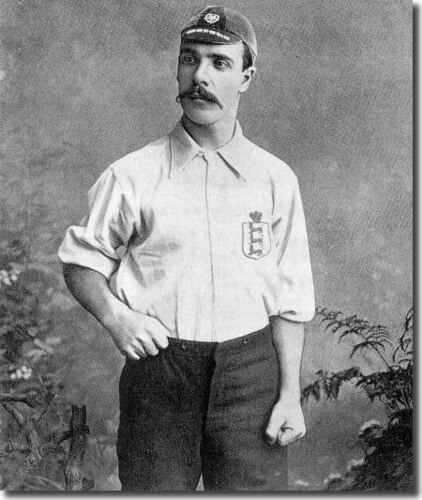 It’s the 17th of April 1888 and a bunch of football enthusiasts are having a meeting in Manchester. The meeting is regard whether a football league should be founded or not. The decision that follows will change the biggest sport forever. On the 8th of September the same year, the first season of the Football league in England starts.

Twelve teams joined the first season with clubs from the Midlands and Northern parts of England. On Deepdale’s pitch that premier day of the season, where Preston North End were facing Burnley FC, stood a 25 years old John Goodall together with his brother Archie.

John was born in Westminster, London back in 1863. He grew up in Scotland since his father was stationed there with his job as a corporal in the Royal Scottish Fusiliers. That was actually the reason they were in London in the first place because he was stationed in Woolwich. His brother, Archie, was on the other hand born a couple of years later in Belfast. Because of the Home Nation rule back then which read that you could only represent the country you were born in, the both became the first brothers in the history of football to represent two different national teams.

He played for Kilmarnock Athletic up until he was 21 years old – then he moved on to Great Lever F.C in England who at that time played frequently in the FA-cup. Although they never reached further than the second round. The debut against Derby was memorable, John scored four goals when Derby were trashed with 6-0. During his period with Great Lever he was spotted by Preston North End’s chairman, William Sudell. Preston was one of the greatest teams back then and had several profiled players. In 1887, they performed an amazing performance against Hyde which still stands today. They trashed them with 26-0 and that is still the record for the biggest win in a FA-cup game.

He was a part of the Preston side that went on to win 42 consecutive games between 1887 and 1888. The streak came to an end in the FA-cup final of 1988 against West Bromwich. But the autumn was coming and with that, the new Football league. Goodall became goalless in that first game against Burnley at Deepdale. But it wasn’t anything to be sad about. Preston won with 5-2 after two goals from James Daniel “Jimmy” Ross and Fred Dewhurst. The fifth goal was scored by Jack Gordon – one of several Scottish players in the side. But both John and his brother Archie was in the scoresheet for the second game of the season against Wolverhampton, which Preston won with 4-0.

Preston went on to be unbeaten for the whole season with 18 victories and 4 draws in 22 league games. John became the top scorer of the division with 21 goals. The FA-cup went a long as planned with five straight victories and the double was secured.

There was more to come for John in that season. He earned his first cap for England against Wales – a game England won easily with 5-1. In 1889, he left Preston for Derby County together with his brother Archie. With Derby, he wouldn’t win so much silverware as he did in Preston but he still became one of their greatest player of all time. He helped a young Steve Bloomer to become Derby’s greatest goal scorer of all time. Bloomer said this about John’s influence on him;

“John took the greatest interest in me when I was a kid. He coached me, secured me a place as one of the greatest players in Derby’s history, played with me and never failed to give me good advice. John was a wonderful footballer, brilliant captain and a natural gentleman. Little did I know about how big this man’s influence would be on my career when he joined from Preston. I always maintain that no player has ever known as much about football and its methods than this old friend of mine.”

Big words from Steve Bloomer who later became one of the greatest strikers England has ever produced. And yes, John was a big gentleman. He was many times referred to as “Honest John” and “Johnny Allgood” for always showing great sportsmanship and respect for his opponents. It also helped Bloomer that John was an excellent passer of the ball. Maybe when one is thinking about a great passer they think about Andrea Pirlo, but John wasn’t far behind. He laid up almost as many goals for his teammates as he scored himself.

In 1900, he signed for the new founded club New Brighton Tower FC which were located in the Merseyside district of England. They had a very ambitious owner who signed a lot of former English internationals. But the success didn’t come, neither for John or the team. He was 37 now and well past his best days. He played a couple of years for Glossop North End before he took the job as a playing-manager for Watford in 1903. That didn’t only provide him with a new and exciting job. He also became Watford’s first manager of all time. He helped the club to promotion and then left the club after seven years in 1910.

But the football career wasn’t over. John loved the game and couldn’t bear himself to quit. He moved to the Northern parts of France and started to play for RC Rounbaix. He then spent two years in a Welsh club before retiring in 1913 at the age of 50.

John didn’t only play football. He was also a very good cricket player and played for Derbyshire while he played football for Derby County. After retirement, he took care of his domesticated wolves and grew vegetables. He died in 1942 at the age of 78. He lived a very rich life with many glorious and precious moments. Perhaps most important; he got to play and earn money from the game he loved more than life itself.

One opponent said that he was “a gentleman with feet that moved in quicksilver”.