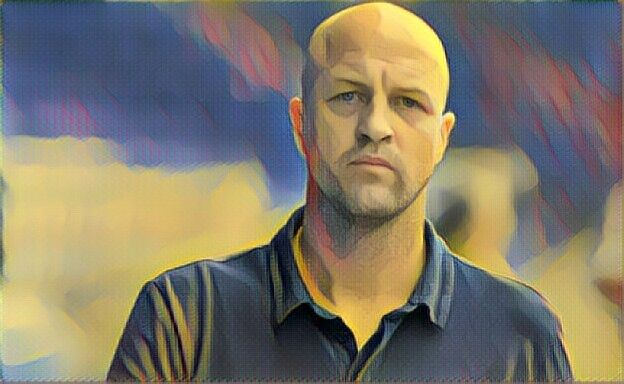 He had prepared for this moment for years. He had studied, listened, watched and taken it all in. He had shrugged off the pressure, the scrutiny that came from being the son of one of the greats. “It’s time for a change” he states. Jordi Cruyff, new Maccabi Tel Aviv manager is ready for the challenge, ready to step into the spotlight once again.

Johan Cruyff knew how important the game was, his coach, Dutch legend Rinus Michels knew there had to be a solution. Barcelona’s first La Liga title in 14 years was within reach but for Johan Cruyff the answer was easy. Wife Danny was due to give birth to their third child and she was adamant the child was to be born in Amsterdam as their two previous children had been.

A compromise was reached and their first son, Johan Jordi was born via caesarean section eight days before El Clasico. Cruyff was in imperious form, scoring the goal of the game in a 5-0 pounding of their Madrid rivals sending them on their way to the title.

Jordi, was known to the Barca faithful already. Even more enamoured by his father’s refusal to christen him Jorge as demanded by the Spanish Franco government, adamant that Jordi would be his name, one shared with the Catalans patron saint. The regime had outlawed the use of the Catalan language but as he was born in the Netherlands the name stayed.

Following a significant fall-out at Barcelona the principled and stubborn Cruyff senior moved his family to the USA to join the nascent NASL. After a brief sojourn playing for Los Angeles Aztecs and Washington Diplomats and a stop off in Spain the Cruyff family returned home in 1981.

Johan was back playing for Ajax with Jordi joining the famed academy. The Amsterdam giants had Cruyff DNA running through it and by 1985 Johan was manager. On his say so the youngest age group through to the first team had the same tactics employed. Everyone on the same page, a philosophy still in place today.

When Barcelona, in need of a new manager came calling in 1988, Jordi followed his father and became one of many bright spots in the La Masia academy. A replica of the Ajax academy and brainchild of Johan back in 1979.

Moving through the ranks Jordi found himself in the Barcelona B team by 1992. Over two years the 20-year-old Cruyff scored 14 goals from midfield in 47 appearances. Back at Camp Nou his father had built a team for the ages, the Dream Team, clinching titles at home and in Europe. By 1994 Jordi Cruyff was now part of it, lining up with such legends as Hristo Stoichkov, Ronald Koeman and Romario. As with most super teams, they have a shelf life. He had stepped up at a time when the star was declining, fans and team mates alike questioned his selection. Was he only there because of his father?

It was this question that had followed Jordi Cruyff around all his life, as much as he owed to his father he strived to stand on his own two feet. In 1995 Johan Cruyff, after several clashes with the hierarchy was sacked by president Josep Lluis Nunez, Jordi knew too that his days were numbered. Nunez was keen to rid any semblance of the Cruyff influence at the club so he jumped at the chance to play in England. Encouraged by his father, who had been intrigued by the English game as a player, he signed for Manchester United. An opportunity to play for a club steeped in tradition with a reputation for stability was too good to pass up.

Jordi worked on his physique to adjust to the demands of the league, a culture shock from his days in Spain. Injuries began to pile up, appearing in only 34 games over four years for the Red Devils, spending 1999 on loan at Celta Vigo.

Despite being part of Premier and Champions League winning squads, his time at Old Trafford is viewed as a failure. A combination of knee injuries and the emergence of David Beckham and Paul Scholes his time in Manchester came to an end at the turn of the millennium when his contract expired.

Moving back to Spain and La Liga rejuvenated Cruyff, and he was back to playing some of his best football with Alaves. Following their relegation in 2002 he moved on to Espanyol where the injury bug bit again and by 2004 he temporarily retired. He was tempted back two years later, playing for Metalurh Dontesk of the Ukraine before taking the player/assistant managers role at Valletta in Malta.

Injuries had meant he was no longer the skillful attacking player of his youth, now employed as a centre half whist involved with aspects of coaching. Having gained his coaching badges to go alongside post graduate qualifications in business management and marketing he retired and took on the job of Sports Director at AEK Larnaca in Cyprus. A new challenge for him but one he relished, working on a small budget, would require a high level of organisation and attention to detail.

Cruyff employed his former Donetsk and Valletta coach as Tom Caanen as manager and AEK Larnaca became the first Cypriot team to qualify for the group stages of the Europa league. This did not go unnoticed and Maccabi Tel Aviv owner Mitchell Goldhar pinpointed him as the man to bring success back to Israel’s oldest club.

With Cruyff at the helm Maccabi won three consecutive titles. An impressive achievement considering the constant change in management. This would be the chief concern for Cruyff, describing the club as a “trampoline” for coaches to further their careers. Oscar Garcia, Paulo Sousa, Slavisa Jokanovic and Peter Bosz all moving on over four years.

In-the-midst of this success his father was diagnosed with lung cancer. The initial prognosis was positive and treatment began in October 2015. In early 2016 Cruyff senior described himself as being “2-0 up” in his battle with the disease, this was not the case. A little over a month later though Jordi and his sisters were summoned to their father’s bedside and were there when he passed away.

As the football world mourned, Jordi Cruyff spoke of his father and how inspirational he had been to his family and people all around the world. The tributes were plentiful, Holland halted their friendly with France in the 14th minute to observe a minute’s silence and Barcelona opened a book of condolence at Camp Nou.

Coming to terms with the loss of his father, he was faced with a professional dilemma. Maccabi had slumped into mid table and the decision was made to replace manager Shota Arveladze. This time Cruyff stepped into the role of head coach, having completed his UEFA Pro A licence. Eight wins out of nine playing expansive attacking football followed and he handed the reins to Lito Vidigal back on track.

A disappointing end to the season saw Maccabi lose the cup final and finish runners up in the league. Cruyff was appointed as head coach this month, permanently this time. Europa League qualifiers are lurking and the squad needs retooling.

Expectations have grown, links to sporting director roles at Everton, Ajax and Barcelona rumoured to have been discussed but for now the managerial hot seat is his. At the same-age his father was putting together the famed Dream Team. Don’t bet against Jordi Cruyff adding to the lengthy list of Cruyff family achievements over the coming years.