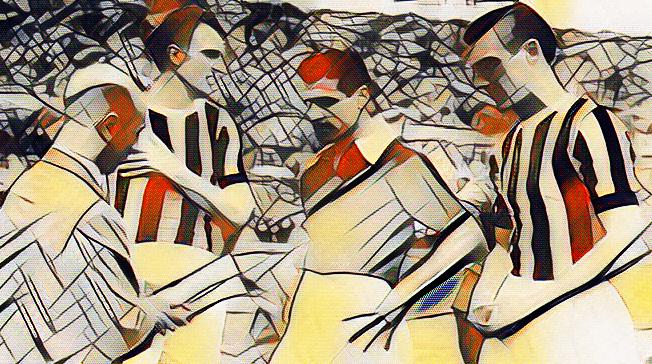 They were all born right after the First World War and started to play for different club’s in Denmark before they became important parts of one of Italy’s biggest club. Together they formed Denmark’s greatest trio in the history of the game.

Born in 1922 Carl Aage Præst started to play for Østerbros Boldklub and during his second season with the youth team he scored an incredible amount of 57 goals in 16 games. In 1940, he made his senior debut for the club at the age of 18. Østerbros was a good side back in those days and one his teammates at this time was Helge Broneé. Broneé was a Danish international and it wouldn’t take long before Præst would be at the same level as well.

In 1945, he made his debut for the Danish national team and to the Olympics games in 1948 he was one of Denmark’s best players as they brought a bronze medal back to Denmark. That was the same tournament were Sweden became champions and possessed a great team that included players as Gunnar Gren, Gunnar Nordahl and Nils Liedholm.

After the Olympics, Præst signed a contract with Juventus. A Juventus side that, among many stars, also included the legend Giampiero Boniperti. But Juventus also included one of Præst’s countrymen, John Hansen.

John Hansen was born two years after Præst but became transferred to Juventus before his fellow countryman. He started to play for BK Frem in Denmark before Juventus got their eyes on him. Juventus owner Gianni Agnelli, who also owned Fiat, was very keen on buying the Danish striker. He was given number ten and the anticipation on him was huge. But the first season with Juventus didn’t start the way Hansen and Juventus was hoping for. It even went so far that Juventus called up the coach of the Italian national team and asked if this really was the same Hansen that scored three times against Italy in the Olympics of 1948.

But when Præst arrived, things started to become better. In the first season together, Juventus won the Serie A and Hansen became the top-scorer of Juventus with 28 goals in 37 games. Præst became a very significant player with his technical ability and perfect crosses that Hansen finished off in a perfect way. To the upcoming season, Præst and Hansen was joined by another Danish player, Karl Aage Hansen. He was the captain of the Olympic side that came third in 1948. Karl Hansen was the oldest of them and had already played for another Italian side. He had represented Atlanta for one season but was now ready for bigger challenges. Hansen was the oldest of these three and together they all formed a feared partnership.

During the season of 1951-52, John Hansen scored 30 goals and became the top-scorer of Serie A when Juventus once more clinched the title. Karl Aage Hansen even stated that the partnership between the Danes was so good that they could find each other in their sleep.

The interesting thing about this trio is that around the same time, Sweden had their most famous trio in the history of football. Gre-No-Li with Gunnar Gren, Gunnar Nordahl and Nils Liedholm became famous when they reached enormous success with AC Milan during the 50s. They were also prominent and successful during the Olympics of 1958(as mentioned above) were they won the tournament. And just as the trio of Danes in Juventus, the Swedes also came from smaller clubs in their home country and wasn’t used to the massive attention they got in Italy. Both trios had to face the same destiny when it came to their respective national team. Since they played professional football they got banned from playing in the national team and instead they could focus entirely on Serie A.

When Præst and John Hansen returned to Denmark they weren’t welcome in the Danish league since they were ex-professionals. They both bought vacation houses in the popular vacation village of Lisleje in Denmark. Præst house became a frequent meeting place for former Danish national player but also younger talent. Together they formed a team that went on to play a couple of unofficial games that attracted huge crowds. This wasn’t popular to the Danish football association and it suddenly made them change their mind about banning formed professionals. It was decided that after two years in quarantine, they were allowed back again.

Præst was the only one in this trio that was selected into the Danish Football Hall of Fame. After his time in Juventus he played for a short period with Lazio before he decided to end his career. He never played in the Danish league again. Both John Hansen and Karl Aage Hansen eventually returned to the Danish league where they both ended their careers.

Maybe these three didn’t reach the same level of glory as their Swedish counterparts. But they should all three be remembered as Denmark’s first superstars in an era when Scandinavian players were the glistering diamonds that every Serie A team yearned for.