The summer of 2017 saw Leicester pull off one of the transfer window’s most unlikely signings, with 20-year old Nigerian striker Kelechi Iheanacho joining the Foxes from Manchester City for £25million, on a five year contract.

It was a move that epitomized Leicester over the past few years in a way; moving away from the relegation-threatened team of three years ago to a team that can compete and cement their Premier League place for future years to come. Of course, by this point we’d come well away from that scenario, winning the league and so on, but even since that, we’re still compared to teams fighting for their lives in the bottom six or seven – this transfer was a real eye opener for a lot of people in the media, not to mention football fans who were excited/shocked by the news. It was a signal of intent from the owners and the coaching staff made to the league, to say that we’re going nowhere and we’re here to get European football again.

However in reality, the transfer of Iheanacho has been about as successful as the Samsung Galaxy Note 7; the only differences being Iheanacho has no recall option unlike the Samsung, and one has set the world on fire, the other not so much…

Scoring just one Premier League goal in 15 appearances, 12 of which as a substitute, has seen the Nigerian move down the pecking order. Four goals in four in the cup however has been crucial for Leicester this season. 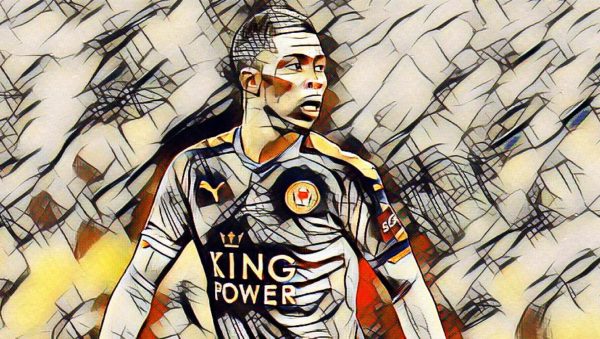 An artistic image of Iheanacho in action

One thing I will say though is that he’s never been ‘prolific’ – he scored four goals in his last season with Manchester City and had scored eight the season prior. So the important question is, was it a £25million gamble that didn’t pay off?

I suppose a lot of his price tag was based on potential. The arrival of Gabriel Jesus to the Etihad Stadium shortened his chances of game time, not to mention the fact Sergio Aguero had kept him out the Manchester City side for most of his time with the Cityzens. Since moving to Leicester, Jamie Vardy and Shinji Okazaki have basically done the same, so has he been given a fair crack of the whip to show what he can do? My opinion is no. If Iheanacho was to start more games, maybe alongside Vardy instead of dropping deep in the number 10 role, we may start to get the best out of him. However at this present moment in time, Puel’s system at Leicester doesn’t suit the Nigerian and because of that, his confidence is low.

His season so far was summed up against Chelsea in the cup last week in two separate scenarios.

The first one was where he lost possession about 30-35 yards from goal and almost instantaneously dropped his head and took a slow jog towards the defender as if he was playing at a local park with his mates or playing Sunday league. Saying that, if that was me playing, I would’ve tried doubly hard to get the ball back and make up for losing the ball, but that didn’t happen here.

The second scenario was where Leicester had a great chance to counter, three on three just past the halfway line. Vardy, Mahrez and Iheanacho against Chelsea’s back three, both Vardy and Mahrez had split the defence apart and all the Nigerian had to do was thread a through ball either side and the end result would’ve been a goal. Kelechi had other ideas, tried feeding Mahrez through but ended up playing a pass three yards behind the Algerian winger and the attack broke down.

I hate seeing players cherry picked and slated individually, but the criticism he got during and after that game was justified. Some would say it was a knee-jerk reaction for some supporters, but the frustration with him has built up over the season and it just so happened that enough was enough this time round. I saw someone on Twitter compare him to a baby elephant who’s just found its feet and in a weird way I can see what they mean. He’s very much a plodder, isn’t the quickest off the mark and this frustrates Leicester fans because we’re so used to quick counter-attacking football and seeing Jamie Vardy terrorise defences, that any change to that philosophy isn’t taken well.

I do believe he’ll come good, I really do. His international team mates Wilfred Ndidi and Ahmed Musa (currently on loan at CSKA) will have helped him embed into Leicester City and will continue to do so, which is always a massive plus point. On social media, he seems to be at home here and looks to be always having fun through dancing, singing or as an extra special treat, both!

What we have to remember is he’s still young, has a lot of learning to do and will need to be sharper and more in tune with the game to be a success here. Realistically, there has to be some substance there with Kelechi because it says a lot that one of the best footballing teams in the world held the striker in high regard, didn’t particularly want to sell him and saw him as part of their future.

Maybe, just maybe this square peg can be moulded over time and that £25 million price tag will pay for itself.