Football, what a sport it is, loved by people from all around the world whether you’re in England, the home of the Premier League or on the other side of the world in Australia where football is starting to grow. One thing that all football fans have in common though despite the various ways we exist is that one same love for the sport, and one boy’s love for football has paid dividends.

People may say the connection between football clubs and the everyday football fan is fading away with all the money in the game now, but there are instances that well and truly trump that argument. 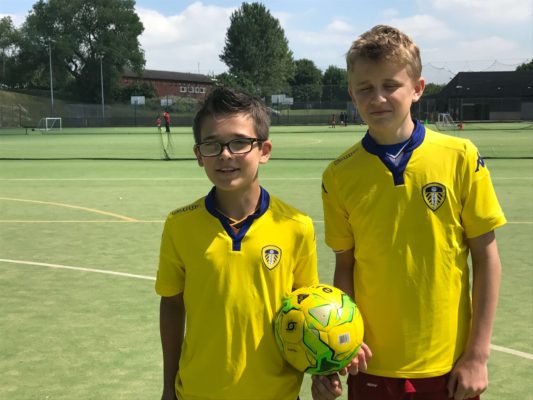 Rhys, who lives in North Yorkshire, unfortunately lives with glaucoma, which affects both eyes and is the most common cause of sight loss as well as aniridia, which causes the absence of both iris and usually affecting both eyes. This would make it increasingly difficult for Rhys to perform on the pitch as it became a challenge for him to see a white ball or team mates wearing white kit.

However, Rhys’ father, David would drive him 122 miles from Leyburn, North Yorkshire to Thomas Danby Sports Campus in Leeds where Rhys would enjoy his specialist sessions run by The Leeds United Foundation for players that are visually impaired. At the sessions fully qualified coaches help young players like Rhys improve their co-ordination, physical well-being and general play as well as making the youngsters more confident when facing the challenges forced upon them.

Since beginning the sessions it’s clear to see that they have helped Rhys as he’s now baring down on the opportunity to participate in an England training camp having gained a place on the Disability Player Development pathway which will see him complete a four week talent programme for visually impaired players.

If you want to know the effect it’s had on Rhys here is how he’s reflected on the experience: “I have really enjoyed the training sessions and I’ve not missed one yet!”

His dad, David, also had a few words to say: “The Leeds United Foundation have been so helpful. Rhys is finding playing with other visually impaired kids better for him as they have had a similar experience. As a parent I have seen how much the sessions have meant to Rhys, it is like he has found his element.

“We’ve also managed to convert him from being a Hull City fan to a big Leeds United fan, such has been the impact of the club and Foundation on his life.”

So, maybe the evolution of the sport hasn’t been such a bad thing, now that many clubs have set up foundations like The Leeds United Foundation, this shows just how big a role football can have in someone’s life, and the importance of sport in general even if some people do think ‘it’s just a game’.