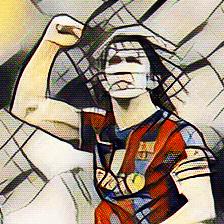 Possibly one of the most instantly recognisable players ever to play the game, Carles Puyol was also a rarity in that he was a one-club man, and a rather successful one at that. The shaggy-haired warrior spent 19 years at Barcelona from La Masia to club captain. Making exactly a century of appearances for Spain, Puyol won nearly every major trophy there is, but is the only player ever to do so without being able to see through his hair at all.

Born on April 13 1978 in La Pobla de Segur, a small province in Catalonia of only 3000 people, Puyol grew up playing a variety of different positions from goalkeeper, to striker, to defensive midfield. It was only when he joined La Masia in 1995 that he was encouraged to play as part of the defense, initially at right-back.

A Catalan through-and-through, Puyol point-blank refused to leave the club in his early career even if Barcelona accepted bids from other teams. In 2003, during a period of financial instability for the club, teammate and future defensive partner Gerard Pique was sold to Manchester United. But even in tough times Puyol insists he never saw himself at any other team, a stubborn determination that would sum up his personality on the pitch in years to come.

After breaking into the first team the next season in 1999, Puyol established himself as club captain after Luis Enrique’s retirement at the end of the 2003-04 season. Shifting over to centre back, he was reunited with Pique and so began a partnership which would lead Barcelona to becoming one of the best teams in modern football.

As if there was any doubt, the records back up Puyol’s reputation as the inspirational captain of the most successful Barcelona side in the club’s history. In his 15 years in the senior team, he won six La Liga titles, three Champions Leagues, two Club World Cups and two Copa Del Reys.

A champion of fair play, Puyol’s aggressive style of play can’t be confused with his gentlemanly personality. There are several examples through his career of respectful gestures, from protecting Malaga defender Sergio Ballesteros after slapping Puyol during a game in 2005, to throwing away a lighter which had struck Gerard Pique and encouraging him to carry on. Puyol’s pure desire just to play the game he loved were visible in his actions. Defending an open goal by stopping a shot with his chest, straight against his heart no less, sums up his passion for defending and for the game.

Despite admitting he was never a technically gifted player, Puyol is proud that his commitment and professionalism has brought widespread praise. He said, “I’m like a student who isn’t very smart but studies hard and ends up okay.”

Teammates and former managers have been a little less modest in their praise, friend and former teammate Xavi adding “You were the best professional I have ever shared a dressing room with, by far. Both before we were winning trophies and during our successful time”.

His professionalism also extended off the pitch into his private life. The opposite of partner Gerard Pique, Puyol always stayed away from controversy, leading a quiet life of very little partying, instead investing himself in reading and yoga.

Puyol’s presence was sorely missed when injuries began to plague him later on in his career. In 2012-13 and 2013-14, Puyol’s long-term knee injuries coincided with Barcelona slumping out of European competitions, showing that while the captain was growing old physically, his mentality and fighting spirit was still irreplaceable.

Internationally, Puyol lead the Spanish national team to triumph, first in Euro 2008 and then to their first World Cup in 2010. At the World Cup, he was ever-present, starting every match in South Africa, scoring a rare goal the semi-final against Germany to send Spain to the final. After missing Euro 2012 with an ACL injury, Puyol captained the team in his last match, also his hundredth cap, in 2013.

The next season would be Puyol’s last, playing just five games as injuries severely limited his fitness. Nonetheless, the Spaniard retired with an incredible record of 593 games for Barcelona. After retiring he said, “I’ve lived the dream of so many young kids, doing what I most enjoy in life, playing football and training.”