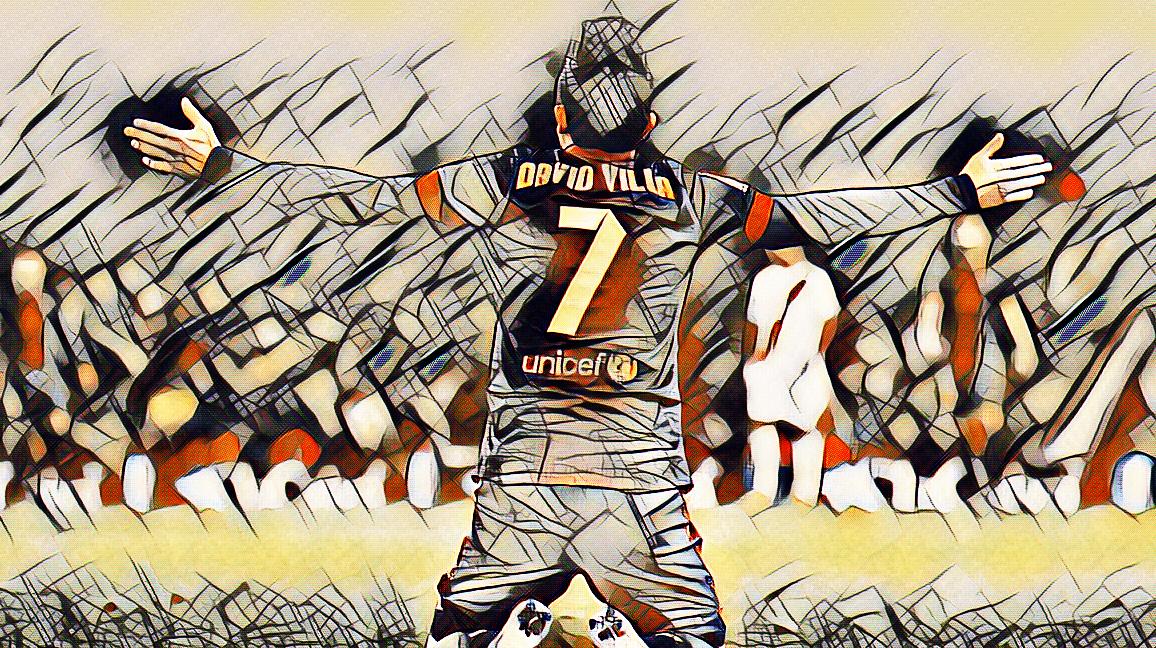 Following his recall to the Spanish national team at the age of 35, our next nominee for ‘Legends of La Liga’ is the evergreen David Villa. True to his nickname ‘El Guaje’ (The Kid), Villa has preserved the energy from his younger years and the lethal finishing that made him such a clinical striker in his prime. With retirement age fast approaching Villa, it is only right we take time to recognise perhaps one of the more underrated strikers of his generation.

Villa’s career started at the turn of the millennium, rising up the ranks with Sporting Gijon and Zaragoza. Some strikers take years to perfect their style of play and improve their goal ratio as they reach their prime. David Villa laughs at those strikers. From Gijon B team to Zaragoza first team Villa maintained an incredibly consistent goalscoring level of a goal every two games.

Initially dismissed as too small, the football world clearly didn’t learn their lesson as they dismissed a young Lionel Messi for the same reason. Thankfully players of all heights are given a fair chance, or else Sebastian Giovinco and Peter Crouch would have had to make it as a comedy duo.

As the world would come to realise, it’s Villa’s off-the-ball movement and intelligence which would be one of his biggest assets. Blessed with an ability to drift so delicately that puddles probably wouldn’t ripple if Villa run over them, naturally he was a defender’s nightmare. To make matters worse for whoever had the unfortunate job of marking him, Villa was equally comfortable on the wing as he was as an orthodox striker.

He also possessed a deadly combination of quick feet, lightning pace and beautifully placed finishing. What Villa has done brilliantly in his later years is his preservation of pace, choosing when to use it so that his off-ball runs are still as effective as ever. His tactical nous and delicately beautiful link-up play means he was always going to be a hit in Spain.

Valencia picked up the 24-year-old forward in 2005, and this is where Villa’s reputation as one of the best finishers in world football would be confirmed. A double against Barcelona, a 50-yard screamer and a five-minute hat trick were among his highlights in just his first season at the club.

Despite major interest, Villa stayed with Valencia for five seasons, with his loyalty being confused for a ‘lack of ambition’ by Bernd Schuster, Real Madrid’s then manager after a move to the club failed.

Despite a turbulent few years for the club, Villa never scored less than 20 goals in a season, scoring 28 in 33 league games in 2008-09. Different managers and systems came and went in those five seasons but what never faltered was Villa’s efficiency in front of goal. In 2010, aged 29, it was understandable when Villa thought the time had come to leave Valencia for the elite club that he deserved. He left Valencia for Barcelona with a record of 129 goals in 225 games.

After being nominated for the Ballon D’or the season earlier, Villa transferred for around €40 million. He scored 18 in 34 La Liga games in his first season, and scored in Barcelona’s 3-1 win over Manchester United in the 2011 Champions League final.

Just two months previously, he became Spain’s all-time leading goal-scorer, overtaking Raul’s record with a brace over the Czech Republic. To put in perspective Villa’s sometimes overlooked reputation, he ‘ended’ his international career after the 2014 World Cup with 59 goals in 95 games, compared to the famous Raul’s 44 in 102.

Villa then went from high to low by breaking his tibia just a couple of months later in the Club World CupThis would be a turning point in his career, missing the majority of the 2011-12 season and Euro 2012 which of course, Spain won. Villa stayed at Barca for the next season but struggled to get back to his pre-leg break form, spending a season at Atletico Madrid before transferring across the pond to the MLS with New York.

Villa has always had faith in the MLS project, stating several times “the MLS can become one of the biggest leagues in world football.”

Perhaps it is a touching tribute to the league which has earned him an international call-up. Now scoring goals for fun, 60 in 90 games to be exact, Villa has proved there is life in the old dog yet, with only two appearances to go before reaching a century for Spain. Now 15 ahead of Raul’s record, Villa deserves his place ourlist of La Liga Legends.