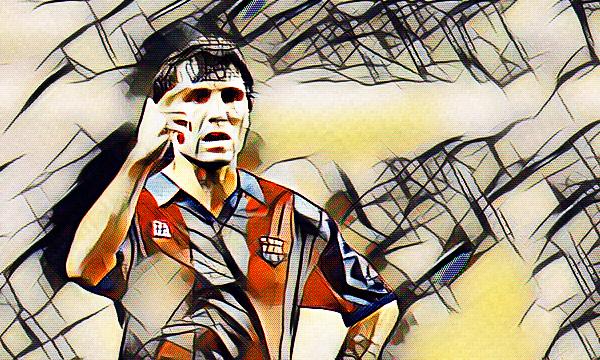 It is sometimes said that the craziest footballers play as a goalkeeper. Oliver Kahn and Rene Higuita immediately spring to mind as the best examples of players who are willing to take shots hammered at them and flying boots and elbows, as well as imprinting their own little bit of mental on the game. There are some notable examples who buck that trend, players who laugh at the fact you have to be a goalkeeper to be crazy. Step forward, Bulgarian genius, Hristo Stoichkov.

Born February 8 1966, in Plovdiv, Bulgaria, Stoichkov’s tale began at local team, Maritsa Plovdiv. He then moved to Hebros Harmanli and became a prolific scorer in Bulgaria’s lower leagues, earning a move to CSKA Sofia in 1985.

A gifted mentalist from a young age, at aged 19, Stoichkov was involved in one of the most extraordinary cup finals you will ever hear about. Putting the 2010 World Cup Final to shame in terms of dirtiness, the 1985 Bulgarian Cup Final was on another level. A handball goal, an own goal, a handful of fights, some controversial refereeing decisions in which the referee was hit, and two red cards (including Stoichkov, obviously). In the end, Sofia won 2-1 and Stoichkov was one of five players to be given a lifetime ban, which was later rescinded.

After that introduction to the world of football, or rather football’s introduction to Stoichkov, he developed into a striker with immense potential. Year upon year he improved in his home country, winning the 1989-90 European Golden Boot, scoring 38 goals in 30 games. By the time he secured a move to Barcelona in 1990, Stoichkov had won four league titles, four domestic cups and scored 111 goals in 151 games for Sofia.

Stoichkov carried his legendary aggressiveness with him to Spain, being banned almost immediately for two months for stamping on a referee’s foot. Good start. This didn’t stop him from becoming an integral part of Johan Cruyff’s ‘Dream Team’, which included Ronald Koeman, Pep Guardiola, Michael Laudrup and Andoni Zubizarreta. The team became formidable and gave the club the most successful period in their history, winning four La Liga titles in a row between 1991-94.

Stoichkov also featured in the 1992 European Cup Final for Barcelona at Wembley. Cruyff’s Dream Team faced off against a famous Sampdoria side including the likes of Gianluca Pagliuca, Toninho Cerezo, Gianluca Vialli and Roberto Mancini. Stoichkov hit the post but the game was only decided in extra-time, with a 112th minute winner from Ronald Koeman.

One of the beautiful sights of football is watching Stoichkov’s deadly partnership with his polar opposite, Romario. One of the very few criticisms levelled at Romario was his work-rate, which was no problem for Stoichkov. It is fair to say the Bulgarian had an engine, and despite being a physically strong player, he was surprisingly quick and agile. For every free-kick he rifled into the top corner, there was a delightful turn and delicate finish to match.

However, the tenacity which made him a key part of the famous Barcelona team, was also at times, his downfall. Stoichkov frequently argued with officials, but in his later career, one incident went a step further. In 2003, playing in a friendly for DC United in his twilight years, he broke an opposition player’s leg and was sued in 2006 for the tackle which was labelled ‘criminal’. While the case was settled financially, it summed up the other side to Stoichkov’s game which was always only one bad decision away.

After winning the Ballon d’Or in 1994 and being named runner-up for FIFA World Player of the Year in 1992 and 1994, he then led the national team on a famous run in the 1994 World Cup. Bulgaria made it to the semi-finals, knocking out champions Germany in the upset of the tournament, with Stoichkov on the scoresheet. While brave Bulgaria bowed out in the semis, he finished top scorer in the tournament with six goals. Over 20 years later, that 1994 squad is still deemed the ‘golden generation in the Bulgarian national team.

Back in club football, Stoichkov left Barcelona in 1995 and briefly returned after a season at Parma. When he left for good in 1998, the striker had a record of 162 goals in 336 games for the Spanish club, as well as 17 trophies.

After knocking about places such as Al-Nassr and Chicago Fire, Stoichkov finally retired at DC United in 2003. Besides his rocket of a left-foot, the Bulgarian will always be remembered for his ‘colourful’ personality on the pitch, and his undying self-belief off it. No better is this summed up than in an incredible quote about himself, by himself.

“I have always spoken my mind, I am not a coward and always express my opinion, even when it is not correct.”