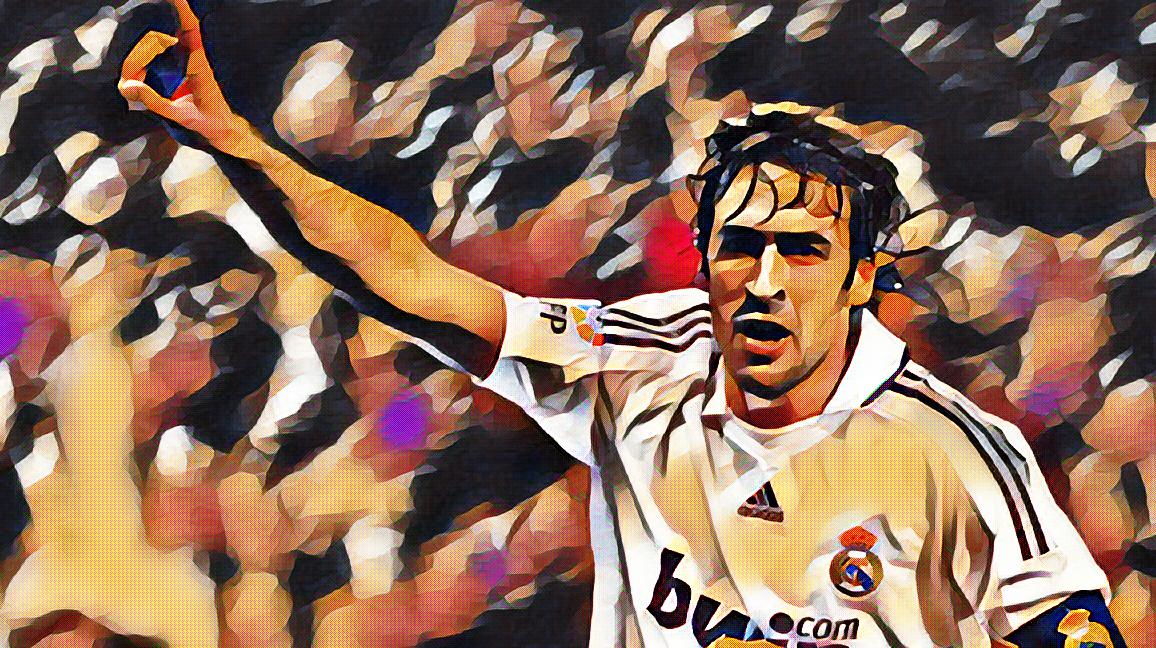 This is a tasty one. Often overlooked in the list of best players of his generation, this Spanish forward was one of the coolest finishers ever to step foot on the Bernabeu pitch. Equally as gentlemanly as he was ruthless in front of goal, he went on to become the top goalscorer in his club’s history as well as Champions League history, all without receiving a single red card. The player in question? Raul.

With a name like Raul Gonzales Blanco, he was almost destined to become a Real Madrid legend. Born on 27 June 1977, Raul grew up in the suburbs of Madrid and initially joined the Atletico Madrid youth setup as his father was a loyal fan.

However, when Atletico’s youth academy closed as a result of some questionable-at-best financial strategies, Raul made the switch to Real. His natural talent meant his rise to the first team was swift, making his debut as their youngest-ever player in 1994, at just 17.

He was heralded as the natural heir to Emilio ‘the vulture’ Burtagueño, and initially formed a formidable partnership with Ivan Zamorano. El Butre was quickly phased out, and the era of Raul had begun for Madrid.

His first taste of success came when Madrid won La Liga in 1995, his first of six, and won the Champions League three years later, still aged just 21. He was named captain in 2003 and formed another potent partnership, this time with Fernando Redondo.

Over his 16 years at the club, Raul would lift a ridiculous amount of trophies and awards. On top of his six La Liga titles, he won three Champions Leagues, two Pichichi trophies, four UEFA Club Forward of the Year’s, and Ballon d’Or Runner-up in 2001.

A scorer of every type of goal, Raul was the definition of a classy operator. What stood out was not just the number of goals he scored, but with the quality in which he did so. Whether it was a chip, a volley or a deft finish from a cross, Raul could do it all. Even more impressively, he did it without looking like a player who had the pressure of being the talisman for one of the world’s biggest, and most ruthless, teams.

It is bizarre to think that Raul’s main competition at the time for the striker spot, was wonderkid-turned-commentary icon, Michael Owen. But the story of how good Owen actually was in his prime is one for another day.

Back to our main man, in a team full of Galacticos including Zinedine Zidane, Roberto Carlos, Ronaldo, and David Beckham, Raul was the home-grown favourite. He was Mr.Madrid, born and raised which no other Galactico could ever claim no matter what they did for the club.

Becoming the first player to score in two Champions League finals (2000 & 2002), Raul never shied away from a big game. He went on to become the all-time Champions League goal-scorer with 71 goals, an incredible feat in the pre-Lionel Messi and Cristiano Ronaldo era.

In fact, before Cristiano Ronaldo, Raul was the holder for a large amount of Spanish records. He was Madrid’s record appearance maker with 741 games, their record goal-scorer with 323, as well as Liga’s second-top goal scorer. Before our present generation when one goal per game is expected from the world’s best players, Raul was the one who delivered.

Just as he had inherited El Butre’s place, the arrival of Ronaldo signified the end to Raul’s reign. On his last appearance, Raul scored despite being injured during the game, with Ronaldo ironically assisting with the cross. He left the club in 2012 for Schalke, a decision inspired by the fact they had made it to the Champions League that season, where a player of Raul’s quality rightfully belonged.

For Spain, Raul was again the player on which the team relied on, but never reached the status that he did at club level. That’s not to say that he failed by any means, 44 goals in 102 games is an identical ratio (0.43) to the one he managed for Madrid. A similar story to Wayne Rooney, he held his country’s all-time scoring record, yet never received the praise his statistics deserved.

However, Raul’s time came agonisingly close to the period when Spain begun their dominance, winning two Euros and a World Cup. He was dropped from the team, and retired from international duty soon after in 2006, just two years before Spain won the Euros, kicking off their success.