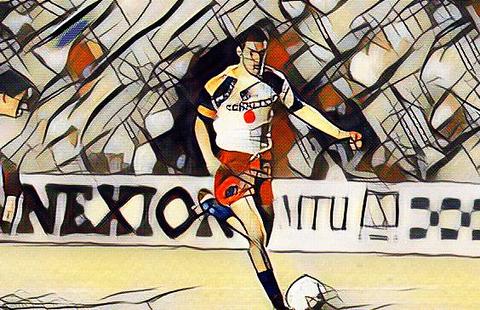 When any football fan enters a ground through the turnstiles, it’s unlikely that their mind will be focused on anything other than an attacker dancing their way towards goal, before giving the goalkeeper the eyes and sticking the ball calmly past them. Perhaps they might even think about a midfielder spraying possession from right to left; a sporting metronome that delicately controls the tempo on the field. The furthest thing in their back of a fan’s mind at that moment is more than often a defender heading the ball clear from a dangerous set-piece, or throwing their body on the firing line for their team.

As fascinating a skill as defending is, it just isn’t as attractive as a roulette, or an unnecessary nutmeg. However, throughout footballing history, there have been many players who have tried to change this perception, and one of them is Laurent Blanc; perhaps one of the best defensive-minded players the world has ever seen.

Born in Ales, France, on November 19 1965, Laurent Blanc played like a man who never wanted to be the final line of defence between an attacker and the goal throughout his early years. His youth career began at Montpellier, and he signed his first professional contract with the club in 1983.

Blanc demonstrated in his early years that he was a player gifted with boundless technical ability, but not a lot of pace. Despite this, he was originally fielded as an attacking midfielder for his first club, and helped guide them to the French Division 1 in 1987. His initial role of playing the strikers in on goal didn’t hinder his own goal tally, as he notched an impressive 18 goals throughout that title-winning season.

His threat in front of goal didn’t sway Michel Mezy, the former French international and manager, who convinced Blanc to drop back into defence and ply his trade there. His physical attributes, combined with his impressive passing range, made him an effective sweeper throughout his remaining years at Montpellier. Blanc even managed to score at least 12 goals in his last three seasons, mainly through headed finishes and from the penalty spot.

As Blanc left Montpellier, he would depart as the club’s record all-time goal scorer, a record that still stands proud today. His form in France lead to some of Europe’s biggest clubs taking a close look at the sweeper, but Napoli were the next to secure his signature.

However, Blanc was unable to full assert himself in Italy, despite scoring six goals in Serie A, and left after only a year; joining Nimes in 1992. His short spell there came to an end when Blanc moved to St Etienne, where the Frenchman finally began to settle back into his football again. His impressive performances at the back were almost nearly not enough, after les Verts found themselves on the verge of relegation. In the end, St Etienne were only able to remain in France’s top flight when Marseille were denied promotion due to financial problems at the club.

Blanc’s affinity with French football continued when Guy Roux, the long-standing manager of Auxerre, convinced the Frenchman to play for his club. Blanc shook off an early-season injury and commanded from the back, helping lead Auxerre to a double in the 1995/96 season.

In many ways, turning out for Roux’s team led to Blanc putting in some of his best performances, and this caught the attention of European-giants, Barcelona. The Blaugrana’s then-manager, Johan Cruyff, was a deciding factor in helping sign Blanc. But, as soon as the Frenchman put pen to paper, Cruyff was sacked on the very same day.

Following this, Blanc’s single in season in Barcelona was largely disappointing for both players and supporters. Despite winning the Supercopa de Espana, Blanc picked up an injury against Extremadura, meaning he was ruled out of the Cup Winners’ Cup final against Paris Saint-Germain. The Frenchman departed Spain, and headed back to where his career had truly taken off – his home country.

Blanc was convinced to join Marseille, where he quickly established himself once again as one of the country’s best centre-backs, if not the world’s. The French club finished fourth in Blanc’s first season back, with the now-veteran centre-back earning himself the nickname ‘Le President’ because of his stalwart performances in the back line.

The next season was both positive and frustrating for Blanc, after Marseille finished second in Ligue 1, narrowly missing out on the title by one point. The club also reached the UEFA Cup final, but fell to a 3-0 defeat to Parma, with a short back-pass from Blanc helping the Italians open the scoring.

Despite the late season disappointment, Sir Alex Ferguson wasn’t deterred from signing up Blanc for Manchester United, initially on a one-year contract for the 2001/02 campaign. Arsenal won the Premier League that season, and Blanc’s early performances were criticised as United fell away in the title race.

The next season, however, saw Blanc pick up only his second league title through his career, and retire from professional football on a high. Ending his time on the pitch under the floodlights at the Theatre of Dreams perhaps was the most romantic way, and Laurent Blanc is certain to go down forever in football history books as the man that redefined what it meant to be a defender.