Paris Saint-Germain fell to their first defeat this season away at Strasbourg, while title challengers Lyon and Monaco both picked up three important points. Elsewhere in France, Lille’s recent lift in form sees them rise out of the relegation zone after a nervy home win over Toulouse, and Marseille’s impressive season continues despite an stalemate at Montpellier.

Read below for all the Ligue action this weekend:

Dijon triumphed in a mid-table clash in the first fixture this weekend, following a tight 3-2 victory over Bordeaux.

It was the away side who took the lead after 13 minutes. Alexandre Mendy was thwarted on the goal line following a quick break away, but Jonathan Cafu was on hand to bend an effort inside the far post, and hand his side the advantage.

Dijon began to pile on the pressure, and soon got their reward. Xeka whipped in a dangerous corner, that was flicked towards goal by Cedric Yambere. Bordeaux goalkeeper Costil threw out a leg, but was unable to prevent the effort deflecting off him and in.

Just two minutes later, Bordeaux retook the lead, through what is sure to be one of the finest goals of the season. Malcom picked the ball up inside the Dijon half, strode forward and unleashed a scorching shot that flew into the top corner.

A few minutes after the restart, the home side were level. A lofted ball into the channel found Wesley Said, who squared across for Benjamin Jeannot to stab home past Costil. And it was Dijon who would go on to find the winner.

A flowing move on the edge of the box saw Xeka release Said, who span the defender and rifled home into the top corner, to hand his side the three points.

Guingamp edged out Troyes in a tight clash at the lower end of the table, in a game that saw both teams reduced to ten men.

The home side created the best of the early openings, as Saif-Eddine Khaoui drove forward before letting loose a low shot towards goal that was held by Karl-Johan Johnsson. It was Troyes’ goalkeeper to impress next, when Lebogang Phiri’s curling shot looked destined for the top corner, before Samassa got across well to save.

The away side did eventually find the breakthrough. A delivery from a corner bounced through the box before landing at the feet of Jimmy Briand, who lashed home across Samassa.

On the stroke of half time, Francois Bellugou was shown a red card by the referee, after a low lunge on Marcus Thuram.

The away side would also be reduced to ten men, when Ludovic Blas picked up his second yellow card following a rash challenge after losing possession. Guingamp held on for the win, which sees them move three points clear of the relegation zone.

Rennes comfortably beat Amiens, to continue their recent impressive form and pick up their fifth win in the last six games.

The home side started off the strongest, and went close to opening the scoring when Benjamin Bourigeaud lashed an effort against the far post. After a strong first half, Rennes came out in the second looking to take an early lead.

Wahbi Khazri’s impressive form this season nearly continued, when Bourigeaud teed him up. The Tunisian international fired an effort into the ground, which bounced up and forced Regis Gurtner into an impressive stop. Khazri did eventually find his goal, after twisting past the Amiens back line and drilling an effort into the bottom right corner.

The home side wrapped up the three points in the 84th minute, when Benjamin Andre nodded home Bourigeaud’s delivery. The result means Rennes sit to sixth, while Amiens’ three straight wins comes to an end.

Nice lifted themselves further clear of the relegation zone, after a 3-1 victory over bottom of the table Metz.

After only ten minutes, Mario Balotelli should have opened the scoring for the home side. Alassane Plea threaded through the Italian, whose shot was well smothered by Eiji Kawashima. But in the 26th minute, Metz’s goalkeeper was beaten when Plea fired home at the back post, after Metz failed to clear their lines.

In the 64th minute, Mario Balotelli stood poised over a free kick. The former Manchester City strike bent one that looked to be heading into the top corner, before it deflected off the wall and wrong-footed Kawashima.

Allan Saint-Maximim rounded off the scoreline, after rifling home a powerful, dipping effort into the far corner.

The home side took the lead after only two minutes, when Radamel Falcao planted a header past Alexandre Letellier. Adama Diakhaby stooped low to nod an effort narrowly wide of the Angers goal, in a half mostly dominated by Leonardo Jardim’s side.

The away side could have equalised ten minutes after half time, when Karl Toko Ekambi’s low driven shot was well smothered by Danijel Subasic. Angers had efforts through Fulgini and Tahrat that were narrowly missed, and Monaco held on for an important, if unattractive, three points that keeps them in the title hunt behind Paris Saint-Germain.

The home side had the brighter of the earliest opportunities, when a deep corner had to be palmed clear by Alban Lafont, before the Toulouse goalkeeper was quick to smother the follow-up. Lafont was forced into another impressive stop, when Yassine Benzia drove a low shot towards the bottom corner.

Just after the hour mark, the home side took the lead. Benzia found Nicolas Pepe on the edge of the box, who drove forward before unleashing a scorching effort that flew in off the underside of the crossbar.

Deep into added time, the referee pointed to the penalty spot after Lille’s Fodo Ballo-Toure’s handball in the area. Andy Delort stepped up, but his spot kick was well saved by Maignan, who quickly got across to his right hand side, and sealed an invaluable three points.

Paris Saint-Germain’s grip on the Ligue 1 top spot loosened slightly, after a surprise defeat away at struggling Strasbourg.

After 13 minutes, the home side took a deserved lead. Dimitri Lienard whipped in a dangerous free kick, which Joia Nuno Da Costa nodded home past Areola.

Soon after, the league leaders could have equalised. Javier Pastore drove in a low cross that found the feet of Kylian Mbappe, whose audacious back heel was well blocked in the six-yard box. Julian Draxler then should have scored, after he drove into the penalty area before narrowly bending a shot wide of the far post.

Unai Emery’s team continued their pressure, and finally found the equaliser. Adrien Rabiot drilled in a low ball, which Mbappe thundered home into the roof of the net three minutes before half time.

In the 65th minute, PSG were pegged back again. Stephane Bahoken latched into a flicked header, before racing through and firing past Areola and into the roof of the net.

The introductions of Edinson Cavani and Marco Verratti wasn’t enough for the league leaders, whose gap at the summit has been narrowed. Strasbourg have now opened up a two point gap above the relegation zone, and sit in 16th.

Marseille’s recent unbeaten form continues, after a scrappy away draw with Montpellier.

The home side carved out the best early opportunity, after Stephane Sessesgnon’s low drive forced a good stop from Steve Mandanda. Marseille’s goalkeeper had to be alert once again shortly after, when Isaac Mbenza curled a shot into his chest.

Montpellier did eventually get their reward, when Giovanni Sio latched onto a ball across the box and fired an effort towards goal, which Mandanda could only palm into the roof of his net.

But on the stroke of half time, Marseille were awarded a penalty when Morgan Sanson’s swivel and shot struck Hilton the arm. Florian Thauvin stepped up and fired his spot kick home, past the despairing dive of Benjamin Lacomte.

Neither side could find a winner in the second half, meaning that Marseille are now level on points with both Lyon and Monaco in the race to catch Paris Saint-Germain.

The away side took the lead after ten minutes, when Maxwel Cornet tucked home after a scramble in the penalty area. But Lyon were soon on the wrong end of a cross-shot from Adama Mbengue, whose effort struck the base of the far post before being cleared behind.

Ten minutes after the restart, Lyon doubled their lead. Mariano controlled a dropping ball just outside the penalty area, before lashing home on the volley across Remy Vercoutre’s despairing dive.

After Caen struck the post, the home side did eventually half the deficit. Ivan Santini tucked home at Anthony Lopes’ near post, but his team couldn’t find a way through for the equaliser. The victory sees Lyon sit nine points behind the league leaders.

Mid-table Saint Etienne were held to a 1-1 draw at home with Claudio Ranieri’s high-flying Nantes.

The home side should have scored after only ten minutes, but Bryan Dabo could only watch on as his strike from inside the penalty area cannoned off the cross bar. Saint Etienne did eventually open the scoring ten minutes before half time, when Vincent Pajo received the ball from Jonathan Bamba before firing an effort into the top left corner.

But just after the hour mark, Nantes were level. A lofted ball into the box wasn’t cleared properly and Emiliano Sala nodded home after a defender’s clearance struck him. Neither side could find a winner, and the result means that Ranieri’s team sit in fifth place, while Saint Etienne’s poor home form continues. 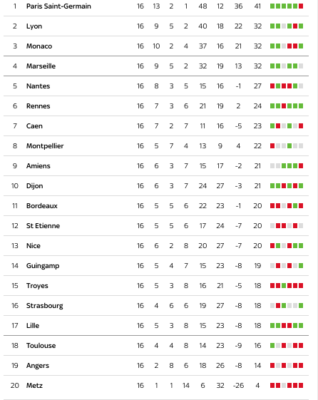