Paris Saint-Germain recovered from their shock loss last weekend, as they comfortably dispatched Lille at the Parc des Princes. The race for a Champions League spot next season is also heating up, as Monaco and Lyon both picked up important, late victories. Elsewhere in France, high-flying Nantes fell to a disappointing home defeat and Guingamp were impressive in their comfortably home rout over Dijon.

Strasbourg have lifted themselves out of the relegation mire after a 3-0 away win at Bordeaux, who now sit just two points above the drop zone.

It was the visitors who took the lead after two minutes, when Stephane Bahoken slotted home from Martin Terrier’s pass. Bahoken’s finish was incisive, after receiving the ball in the centre of the box and drilling home into the bottom right corner.

After Lukas Lerager and Jonathan Cafu squandered their chances, Strasbourg won a free kick in the 37th minute, after Younousse Sankhare brought down Jean Eudes Aholou. Dimitri Lienard stepped up, and found the back of the net with a wonderful left footed effort.

It was a game of missed chances for the home side, and Strasbourg ruthlessly capitalising. Just after the hour mark, the away side wrapped up the three points. A break away from a corner kick found Martin Terrier, who slotted his effort home into the bottom right corner to seal the three points.

Toulouse are now one point above the drop zone, after a comfortably home victory over mid-table Caen. Before the weekend, the home side hadn’t picked up a win in their last five fixtures, and had dropped alarmingly down the table.

The opening stages of the first half were quiet, until Ivan Santini tested the Alban Lafont in the Toulouse goal with an effort down the middle of the goal. Toulouse then had their first opening in the 27th minute, when Andy Delort’s delivery was met by Christopher Jullien whose header was well saved.

The first half ended goalless despite the sheer volume of good chances, and it took a mistake to break the deadlock after the interval, when Damien Da Silva inadvertently found the back of his own net and handed Toulouse the lead.

Toulouse wrapped up the game when Da Silva’s game went from bad to worse, as he brought down Max Gradel inside the penalty area. The Bournemouth loanee tucked his penalty home into the top left corner to seal the three points, and a much needed victory for Toulouse.

Monaco continued their pressure on Paris Saint-Germain and Lyon at the top of the table, after a remarkable late comeback over Troyes.

Troyes currently sit in 17th place, with only one win in their last six matches, but the underdogs started well at the Stade Louis II. They defended well, and took their first chance of the game. Saif-Eddine Khaoui received the ball after a neat flick-on, before jinking into the box and curling an effort towards the far corner. Danijel Subasic got down comfortably, but was unable to hold onto the shot, allowing Suk Hyun-Jun to stab into an empty net.

Just three minutes later, Monaco went close to levelling. Keita picked up the ball outside the area and thundered a shot off the bar and away. The rebound fell to Djibril Sidibe who lashed a shot towards goal that was well saved by Mamadou Samassa.

After the interval, Troyes grabbed themselves an unlikely second. Suk Hyun-Jun raced onto a lobbed through ball, but as Danijel Subasic looked to clear, the ball rebounded off the striker and allowed Troyes to double their lead with ease.

After the goal, Monaco flooded toward and found a route back into the game through Mathieu Deplagne’s own goal.

In the 85th minute, Monaco were level. Joao Moutinho whipped in a delivery, and Guido Carillo guided a header across Samassa and into the far corner. Carillo would eventually go on to become the match winner, when a deep free-kick was nodded across goal by Kamil Glik, allowing Carillo to nod home at the back post.

Bottom of the table Metz were held to a home draw against Rennes.

Metz are currently thirteen points from safety, and are certainly relegated at the end of the season. However, the home side led for the majority of the contest, and were unlucky not to see out the rest of the game.

In the 41st minute, Emmanuel Riviere passed to Florent Mollet, who buried an effort into the top right corner with his left boot. Metz had more chances to score before half time, but both Riviere and Renaud Cohade were denied well by Tomas Koubek.

Despite more missed chances in the second half, it looked as though Metz would hold on for only their second win of the season. However, in the 86th minute Faitout Maouassa delivered, and Firmin Ndombe Mubele fired home from six yards to steal a point for Rennes, leaving them in sixth place.

In a battle between two mid-table teams, the home side came out comfortably 4-0 victors.

The early pressure came from Dijon, but the away side were soon reduced to ten men when Oussama Haddadi was shown a straight red card after a lunge on Jonathan Pereira. Pereira soon had to be replaced as a result of his injury, but Guingamp continued to flood forward looking for the opener.

In the 37th minute, the deadlock was broken. Pedro Rebocho delivered into the penalty area, and Jimmy Briand found the back of the net with a left footed finish. Three minutes later, and it was two-nil. Yannis Salibur converted from six yards across Baptiste Reynet, and Guingamp went into the break leading comfortably.

Jimmy Briand struck the bar from outside the box five minutes after half time, as Guingamp continued their dominance. Minutes later, Briand would tee up Marcus Coco, who converted from close range for three-nil.

Christophe Kerbrat was the next player to earn themselves a place on the score sheet, when Nicolas Benzet’s corner was nodded home in the centre of the box. The result means that Guingamp have now pieced together two impressive victories in a row.

Angers fought back to earn a point against Montpellier, but still remain three points of safety in 19th place.

The first opening of the game fell to Montpellier, when Junior Sambia fired his effort straight at Alexandre Letellier following Paul Lasne’s pass. In the 27th minute, Karl Toko Ekambi saw his effort towards the bottom right corner well saved by Benjamin Lecomte.

In the 51st minute, the away side took the lead. Jerome Roussillon was well denied by Letellier, but Isaac Mbenza was on hand to tap home from close range. However, just five minutes later Angers were level.

The scoreline ended all square, meaning that Angers are still in the relegation zone, while Montpellier sit in seventh, remarkably just five points from the drop zone.

The runaway league leaders continued their march towards the Ligue 1 title, with a comfortably home victory over strugglers Lille.

The away side defended well, but were eventually broken down just before the half hour mark. Kylian Mbappe delivered an inviting cross from out wide, which Angel di Maria nodded home past Mike Maignan to take the lead.

A frustrating half for PSG ended, with last season’s runners-up having created chances but struggling to turn them into efforts on target. However, just four minutes after the interval they had extended their lead.

Angel di Maria turned provider, as he picked out Javier Pastore inside the penalty area who fired home emphatically into the roof of the net. Late into the game Kylian Mbappe was well denied by Maignan, but the young Frenchman did eventually go on to find the back of the net after Anwar El Ghazi halved the deficit for Lille.

PSG quickly broke from a Lille corner, and as Maignan was up for the set-piece, Mbappe was threaded through. The striker rode a challenge well, and slotted home into an empty net to wrap up the three points for the league leaders.

Nice came from behind to beat Claudio Ranieri’s high-flying Nantes.

It was the home side who took an early lead, when Yacine Bammou fired home after only 12 minutes, following a cutback from Emiliano Sala.

The first half saw various chances squandered by both teams, with Mario Balotelli firing narrowly wide from just outside the box, and Koffi Djidji also shooting just past Walter Benitez’s post.

But on the stroke of half time, Nice did eventually find the back of the net. Jean Michael Seri curled in a delivery from a corner, and Alassane Plea rose highest to nod home across Ciprian Tatarusanu and into the far corner.

The second half followed a similar trend, until Mario Balotelli produced a moment of brilliance to secure all three points for his side. Allan Saint-Maximin laid off to the former Manchester City striker, who curled a shot inside Tatarusanu’s near post with a sublime first time shot.

The result means that Nantes currently sit in fifth place, but are now eight points behind Marseille.

Lyon continued their pressure on the league leaders, after a last minute winner secured all three points.

The home side, who currently sit just three points above the relegation zone, scored with the first attempt on goal in the game. Serge Gakpe received the ball inside the penalty area after nine minutes, and stabbed home past Anthony Lopes to opening the scoring.

Amiens surged forward in pursuit of a second, but Moussa Konate and Serge Gakpe were well thwarted by Lopes.

Lyon’s struggles continued after the interval, when they could have gone two-nil down. Oualid El Hajjam fired an effort towards the top right corner, which Lopes got across well to save. And against the run of play, Lyon found the equaliser when Tanguy NDombele pulled the ball back across the box for Houssem Aouar to slide in and finish.

The game would take another dramatic twist in the 88th minute, when Amiens were awarded a penalty. Gael Kakuta stepped up, but watched on as his effort cannoned off the woodwork and away.

In the 94th minute, the away side stole all three points. Mariano picked out Aouar, who drilled an effort past Regis Gurtner to remain nine points behind Paris Saint-Germain.

Marseille kept up the pressure on Monaco and Lyon after a comfortably home victory over struggling St Etienne.

The home side opened the scoring in the 11th minute, when Valere Germain nodded home from six yards after Florian Thauvin’s in swinging delivery. Germain could have grabbed another in the 26th minute, when he met Payet’s cross with his head but saw the effort saved by Ruffier.

Five minutes after the interval, St Etienne were down to ten men after Ronael Pierre Gabriel was shown a straight red card by the referee. And in the 71st minute, Marseille capitalised on their man advantage. Florian Thauvin picked out Germain in the box, who fired home into the bottom corner.

In the 80th minute, the home side wrapped up the three points. Jordan Amavi passed to Lucas Ocampos, who beat Ruffier with a low, drilled effort into the far corner. The victory means that Marseille are now on level points with both Monaco and Lyon in the race for an automatic Champions League spot next season. 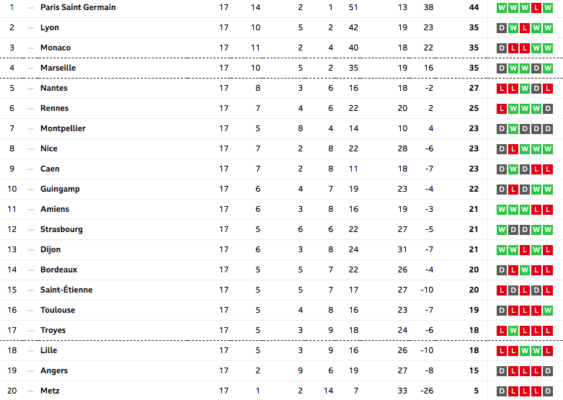