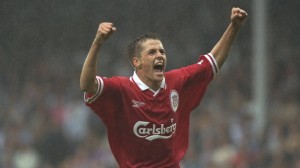 They grew up together, they played together, they won together, and they lost together. Now, quite fittingly, Jamie Carragher and Michael Owen bow out together. Room-mates for years and best friends off the pitch, within six weeks of one another, they have both announced that they are to retire at the end of the season.

As a child I donned a Liverpool kit with Owen 10 on the back. I would spend hours working on my finishing, mimicking Owen’s goals and celebrations. This particular sub-plot doesn’t have a happy ending, I am an awful footballer and I never made it despite a wicked left foot.

Electric pace, clinical finishing. This is the Michael Owen I knew. Often the subject of ridicule since his move to Newcastle United, Owen officially retires in May, but in all fairness, Liverpool’s Michael Owen left the game long ago.

I fell in love with football in 1998. Football fell in love with Michael Owen in 1998. Nothing excites a nation more than a youngster coming through the ranks. During the 90’s, England were blessed with striking talent to match any other, arguably the best pool of striking talent in the world at the time. Alan Shearer, Teddy Sheringham, Ian Wright, Robbie Fowler, Stan Collymore, Les Ferdinand, Andy Cole, Chris Sutton, Dion Dublin but to name a few. For a young striker to thrust his way onto the international scene is quite something. To do it with all those players around him is something else. Owen was too good to ignore.

Two moments for me which would shape Owen’s career, two moments which leave us this morning watching old clips and flicking through old pictures of him celebrating, predominately in and England shirt with David Beckham chasing him with a massive grin on his face. The first, quite predictably, was June 30th 1998- England’s second round match against Argentina where he scored a sensational individual goal after beating defenders Roberto Ayala and José Chamot with a run from the half way line. The audacity for a player so young to attempt such an outrageous goal was testament to the boy. The fearless lion took on world class players on his own, and had it not been for Beckham’s rush of bloody later in the game, might just have pulled it off.

The second moment is that of sadness. Owen’s electric pace was his greatest ally. Liverpool’s game was revolved around feeding him through passes and long balls. During a match against Leeds United at Elland Road in April 1999, a clever run by Owen saw him through, but seconds later he pulled up, grabbing the back of his leg, stumbling as if he’d been shot in action. England, not only Merseyside held its breath as he was stretchered off. This was the beginning of a problem which ultimately puts him in the position he’s in today.
He made a full recovery from injuries and but never went a full season without one. Goals would often dry up, but you could never keep him away.

In 2001, Liverpool’s first leg of a historic treble saw them face Birmingham City in the Worthington Cup Final at the Millennium Stadium, Owen was an unused substitute as Liverpool scraped past the first division side. It was a controversial decision by Gerard Houllier to leave Owen on the bench and he was understandably frustrated. Only three months later, Liverpool were back in Cardiff, Owen had a point to prove.

As daylight robberies go, May 12th 2001 is up there with the best, or the worst, depending how you look at it. Liverpool were outplayed to such an extent against Arsenal in the FA Cup final, at times, it was difficult to believe that these two teams were in the same league. Owen’s two goals won Liverpool the cup, the first an instinctive finish in the box but his ever a goal epitomized Owen, it was the winner.

A stunning ball from Patrick Berger left Owen with much to do. After out muscling Lee Dixon, Owen’s pace took the ball away from Tony Adams and he shot hard and low past David Seamen to send the travelling Kop into bedlam. There was only one spot in the goal Owen could have scored from such was the difficulty of the angle and he found it. A world class marksman at the top of his game, Michael Owen had the world at his feet.

His greatest night in and England shirt came four months later when he scored a hat trick against Germany. Owen scored goals in two World Cups and two European Championships. His England record ended with 89 caps and 40 goals, only injuries robbed him of every record going.

Two years after he was crowned European Footballer of the Year, much to the dismay of Liverpool fans, Owen made his move to Real Madrid. There is a lot said about the manor which Owen left but this isn’t a day to be going into details of that. He had earned his move to Madrid, and did a good job out there. Only 12 months later he was back in England with Newcastle United and only days after scoring his first hat trick for the club against West Ham United, he broke his metatarsal in a collision with Tottenham Hotspur goalkeeper Paul Robinson and was a doubt for the World Cup.

He was rushed back in time and made the plane to Germany, but in the final group game, a damaged anterior cruciate ligament ended his tournament, and in many people’s eyes, his career. Despite flashes of brilliance, The Michael Owen we knew and loved was gone.

It’s easy to reflect and think “What might have been”- what Owen achieved in a short period of time was up there with the very best. He has every medal in the game. In a perfect world, Owen would take the applause after his final game, donning the red shirt of Liverpool- having never left the club. The Kop would sing his name as tears stream down his face. Reality means Carragher will stand alone at the Kop after the match against Queens Park Rangers.

There may be moments in Owen’s career which Liverpool fans will never forgive him for, but 297 games and 158 goals speaks for itself. Owen left a legacy at Anfield and was focal to many memorable successes. When it really counted, he produced the goods. He isn’t faultless. Jibes of greed and Judas will be branded around, but as a Liverpool fan, I am great full we saw his best years,

He was a special player, and today has merely jogged the memory of the greatest English striker of his generation.

Motorway Police dig out Liverpool FC for lack of silverware