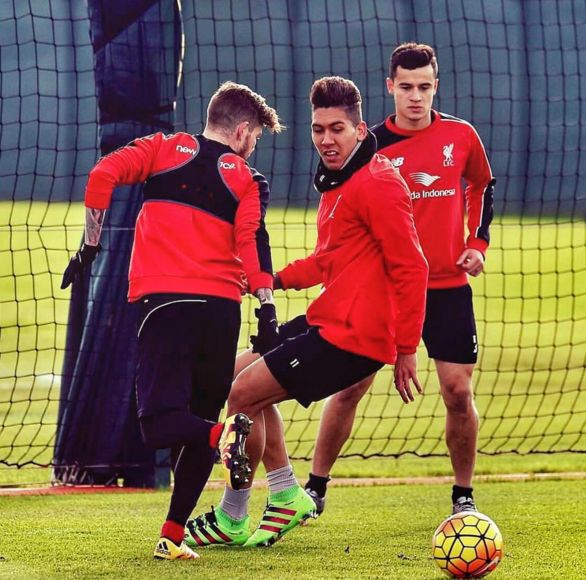 Liverpool star Alberto Moreno has confirmed he is keen to make his comeback from a hamstring injury in Liverpool’s Premier League clash with Tottenham at Anfield on Saturday. The 23-year-old full-back, who has been a regular for manager Jurgen Klopp since the former Borussia Dortmund boss took over from Brendan Rodgers in October 2016, has confirmed that he has taken advantage of the Reds trip to Tenerife during the international break to complete his rehabilitation ahead of the last crucial part of the campaign.

The Spanish left-back missed the past two matches against Manchester United and Southampton with a hamstring problem but returned to full training during last week’s warm weather training camp in Tenerife. Moreno confirmed the good news to the official Liverpool FC wesbite: “I started training with the team in Tenerife. Everything went well and I haven’t felt anything else.”

“I hope to be ready for the next game against Tottenham and for the rest of the season. The main thing was training and keeping fit but it’s true that after training we had some moments to relax and go to the spa and the beach, and it helped to clear up our minds a bit. However, during the trip, we didn’t only relax as we were always thinking of improving and making the most of the training. Overall, it was a great experience.”

Saturday’s visit of Spurs is followed by the first leg of the Europa League quarter-final away to Borussia Dortmund. Moreno is positive that Liverpool can win the Europe League trophy while aiming to end the league in the best possible way.

“We need to keep working to get there,” he added. “We are closer to winning the Europa League title, although we still have a few games left. However, we still believe that we can win it. The Premier League is more difficult but we are working really hard to get a higher position in the table.”

Liverpool were forced to rearrange their back-line with the inclusions of James Milner and Jon Flanagan after Moreno missed Liverpool’s Premier League defeat against Southampton and the European League draw with Manchester United after he damaged his hamstring in preparation of the trip to Old Trafford, but it looks like the manager will have Moreno back for the coming game against title-contenders Tottenham.