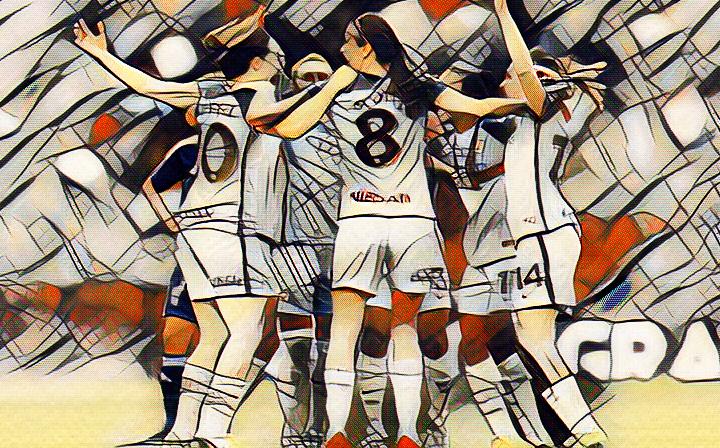 A record crowd of 35,271 saw Manchester City Women’s FC secure their first FA Cup Trophy since being re-launched in 2014 as part of Sheikh Mansour and Khaldoon Al Mubarak’s infrastructure investments.

It has been five years since Birmingham City won their last major trophy. They reached the semi-finals of the Champions League in 2014 while missing out of the Women’s Super League crown on the final day of that very same season. In comparison, Manchester City reached the semi-finals of the Champions League this season but were beaten by a strong Lyon side despite notable performances from Carli Lloyd. Manchester City have won the Continental Cup on two occasions (2014 and 2016) with both games finishing 1-0. Most notably, their last win came against Birmingham City after extra time back in October last year. In terms of league performances, Manchester City won the Super League by completing an unbeaten season with previous winners Chelsea finishing in second place. The FA Cup was the only domestic trophy left for City to win.

FA Cup finals are normally rather dull affairs and in the pre-match build up this game didn’t promise much either. Both teams played each other 10 days ago in a bore 1-1 draw in a game that saw very little quality on offer. However, Steph Houghton’s ladies rose to the occasion and put on a performance that any team would be proud of. Birmingham matched City in the early stages before right-back Lucy Bronze got in front of the Birmingham defence at the near post and neatly flicked Megan Campbell’s inswinging free-kick after 18 minutes. This was when the momentum really swung in City’s favour. Isobel Christiansen looked calm and composed in the centre of midfield with Nikita Parris using her speed and agility down the right wing to ensure City began to control the game. Just seven minutes later an impressive run down the right by Bronze to the by-line and a carefully lofted ball across to just beyond the penalty spot found Christiansen, who showed superb technique and composure to catch the ball on the half-volley into the back of the net. Birmingham’s vulnerability to crosses and any kind of high ball was capitalised on once again in the 32nd minute as a short corner found its way to Campbell whose trusty left foot crossed it elegantly towards the back post to Carli Lloyd. Despite Ann-Katrin Berger coming out in an effort to claim the cross, she flapped at thin air as the ball planted itself onto Lloyd’s head and then the back of the net.

It was game over by this point. Birmingham were bereft of ideas going forward as they continued to sit a little too deep as their game plan had gone out the window. Half time was Birmingham’s saving grace as it allowed them to re-compose themselves and talk about making changes. They did sit further forward in the second half but they never really imposed themselves. In the 73rd minute, they did manage a consolation goal through Charlie Wellings. A bit of luck with the rebounded cross coming back to a Birmingham player with the ball eventually finding its way to Wellings who smashed the ball with her left foot into the bottom right of Karen Bardsley’s goal. Sadly for Birmingham, it wasn’t the start of the great escape. Jill Scott found herself with a bit of time and space to smash the ball into the roof of Berger’s net in the 80th minute to finally seal the deal and put the game beyond doubt.

Another deserved win for the Manchester City juggernaut as they continue to set themselves apart from the rest of the teams below them. It’s a stark reminder of how much progress a team can make when given the amount of investment they have been given. Manchester City treats the women’s team in the same way that they do the men’s team as they continue to lead the way for women’s football in the UK and Europe as a whole.