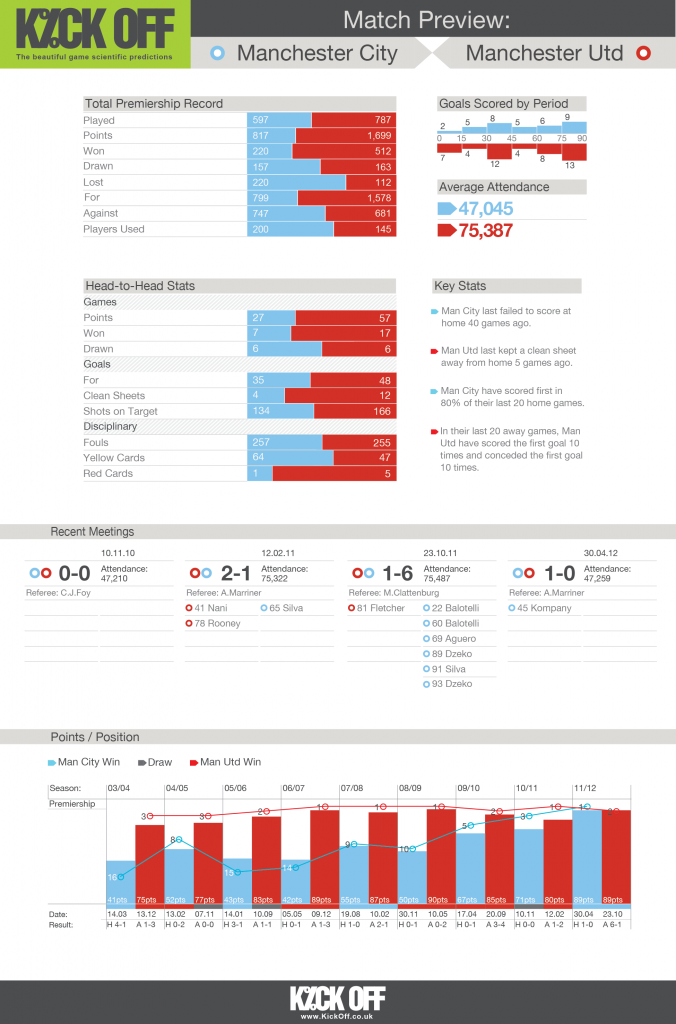 This graph clearly indicates just how far Manchester City have come in a short space of time. Whilst Manchester United have remained constantly inside the top three, their near-neighbours have been transformed from perennial strugglers into the champions of England.

The derby games from last season will long be remembered by those of a blue persuasion. Although Manchester United triumphed 3-2 at the Etihad Stadium in the FA Cup, the two defeats that they suffered in the Premier League (shown above) ultimately cost them the title. The entire world took notice when Roberto Mancini’s side triumphed 6-1 at Old Trafford and they were right to do so.

Manchester United have dominated the Premier League era and these numbers are testament to that. Sir Alex Ferguson’s charges have amassed more than twice as many points as Manchester City, albeit from more matches, scoring nearly twice as many goals in the process. What is most striking, however, is that City have used far more players than United, clearly indicating that they have been striving to attain the levels of success enjoyed by their greatest foes.

Going Head-to-Head in the Premier League

No surprises on the attendance front, though the move to the Etihad Stadium has enabled more Manchester City supporters to witness the derby games.

Manchester United have enjoyed the better of the derby games overall, though five of the seven Manchester City successes have come on their own patch. It is also interesting to note that only six red cards have been shown in 30 top-flight meetings between the two sides, with five of those going to Manchester United players.

Watch out for goals in the final 15 minutes of either half as these have traditionally been the periods when both teams have tended to enjoy scoring success against each other. The opening 15 minutes could also be key, with history showing that Manchester United have outscored City by seven goals to two early on in proceedings.

With no other sides appearing capable of challenging for the Premier League title, results between these two teams could again go a long way towards deciding the destination of the silverware. Neither outfit has clicked into top gear thus far, with City struggling to find their attacking rhythm and United looking less-than-assured defensively. It is testament to both that they are still winning when not at their best, but I would expect a marked improvement from those in red and blue on Sunday.