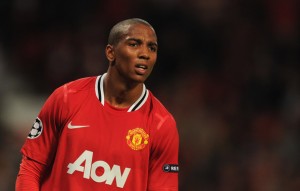 There might not be much room for debate around whether Manchester Unted needs to employ the midfield diamond more often or stick to their wingplay tradition if the indifferent form shown by the wingers in the current season continues – in particular, Ashley Young.

The decision to spend 17 million (source: BBC Sport) on Young last season confounded many fans. Nani, Rooney and Welbeck could all play down the left (the latter two in a 4-3-3). Ryan Giggs and Fabio Da Silva could also perform decent cameos on the left. Hence, with the well known problems being in central midfield, it was baffling that Sir Alex would spend big for another winger, especially one that wasn’t known for scoring samba goals but instead did everything that existing players already did week in, week out for United.

A probable idea would have been to employ Young more ‘in the hole’, as the creative outlet between the midfield and attack, and to take over the dead ball situations. But he has been ineffective in both fronts, and despite showing some promise in the first three months of the season, quickly fizzled out. A return of 6 goals and 9 assists for a midfielder is good, but not for a 17m attacking midfielder who had 17 assists in his first full season at Aston Villa and 14 in his last season prior to arriving at United. Even Alex Song, who played a more withdrawn role for Arsenal, had 11 assists last season.

The poor form has continued into this season. After returning from injury, though he has been a regular starter, his performances have been anything but frustrating for the fans.Failure to run past defenders, inability to whip in a decent cross, and wasting dead ball situations aren’t the reasons why Ferguson would sign a winger. Despite this, injury to Nani and Kagawa means that he is the only option on the left wing. Or is he?

When Cristiano Ronado was at United, Rooney often played down the left. It might not be his favoured position, but in a 4-3-3, he could be more flexible with Van Persie occasionally moving to the left during a game. Or Welbeck, who played on the left during his successful loan spell at Sunderland two seasons ago, could also interchange with Rooney in this, or a more mobile 4-3-1-2. On Kagawa’s return, he could play in the hole in this formation and switch places with Rooney on the left. Besides this, Ferguson can also use the diamond structure that was successfully employed against Braga and Newcastle.

Fact of the matter is that Ashley Young is not indispensable. There are other players / formations that can render his position irrelevant. Antonio Valencia might not be in great form this season either but he still manages to beat defenders down the right and put a cross in. Moreover, he links up very well with Rafael down the right flank. At the moment, Young doesn’t have much going in his favour and it won’t be long before, like the fans, the manager runs out of patience too and tries to cut his losses.